'I Dare You to Mock Me.' Capt. 'Sully' Sullenberger Defends Joe Biden Against Attacks on His Speech in New York Times Op-Ed

Chesley "Sully" Sullenberger, a retired airline captain famous for landing a commercial jet on the Hudson River, celebrates the five-year anniversary of "The Miracle on the Hudson" in New York City, on Jan. 15, 2014.
Andrew Burton—Getty Images
By Sanya Mansoor

Retired airline captain Chesley “Sully” Sullenberger opened up about his history with stuttering in a response to the “cruel remarks” from President Trump’s daughter-in-law mocking Joe Biden‘s speech.

Sullenberger, a former pilot best known for landing a commercial jet on the Hudson river in what came to be known as “The Miracle on the Hudson,” authored a New York Times op-ed on Saturday about his experiences wrestling with speech.

He recalled the “anguish” of being called on in grade school. “My neck and face would quickly begin to flush a bright red, the searing heat rising all the way to the top of my head; every eye in the room on me; the intense and painful humiliation, and bullying that would follow, all because of my inability to get the words out,” Sullenberger wrote.

It’s these same feelings that Sullenberger says “came rushing back” upon hearing Lara Trump’s recent comments she made about the former Vice President at a Trump campaign event on Friday. She said she feels “kind of sad for Joe Biden” when he speaks, and prompted, “Joe, can you get it out? Let’s get the words out, Joe.”

Biden has long admitted to overcoming a stutter. In a profile by The Atlantic published last November, Biden said, “Stuttering gave me an insight I don’t think I ever would have had into other people’s pain.”

The former Vice President also acknowledged it when Sarah Huckabee Sanders jabbed him on Twitter last month when he told a story during the sixth Democratic primary debate about mentoring a child with a stutter.

Sullenberger wrote in the Times about how he learned to enunciate words slowly and overcome bullying. He expressed concerns about how Lara Trump’s message might affect children who have similar experiences to him.

“What might a child who stutters, as I did, feel when they hear a grown-up on a public stage trying to make a bunch of other adults laugh by ridiculing a public figure who also stutters?” He wrote.

He had a message for children who may be affected by such a “culture of cruelty:” “You are fine, just as you are. You can do any job you dream of when you grow up.” He pointed to his own success as a U.S. Air Force fighter pilot, airline pilot and public speaker.

“A speech disorder is a lot easier to treat than a character defect,” Sullenberger wrote in his op-ed. “You become a true leader, not because of how you speak, but because of what you have to say — and the challenges you have overcome to help others.”

Sullenberger also praised Biden’s decision to be open and and speak “courageously” about the difficulty of dealing with his stutter. 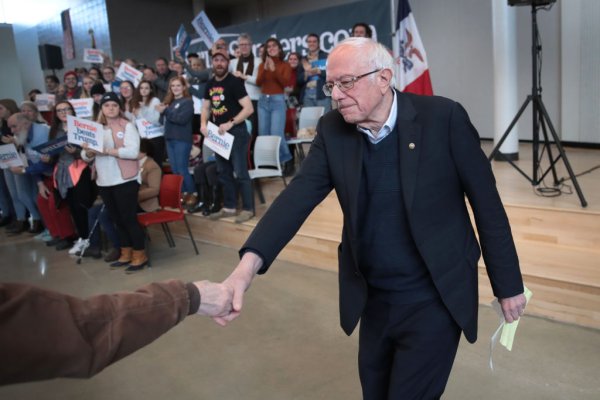 How Bernie Sanders Is Betting on Outrage
Next Up: Editor's Pick