“To be clear was not trying to make fun of anyone with a speech impediment,” she added in a second, also-deleted tweet as she faced swift backlash. “Simply pointing out I can’t follow much of anything Biden is talking about.”

Biden has repeatedly spoken about working to overcome his boyhood stutter to become an effective public speaker, such as in a recent profile in The Atlantic that explored whether any remnants of his stutter could be emerging during the Democratic debates. Biden described the ways both students and teachers mocked him for his speech as a child, and the ways he’d practice passages from literature in the mirror at night to work on speaking fluidly.

“Stuttering gave me an insight I don’t think I ever would have had into other people’s pain,” he told The Atlantic.

Biden hit back at Sanders with a tweet of his own later Thursday night: “I’ve worked my whole life to overcome a stutter. And it’s my great honor to mentor kids who have experienced the same. It’s called empathy. Look it up.”

Sanders then apologized to Biden.

“I actually didn’t know that about you and that is commendable. I apologize and should have made my point respectfully,” she wrote.

In a 2015 letter to the Stuttering Foundation of America, Biden wrote, “I personally understand the terrible fear and frustration of a stutter. My stutter embarrassed me and made me question myself and my abilities daily… I promise you—you have nothing to be ashamed of, and you have every reason to be proud.” 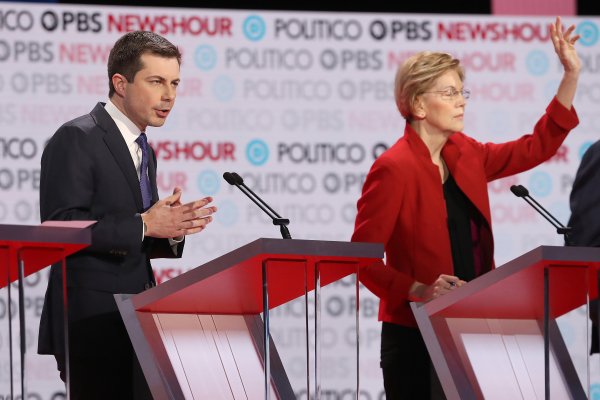