'We Made a Mistake.' National Archives Issues Apology for Altering 2017 Women's March Photo

Protesters walk during the Women's March on Washington, with the U.S. Capitol in the background in Washington, D.C., on Jan. 21, 2017.
Mario Tama/Getty Images
By Jasmine Aguilera

The National Archives has apologized for altering a photo of the 2017 Women’s March in Washington, D.C. that has been on exhibit since last May.

On Friday, The Washington Post published a story about the Archive’s “Rightfully Hers: American Women and the Vote,” exhibit that featured a photo from the 2017 Women’s March, held the day after President Donald Trump was inaugurated. The picture was altered to blur out multiple protest signs that criticized Trump and made reference to women’s body parts.

“We made a mistake,” an Archive spokesperson tells TIME in an emailed statement. “As the National Archives of the United States, we are and have always been completely committed to preserving our archival holdings, without alteration… We apologize, and will immediately start a thorough review of our exhibit policies and procedures so that this does not happen again.”

Images from the 1913 and 2017 Women's Marches were displayed as a promotional graphic in the elevator lobby outside the entrance to the "Rightfully Hers" exhibit at the National Archives in Washington, DC. The image was removed January 18, 2020 and will be replaced.
Courtesy National Archives. Photo by John Valceanu

In one instance, a sign on the photo was digitally altered to blur the word “Trump” on a sign that read “God Hates Trump,” according to the Post. The word “vagina” was blurred in another sign that read “If my vagina could shoot bullets, it’d be less REGULATED.”

An Archive spokesperson told the Post that it had altered the photo “so as not to engage in current political controversy,” and to make sure the exhibits were appropriate for children.

The Archive’s decision was met with criticism from historians and free speech groups.

“The government can’t airbrush history or erase women’s bodies from it,” said ACLU deputy legal director Louise Melling in a statement. “It is the job of the National Archives to document history, not alter it to serve the President’s ego.”

An archive spokesperson tells TIME the display has been removed and will be replaced with unaltered images. “This photo is not an archival record held by the National Archives, but one we licensed to use as a promotional graphic. Nonetheless, we were wrong to alter the image.” 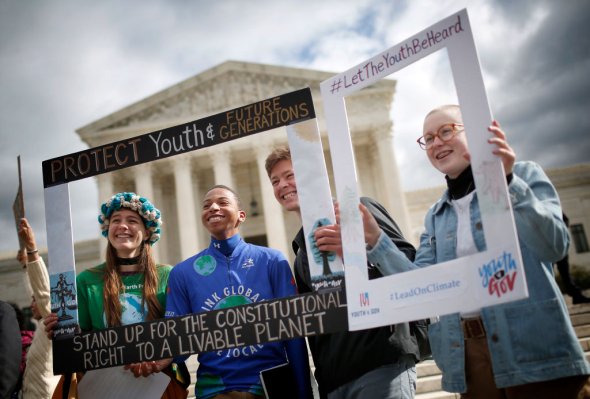 A Federal Court Threw Out A High Profile Climate Lawsuit. Here's What It Might Mean For The Future of Climate Litigation
Next Up: Editor's Pick