The White House broke the law when it withheld U.S. security aid to Ukraine that had already been appropriated by Congress last year, the nonpartisan Government Accountability Office reported on Thursday.

“Faithful execution of the law does not permit the President to substitute his own policy priorities for those that Congress has enacted into law,” the decision states, adding that the Office of Management and Budget “withheld funds for a policy reason, which is not permitted under the Impoundment Control Act.”

The issue of why and how $400 million in security assistance to Ukraine was frozen is at the center of the impeachment of President Donald Trump, and the government watchdog’s decision comes just days before the Senate trial is set to begin. Trump was impeached by the Democratic-controlled House in December, and charged with abusing the power of his office by engaging in a months-long pressure campaign to get the newly elected Ukrainian president to open probes into his political rivals. The hold-up of the security assistance, which Ukraine says it desperately needs to fend off Russian aggression, was allegedly used as leverage.

Democrats were quick to jump on the decision in order to continue their push for witnesses and additional evidence to be allowed at the Senate’s impeachment trial.

“This bombshell legal opinion from the independent Government Accountability Office demonstrates, without a doubt, that the Trump Administration illegally withheld security assistance from Ukraine,” Sen. Chris Van Hollen, a Maryland Democrat, said in a statement. “The GAO’s independent findings reinforce the need for the Senate to obtain all relevant documents and hear from key fact witnesses in order to have a fair trial.”

The White House has previously defended the holdup of the aid, saying it was reviewing the programs, and has noted that the aid was ultimately released.

“We disagree with GAO’s opinion,” OMB Spokesperson Rachel Semmel said in a statement to TIME. “OMB uses its apportionment authority to ensure taxpayer dollars are properly spent consistent with the President’s priorities and with the law.”

But recently released internal government emails, as well as transcripts of closed-door depositions and interviews with TIME, show that both Pentagon and OMB officials became increasingly concerned that what they were being asked to do could violate this very law. The Impoundment Control Act of 1974 requires the executive branch to spend money as appropriated by Congress.

Under that law, the President “has narrow, limited authority to withhold appropriations,” GAO General Counsel Thomas Armstrong said in a statement on Thursday.

The White House budget office told GAO that it withheld the funds to ensure that they were not spent “in a manner that could conflict with the President’s foreign policy.” The law does not permit OMB to withhold funds for policy reasons,” Armstrong concluded.

Over the course of the impeachment inquiry, it came out that Trump told his acting chief of staff Mick Mulvaney to hold back almost $400 million in military aid for Ukraine in the week before his now-infamous July 25 call with Zelensky.

The hold was formally withheld on the day of the call, and was extended nine times through a footnote that marked it as a temporary hold. On July 30, OMB official Michael Duffey, a political appointee, took over control of the aid from Mark Sandy, a career budget official — something no one in the division recalled happening before.

When he asked why the aid was being held up, Sandy was told that the order came from the president himself, according to his closed-door testimony. 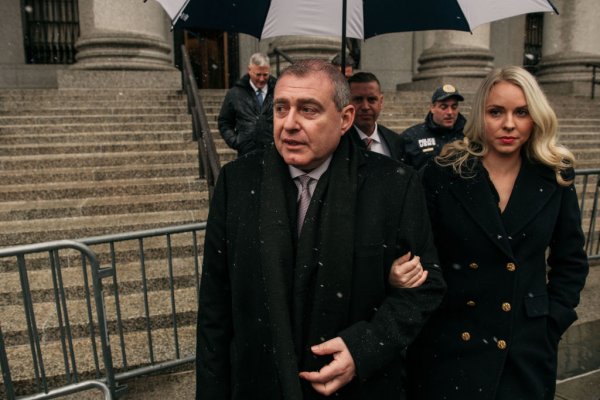 Parnas Says Trump Knew About Campaign to Pressure Ukraine
Next Up: Editor's Pick