Dogs can provide inspiration for the most masterful works of art. Sometimes it’s a painting of a friendly poker game or sometimes it’s the artistic landscaping in a neighbor’s backyard, something that was on full display in this photo that blew up this week.

An image of a Corgi puppy named Luna posing with the utmost pride and a large hedge trimmed to resemble what appears to be her ears and a tail has gone viral, since it was first posted by Matt Cruise a.k.a. @matt_cruise.

“Neighbors are a big fan of Luna apparently,” he wrote. It has been liked nearly 170,000 times since posting.

Of course this sensation of a dog collected plenty of praise and awe from the collective minds of the internet who shared their feelings about it. Some said they loved it. In a following tweet, the Twitter user appeared to clarify “I’m not familiar with the folks,” who trimmed the hedge.

“It’s my friend’s neighborhood. I happened to see a giant hedge that was the same shape as my dog so I thought I would have her pose in front of it,” the owner, Matthew, told TIME.

Evidently Luna loves to strike a pose and “this photo is no different,” the owner said. “In the moment I thought it was a great photo op so I couldn’t help but have my dog pose in front of it,” he said.

But as internet denizens were fully engrossed in the image, some wondered if the trill trimmer known as Edward Scissorhands was responsible for the canine-like landscaping.

The sensation of a dog is clearly loving being a muse. This moment is about the triumph of the animal spirit. And it is truly something to behold.

The owner’s Instagram post only helped the photo along to viral status. Get to know Luna a little better below. 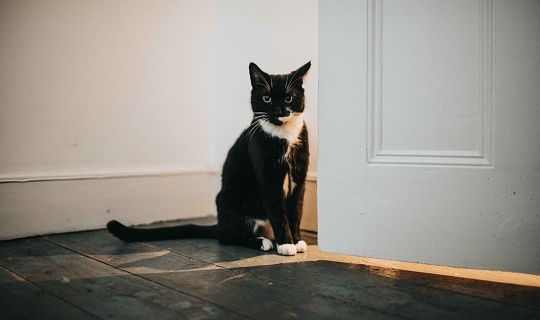 Three Coyotes Fail to Impress Unfazed Cat Named Max in This Showdown
Next Up: Editor's Pick