'Women Don’t Give Up.' Why Female Protesters Are at the Forefront of India's Resistance Movement

Nusra Ara had only just fallen asleep when the phone rang. It was 10 a.m. on Tuesday and though she had returned home seven hours earlier, she stayed up cooking, cleaning, packing lunch boxes and then dropping her daughter to school. When she picked up the call, a fellow protester’s voice rang out in panic and made her sit up. Soon she was rushing out of her home through the busy, narrow streets of Shaheen Bagh in South Delhi, toward the site where she and thousands of other protesters, mostly women, have gathered every evening for more than a month.

Making her way past shabby buildings and newer apartment blocks, through alleyways filled with restaurants, car repair shops, schools and clinics, she reached just as the news she had heard on the phone was beginning to spread: the police were about to arrive. Within minutes, women streamed out of houses and alleyways and the relatively empty protest site began ringing with chants, poetry and the Indian national anthem. As the crowd surged, the police retreated from the gates of the protest. Meanwhile, at the site a 65-year-old grandmother, Shabnam, sits attentively listening to a speech. As the speaker begins chanting slogans of freedom and liberty, Shabnam joins in. “I have never been to a protest. I have never spoken at this pitch. I have never wanted to be heard or seen,” she says. But now I say, let’s march on Parliament. Let them see us.”

Since December, crowds across India have mobilized to protest against the government of Indian Prime Minister Narendra Modi, after it passed a law that many see as discriminatory against Muslims. In Shaheen Bagh, a working-class, majority-Muslim neighborhood, the protests began with a small, peaceful sit-in and candlelit vigil by local women, including Ara. For 32 days, the protesters have blocked the major highway connecting the Indian capital to Noida, a satellite town. Some 10,000 to 20,000 protesters gather here every evening from all over the city, while the local women take turns to keep the site—a marquee with a makeshift stage for speakers—occupied day and night. On Sunday, more than 150,000 gathered here.

“We have forgotten our homes, we have set aside our family obligations and responsibilities,” Ara, a 43-year-old homemaker, says, wearing an embroidered black burqa. “We are fighting for our rights, our children’s rights. Our existence, their future.” Nearby, another protester on a makeshift stage reads out the Preamble to the Indian Constitution, which declares the country a “secular, democratic republic.” There is loud applause.

Artists made anti CAA murals and other art installations on the blockade highway during the ongoing weeks long sit-in protest led by women of Shaheen Bagh against the Citizenship Amendment Act, 2019 in Delhi, India on January 12, 2020.
Javed Sultan/Anadolu Agency via Getty Images

The protesters are fighting the Modi government’s Dec. 11 introduction of the Citizenship Amendment Act, which would provide citizenship to all non-Muslim refugees from Bangladesh, Afghanistan and Pakistan who fled to India before 2015, and a National Register that would require Indians to provide documentary evidence of residence and Indian ancestry. Shortly after the Act was passed, the police began to clamp down heavily on protesters and dissident voices, including brutal crackdowns in three universities: Aligarh Muslim University, Jamia Millia University and Jawaharlal Nehru University. Many young men and women from Shaheen Bagh study in Jamia University, just a short drive away.

The brutal crackdown on the Jamia campus brought middle-aged, conservative, Muslim women like Ara out onto the streets. And more than a month since protests in India began, the women of Shaheen Bagh are showing no sign of giving up, despite a threat of forceful eviction hanging over their heads. (Although the Delhi Police on Jan 14, said they will not forcefully evict the protesters.) “We have come out of our houses wearing a shroud on our heads, we will take a bullet and fall to blows,” Ara says. “But we will still stand here to safeguard our children’s future.”

You need women, says veteran activist Medha Patkar and lead campaigner of the Save Narmada Movement, when the fight is going to be long and hard. “The specialty of a women-led movement is that they can be sustained longer. Women don’t give up,” Patkar says. India sees these women as shields, she says. “But in fact, they are the swords.”

And India’s history shows it wouldn’t be the first time that women have helped keep the flame of protest burning.

In 1973, a group of peasant women gave the world the term “tree huggers” when they led a protest in a Himalayan village to prevent trees from being felled. (Chipko means “hugging” in Hindi.) When loggers arrived, the women stood firm for four days, surrounding the trees.

The movement spread throughout India as an organized resistance to the destruction of forests. In Uttar Pradesh, the Chipko movement managed to secure a 15-year ban in 1980 on the felling of trees in that state’s Himalayan forests.

The women of Idinthakarai fishing village in the southern Indian state of Tamil Nadu, have been protesting against the Kudankulam Nuclear Power Plant in Tirunelveli district since the 1980s, when the plant was proposed. Construction of the plant began in 2001 and the plant has been operational since 2013. In 2011, after the Fukushima nuclear plant disaster in Japan, anti-nuclear protests gathered momentum. The protests resurged last year when protesters learned that the state was planning to build an Away from Reactor (AFR) facility to store spent fuel within the plant premises.

“The women made all the difference,” SP Uday Kumar, one of the main coordinators of the People’s Movement Against Nuclear Energy, told the Caravan Magazine last year. “They carried the struggle on their shoulders.”

He adds that the women protesters were from different faiths—Christians, Hindus and Muslims who all believed in non-violent resistance. “They couldn’t be bought with alcohol or money or intimidated through coercion.”

“In difficult times, a woman’s first response is to stay and fight,” he adds. “The women owned the struggle. They carried it on their shoulder. And it’s not dead yet. Its embers are still burning under the ashes and it will erupt again some day soon. That’s the beauty of women-led movements. They never die.”

In Bhopal, a city in the central Indian state of Madhya Pradesh, mostly Muslim women took to the streets to seek justice for themselves and their families, who became victims of one of the world’s worst industrial accidents. That year, almost 40 tons of poisonous gas had accidentally leaked out from a Union Carbide pesticide plant in Bhopal, now owned by Dow Chemicals, killing around 20,000 people. Several thousands suffered health complications, and even today, children in Bhopal were born with birth defects and various other disorders.

While the Bhopal disaster has largely fallen off the radar, 35 years on, most of the women have not abandoned their fight against one of the largest multinationals in the world. “In the beginning the men came, too, but within a couple of years, the movement was being dominated by the women,” Rachna Dhingra, a member of the Bhopal Group for Information and Action, who played a defining role in mobilizing the women, tells TIME.

“Women who were in purdah came out on the streets. They are still fighting; they have kept the movement alive. They are still protesting to secure just compensation, raising awareness about the continuing effects of contamination on the children,” she adds.

In 2004, Bhopal’s Rashida Bee and Champa Devi Shukla, were awarded the Goldman Environmental Prize after they led a class action suit demanding cleanup and compensation for affected individuals. In a press release, the organization had called their leadership a “powerful validation of women’s role on the frontlines of India’s civil society.”

“Whatever little we could achieve in the last 35 years was because of their indomitable spirit,” Dhingra says.

The Narmada Bachao Andolan (Save Narmada Movement) is perhaps the longest non-violent movement in the history of the world driven primarily by women. Issues that affect habitat, livelihood or right to shelter, Patkar says, can mobilize women faster. It was launched in 1985 by Patkar, to protest against a series of large dam projects across the Narmada River that flows through three Indian states (Gujarat, Madhya Pradesh and Maharashtra) and demand just compensation for around 32,000 people who were displaced as a result of the project.

The movement managed to pressure the World Bank—one of the sponsors of the project—to withdraw funding in 1993. In 2017, India’s top court awarded 681 displaced people in Madhya Pradesh—a major beneficiary of the Narmada project—compensation of $90,000 each.

A few months after the court order, the women, led by Patkar, stood neck-deep in the cold water of the Narmada River on a chilly September morning, in what they called a “water protest,” an essential feature of the protest movement. They were in a village in Madhya Pradesh to demand justice for 40,000 families who were at risk of flood because of the Sardar Sarovar Dam, a centerpiece of the Narmada project. For five hours, they stood there, chanting slogans, singing and listening to speeches. Patkar went on a nine-day hunger strike in September last year to demand proper rehabilitation for those affected. Last November, they were back in the waters again demanding a reduction in the water level in the same dam.

Patkar shared the 1991 Swedish Right to Livelihood Award, also known as the alternative Nobel, with Indian activist Baba Amte for “their inspired opposition to the disastrous Narmada Valley dams project and their promotion of alternatives designed to benefit the poor and the environment.” 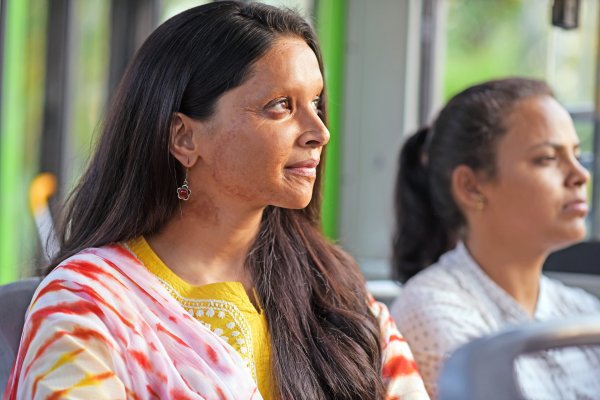 Violence Against Women Has Made a Resurgence in India. Deepika Padukone's New Film Highlights the Strength of Survivors
Next Up: Editor's Pick