What's Next for President Donald Trump? Here's What Happens in a Senate Impeachment Trial

On Wednesday, President Donald Trump became the third President in U.S. history to be impeached. The House of Representatives approved two articles of impeachment: abuse of power and obstruction of Congress. The vote was nearly entirely along party lines.

The issue now moves to the Senate, which the Constitution gives the sole responsibility of holding a trial to determine whether the President should be convicted and removed from office. But when that trial will happen is more unclear.

Here’s what to know about the Senate impeachment trial.

When does the Senate trial start?

After the House impeached the President Wednesday night, questions emerged about the timing of the upcoming Senate trial.

“We will make our decision as to when we are going to send it when we see what they are doing on the Senate side,” Pelosi told reporters. “So far, we have not seen anything that looks fair to us.”

The House broke for recess Friday night, and won’t be back in session until Jan. 7, 2020 — the trial’s date will stay up in the air at least until then.

Does Nancy Pelosi have to send the articles of impeachment to the Senate?

“I don’t know of any source of authority that requires her to send them,” said Richard Primus, a constitutional law professor at University of Michigan Law School.

Stanford Law constitutional professor Bernadette Meyler explains that the Constitution says then the Senate “shall have the sole power to try all impeachments,” not the Senate “shall try all impeachments.” She says one could make a textualist argument that the articles don’t necessarily have to be sent to the Senate. On the other hand, she points out that they always have been, so one could argue based on precedent that Pelosi must send the articles.

All that aside, observers agree Pelosi almost definitely will send the articles eventually.

When she does, Congressional rules require the House of Representatives to effectively act as the prosecutors in the case against the President, arguing before the Senate why he should be removed from office. A few members of the House will be appointed as “managers” to present the articles of impeachment to the Senate.

Pelosi has yet to name any of the managers. However, Intelligence Committee Chairman Adam Schiff’s and Judiciary Committee Chairman Jerrod Nadler’s names have both been mentioned. The pair are intimately familiar with the case against the President because they oversaw the impeachment inquiry over the past few months. Some Democrats have also mentioned Rep. Justin Amash — the recently-Republican and now-Independent Michigan congressman — as a possible manager, in an attempt to lend the proceedings a more bipartisan bent.

It’s up to the House as to how many managers they’ll appoint. The trial of President Andrew Johnson had seven managers and President Bill Clinton’s had 13.

Does the Senate have to hold a trial on the articles of impeachment?

Article I, section 2 of the U.S. Constitution says “the Senate shall have the sole Power to try all Impeachments…[but] no person shall be convicted without the Concurrence of two-thirds of the Members present.”

Some have argued that a senator could submit a motion to dismiss the charges against the President that would only need a simple majority to pass. Such a motion was introduced during the Clinton impeachment trial, and failed.

“I don’t think the Senate is likely to do that, and it’s an unresolved question if the Senate can do that,” Erwin Chemerinsky, the Dean of the University of California Berkeley School of Law, tells TIME.

“For the Senate not to hold a trial would be to subvert the structure of the Constitution,” Primus adds.

If a trial did start in January, it’s unclear how long it would last, although both parties have signaled that they hope to get it over with quickly. President Clinton’s trial in 1999 lasted five weeks.

What are the rules of the Senate trial?

AFP via Getty ImagesSenate Minority Leader Chuck Schumer watches as the US House of Representatives votes on impeaching US President Donald Trump in Washington, DC on December 18, 2019.

“All the Constitution says is that the Chief Justice of the United States will preside, and that it will take a two-thirds vote in order to remove President Trump for office,” Chemerinsky tells TIME. “Everything else in terms of procedure is ultimately left up to the Senate.”

The Senate will officially decide what their rules will be before the trial begins, and there’s no deadline as to when they need to decide. (McConnell and Democratic Minority Leader Chuck Schumer have already clashed over the topic of trial rules.) They might work off of established rules on governing impeachment trials that were most recently edited in 1986.

Supreme Court Chief Justice John Roberts would preside over the trial, but he wouldn’t operate the same way as a normal judge. His rulings could be overruled by a simple majority of the Senate. Crucially, Roberts would also act as tie-breaker if there was a 50-50 split. Usually the Vice President plays this role, but he can’t in impeachment trials due to the inherent conflict of interests.

Senators effectively act as the jury, but they have more freedom than normal jurors. Besides being able to vote on procedures and overrule Roberts, they can also submit questions and objections themselves.

Senators take an oath to issue “impartial justice,” but McConnell has argued that it’s difficult to view Senators as impartial judges on this issue when multiple lawmakers in the upper body are running for President against Trump. Some Republicans have also said they’ve made up their minds as to how they’re going to vote before the trial has started.

“Impartiality usually means that you haven’t reached a determination before a trial is held. So, to me, it seems like potentially that raises the possibility of some senators violating that oath,” Meyler says.

Roberts’ rulings on evidence will be less crucial than in a regular jury trial, Primus points out.

The President will also likely have a legal defense team representing him, like Clinton had during his impeachment. Trump told reporters on Thursday he will probably be represented by White House counsel Pat Cipollone, along with a “couple others.”

Chemerinsky points out that Johnson’s and Clinton’s impeachments trials were done in closed-door sessions, but says he thinks “there’s a great likelihood that this impeachment will be held in public.”

Does the Senate have to call witnesses?

Nope. “The important thing to remember is that no one can make the Senate do anything here,” Primus explains.

“They could rely entirely on the presentation from the House managers and those who are defending Trump,” Chemerinsky adds. “They don’t have to have witnesses if they don’t want to.”

Democrats have already requested witnesses. Last week Schumer called for testimony from additional people who did not appear before the House, such as acting Chief of Staff Mick Mulvaney and former National Security Advisor John Bolton. McConnell has rejected those requests.

The Sixth Amendment requires that the defendant be confronted with the witnesses against them, but an impeachment trial doesn’t have to follow the rules of a normal criminal trial. The requirement “hasn’t been held to be necessary in an impeachment case,” Meyler explains.

How likely is the Senate to convict Trump?

Not likely at all. Were a trial to take place, the Senate would need a two-thirds majority — or 67 senators — voting yes to remove the President.

Republicans control 53 Senate seats to the Democrats’ 47. Twenty Republicans would have to split from their party for Trump to be impeached, which is highly unlikely. Most expect Trump to be swiftly acquitted. According to the Senate Historical Office, about half of the Senate impeachment trials since 1789 have resulted in conviction and removal from office.

“The reality is, everyone knows what the outcome in the Senate is going to be,” Chemerinsky explains. “There’s not two thirds to remove President Trump. That means that this is entirely there for the political show. For each side to make its case to the American public.” 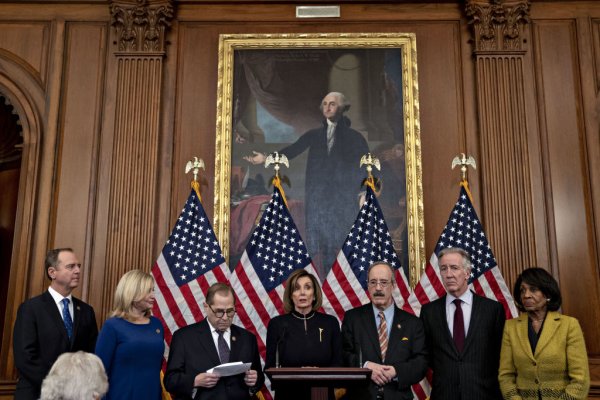