“I have asked Judiciary Committee Chairman Jerry Nadler to be prepared to bring to the Floor next week a resolution to appoint managers and transmit articles of impeachment to the Senate,” Pelosi wrote in a letter to her colleagues Friday morning.

The timing for the exact transmission is unclear, but the earliest the House could vote on the resolution codifying the move and naming the impeachment managers, the lawmakers who will argue the Democrats’ case in the Senate, is Tuesday. Nadler and Rep. Adam Schiff, who chairs the House Permanent Select Committee on Intelligence and helmed the majority of the inquiry, will almost certainly be among those selected.

Pelosi’s announcement comes approximately three weeks after the House voted to impeach the President on two counts: abuse of power for allegedly withholding hundreds of millions of dollars in aid to Ukraine in exchange for an in investigation into a top political rival, and obstructing Congress in their attempt to investigate that abuse.

While many lawmakers had expected the House would pass a resolution transmitting the articles and naming the managers immediately after the vote, Pelosi had other plans. She told reporters at a press conference following the House votes in December that she could not send the articles over until she was assured of a fair trial by Senate Majority Leader Mitch McConnell. “So far, we haven’t seen anything that looks fair to us,” she said at the time.

New information has emerged since the House impeached Trump about Mulvaney, Duffey and Blair’s roles in withholding the aid to Ukraine. An e-mail from Duffey to a Pentagon official obtained by JustSecurity described the hold as a direction from Trump. And on Monday, Bolton announced he would be willing to testify in the Senate trial pursuant to a subpoena, after refusing to do so in the House.

In the days leading up to Friday’s announcement, both Pelosi and Democratic leadership aides argued that withholding the articles had been productive. “We think progress has been made [as a result of the delay],” Pelosi told TIME on Wednesday. “There has been further discussion on documents and witnesses. The American people have an expectation that that would constitute fairness as we go forward, also in terms of the constitutional responsibility for a fair trial.”

McConnell has effectively ignored the Democrats’ demands, however, and on Tuesday, he said he thought he had the votes to move forward on a rules package for the trial similar to the one used in former President Bill Clinton’s impeachment trial, which didn’t mandate witness appearances. Under those trial rules, a vote to call witnesses is still a possibility, but would happen after both sides make their arguments over Trump’s removal from office.

Earlier this week, Pelosi had maintained she needed to see the rules before transmitting the articles. “My next move is my first move. It’s what I’ve said all along: as soon as we see the arena our members will be participating in, we will send the articles,” she told TIME in an interview. “That doesn’t mean it has to meet my standards. We just need to know what it is.”

But by Friday morning, with the Senate already absent from Washington for the weekend, McConnell still had not revealed the exact text of the rules package, and Pelosi came ahead with her announcement. “It’s about time,” McConnell told reporters Friday when asked about it.

In her letter to her colleagues, Pelosi continued to argue that McConnell was denying the public the right to hear from key witnesses because he was fearful of what they would say. “The American people have clearly expressed their view that we should have a fair trial with witnesses and documents, with more than 70 percent of the public stating that the President should allow his top aides to testify,” she told her caucus. “Clearly, Leader McConnell does not want to present witnesses and documents to Senators and the American people so they can make an independent judgment about the President’s actions.”

Republicans close to Trump touted this as a victory, since the Senate is proceeding to a trial without having met Democrats’ demands. “There is no way to spin it: Speaker Pelosi and her Democrat Caucus spent weeks playing games with what is effectively their attempt at overturning an American election,” tweeted Rep. Mark Meadows, a close Trump ally. “This display was appalling. It is deeply, fundamentally unserious. And it always has been.” 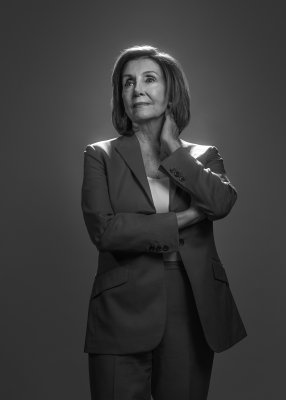 Why Pelosi Is Going All in Against Trump
Next Up: Editor's Pick