In the Senate these days, any four Republicans with an independent streak could wield more power than Senate Majority Leader Mitch McConnell if they chose to exercise it together. So far, no four have synced up to do so. But former National Security Advisor John Bolton’s offer to testify in a Senate impeachment trial is testing that delicate GOP balance of power.

McConnell controls the Senate calendar and is adept at holding his caucus together through tough stretches. But as the impeachment trial of President Donald Trump approaches, there are the faintest of warnings from a handful of his fellow Republicans that there could be splinters. The byzantine rules of the Senate allow decisions on witnesses and impeachment process to be decided by 51 votes, and Republicans hold 53 seats.

If four Republicans agree that any of the Democrats’ requests aren’t outrageous, that could spark a serious re-ordering of the trial. For instance, should four Republicans agree with Democrats that they should hear from witnesses before voting on removing Trump from office or keeping him in power, that could hand Democrats a win they’ve been chasing for the three weeks since the House voted to impeach the President.

Republicans’ refusal to commit to witnesses got a little shakier on Monday, after Bolton surprised Washington and said he would testify to the Senate if subpoenaed. Some of Bolton’s former National Security Council staffers testified during the House impeachment inquiry, describing how Trump conditioned U.S. aid to Ukraine on an investigation into Joe Biden and his family. The aides described Bolton’s awareness of events that are central to Democrats’ allegations that Trump abused his office’s power and then obstructed Congress’ investigation. Bolton could prove a damning witness against Trump, who says he has done nothing wrong.

So when Sen. Mitt Romney of Utah on Monday said “of course” he wanted to hear from Bolton, antennae went up. Romney, a frequent critic of Trump’s, stopped short, though, of saying the witness list should be secured before the trial in the Senate starts, which is what Democrats have demanded. “I don’t know what the process will be like. But time will tell,” Romney said.

It’s that non-committal positioning that keeps blood pressure cuffs on high-demand at the Capitol these days, regardless of party affiliation.

Other potential defectors, like Sen. Susan Collins of Maine, said Monday that the Senate should follow the precedent set during the 1999 trial of President Bill Clinton. During that impeachment, lawmakers heard opening arguments from House prosecutors and Clinton’s defense team before settling on witnesses. Collins said that was how she would like to move ahead, closely tracking with what McConnell said earlier in the day from the Senate floor while leaving the door open to Bolton’s testimony.

But Collins has at the same time been critical of McConnell’s coordination with the White House and his assertion that he sees no way that Trump is convicted during the Senate trial. “It is inappropriate, in my judgment, for Senators on either side of the aisle to prejudge the evidence before they have heard what is presented to us,” Collins told Maine Public Radio.

Democrats have been stepping up pressure on potential Republican votes, including Collins, Sen. Cory Gardner of Colorado, Sen. Joni Ernst of Iowa or Sen. Martha McSally of Arizona all of whom face tough challenges in November. Democrats hope the Republicans will calculate that agreeing to hear from new witnesses, like Bolton, would win over moderate and independent voters in their states, while providing them cover before voting to acquit the President, who remains highly popular with the Republican base.

Bolton isn’t exactly banging down the door: in his public statement announcing a willingness to testify, he made clear he would do so only if the Senate cobbled together 51 votes for a subpoena. Still, even the faintest of wavering from McConnell’s caucus is enough to hearten Democrats, who regardless of testimony face very long odds of actually removing Trump from power via impeachment. So far, the Democrats’ chase of a four-Republican bloc hasn’t turned up any wins. But as Schumer put it on the floor on Monday afternoon: “It is now up to four Senate Republicans.”

The question for them is this: Do any four of them link arms and leap together into Trump’s Twitter timeline as defectors? Or do they hold tightly to McConnell and trust he understands the political minefield well enough to navigate through impeachment and into re-election season? As the Senate returned after a holiday recess, luck seems to favor a unified Republican front and McConnell’s savvy. 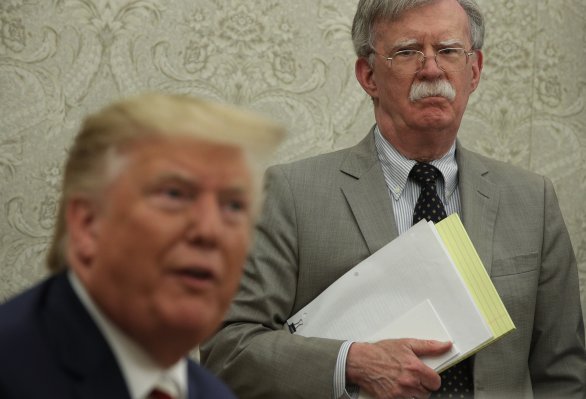 Bolton’s Offer to Give Impeachment Testimony Catches Congress, White House By Surprise
Next Up: Editor's Pick