Cultural Heritage Reminds Us of Our Shared Humanity. That's Why Threats Against Them Are So Dangerous

On Jan. 4 President Trump created an international uproar when he first suggested that Iranian cultural sites were legitimate military targets. “They’re allowed to use roadside bombs and blow up our people. And we’re not allowed to touch their cultural sites? It doesn’t work that way,” he told reporters on Air Force One the following day.

The response to those comments was surprisingly encouraging. Not only did preservationists, historians and international law experts express outrage – including the Metropolitan Museum of Art’s director and CEO calling such threats “abhorrent to the collective values of our society” — but there was significant criticism from across the political spectrum, including from some of the President’s strongest supporters. “We’re not at war with the culture of the Iranian people,” Lindsey Graham, Republican of South Carolina, said on Monday.

While Defense Secretary Mark T. Esper has given his assurances that international law will be respected and cultural sites will not be treated as military targets, and the President himself has backed off his threats, the initial threat raises deeper questions surrounding the role of culture, memory and place in conflict. Why does threatening cultural and historic sites with attack strike such a chord? What does it say about the intrinsic power of the past? And how can that power be harnessed to unify and create a strong foundation for respect across difference?

On one level, this outcry in support of protecting cultural heritage suggests that a majority of people recognize, almost intuitively, that a historic temple is never just a historic temple. Iran is home to countless incomparable sites, including 24 UNESCO World Heritage Sites, such as the ancient city of Persepolis and the Masjed-e Jāmé (“Friday Mosque”), each of which contributes to the identity of the Iranian people. To imply such sites are targets is a wider act of aggression. Indeed, throughout history, threatening to eradicate a group or a nation’s culture has almost always been about something more – namely, about eradicating people themselves. Cultural destruction has forever been part and parcel of ethnic cleansing. In 2001, when the Taliban destroyed the Bamiyan Buddhas —two 6thcentury statues, each well over 100 feet tall, carved into a cliff in central Afghanistan — the reasoning given by the militant group was that the statues “have been gods of the infidels.” The fact is that the destruction was part of a much larger campaign to eliminate the region’s Hazara ethnic minority, for which the statues were of irreplaceable religious significance.

The giant Buddhas of Bamiyan are destroyed by the Taliban government on March 12, 2001 in Bamiyan, Afghanistan. The two enormous statues, measuring 175 feet in height, were carved into sandstone cliffs at Bamiyan by Buddhist worshippers who traveled the Silk Road from China in the third century A.D.
CNN via Getty Images

The destruction of cultural sites — from libraries to places of worship to museums — is ultimately about erasing a people’s entire history. During the Bosnian war in the early 1990s, Serb and Croat forces destroyed or damaged hundreds of mosques in their efforts to rid the region of Muslims. In Zvornik, which had been a historic Muslim trading post on the Drina River, so many traces of the town’s past had been eliminated that Brano Grujic, the Serb-installed mayor there, could falsely boast in 1993 that “there were never any mosques in Zvornik.” As Helen Walasek, the author of Bosnia and the Destruction of Cultural Heritage, writes, sites such as archives and museums were targeted in part because they reflected Bosnia’s pluralistic past. Such attacks were aimed at “eradicating any trace of Bosnia-Herzegovina’s historic diversity and traditions of coexistence.”

Ironically, the dictator or despot’s antipathy toward history reminds us of the transformative power of both memory and place to connect people across generations, borders, and other potentially fractious lines. Perhaps for this reason, there is a growing global movement not only to preserve historical and cultural sites, but to reimagine those sites as places of reflection and healing. Leading the way are “Sites of Conscience” —some 275 sites across 65 countries — that include former concentration camps that spark discussions on modern xenophobia, repurposed prisons that invite dialogue on mass incarceration, and historic slave trade sites that advocate on behalf of the 40 million people who are enslaved today.

The current conversation around preservation of cultural heritage in the Middle East comes at a critical time for the region, when conflict and atrocity have put a number of marginalized cultures at risk. In Iraq, the genocide of the Yazidi people, a religious minority that were terrorized by ISIS in a systematic attack beginning in August 2014, threatened to eradicate not only Yazidis themselves but any record of them — in large part because their religion and traditions are orally transmitted. That makes initiatives to erect museums and memorials dedicated to them — something supported by many, including Nadia Murad, a Yazidi human rights activist and co-recipient of the 2018 Nobel Peace Prize — particularly urgent.

While cultural heritage is not the only way we form bonds with others, it is one of the most powerful and effective means of doing so across barriers. It is heartening to see the public outcry at this latest threat, but the risk to cultural sites during conflict remains extraordinarily high. This is especially so given the limited funding for multilateral organizations dedicated to their protection such as UNESCO, from which the United States formally withdrew a year ago. If our children and our children’s children cannot access the most fundamental aspects of our own histories and those of others, they will never be able to identify the common threads that bind us all. And it is only through this binding that we can tap into — and act on — our shared humanity. 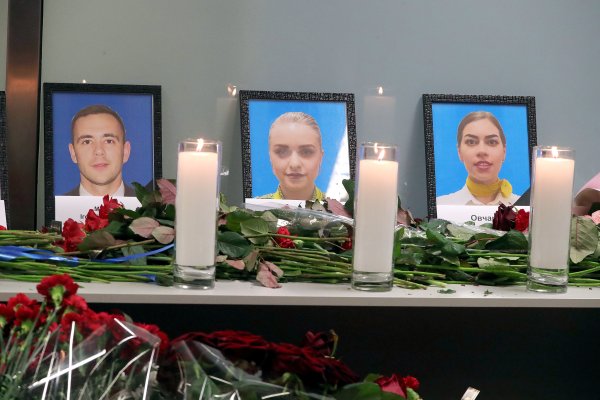 The Iran Plane Crash Could Be the Latest in a Long History of Accidental Shoot-Downs
Next Up: Editor's Pick