Slavery Still Exists All Around the World. Here's How Some Countries Are Trying to Change That

On Nov. 25, an Irish truck driver admitted plotting to assist illegal immigration and currently stands accused over the death of 39 Vietnamese migrants who were found in a refrigerated truck in October in Essex, southeastern England. Mo Robinson, 25, is also facing charges of conspiracy to commit human trafficking offences, and accusations that he is part of a larger plot to bring people into the U.K. illegally.

While the number of deaths was unusually high, cases like this are not uncommon. In November, Dutch police arrested another truck driver on suspicion of human trafficking when 16 migrants were found in a truck about to board a ferry bound for the U.K. The crime of human trafficking constitutes modern slavery; the United Nations estimates that over 40 million people are in modern slavery today, where victims can be subjected to brutal practices like forced labor, debt bondage and forced marriage.

“If you really boil it down, slavery happens because of three things. There are desperately vulnerable people who might be from a targeted group, or young, or powerless in some other way; there are violently greedy people who are prepared to make money out of other human beings; and then the third element is that these violent people think they can get away with it,” says David Westlake, CEO of International Justice Mission U.K., an organization working with victims of slavery and with law enforcement around the world to tackle the issue at its source.

The world’s eyes were on the U.K. after the October deaths of 39 Vietnamese migrants, though the country has been taking significant steps to tackle human trafficking and modern slavery. The 2019 Global Slavery Index, a country-by-country analysis of the state of modern slavery worldwide conducted by the Walk Free Foundation, placed the U.K. as the country taking the most action to respond to modern slavery. It joins France, the Netherlands and Australia as a handful of nations in the world that have introduced legislation targeting slavery in the last 10 years. But while understanding of the problem is increasing and as governments try to tackle modern slavery by targeting supply chains, there are still several shortcomings and areas where victims are left behind by the system.“It’s at the car washes and the nail bars, but we don’t hear so much about slavery in the agricultural industry or in brothels around the U.K. that operate without any governance,” says Kevin Hyland, who was the U.K.’s first anti-slavery commissioner for three years, a role created as part of the country’s 2015 Modern Slavery Act. “We’ve got an understanding, but that understanding is still niche.”

The landmark Modern Slavery Act of 2015 in the U.K. consolidated a variety of criminal offences into a single piece of legislation under the umbrella term of modern slavery. The law requires organizations conducting business in the U.K. with worldwide revenues of at least £36 million ($45 million) to produce and publish an annual slavery and trafficking statement each year. Five years earlier, California introduced similar legislation requiring companies to be transparent about what they are doing to tackle modern slavery in their supply chains. The approach is becoming more widespread: earlier this year, the Dutch Senate voted to adopt a child labor due diligence law also focused on supply chains. But some experts say there are still shortcomings in terms of compliance, as businesses in the U.K. in particular are not forced to investigate or pinpoint slavery in their supply chains and do note receive penalties. “You’re not going to find the needle of slavery in your haystack of supplies,” says Westlake. “Transparency doesn’t necessarily lead to action.”

Instead, Westlake suggests the U.K. could learn from countries like France and Australia. In February 2018, the French Parliament introduced a new law requiring businesses to identify risks to human rights and the environment in their operations. Although the law’s criteria means it applies to fewer businesses than the U.K.’s Modern Slavery Act, businesses have more specific requirements to follow when publishing their reports on the issue. The French law also allows victims and concerned parties to bring a case to a judge if a company defaults on its obligations to publish and implement its vigilance plan; fines of as much as 10 million euros can be incurred if companies are found to have failed to comply. “The French system is by far the best because it does have sanctions,” says Hyland.

Earlier this year, the Australian government introduced its own Modern Slavery Act, which similarly requires businesses to publish a statement on the risks of modern slavery in their supply chains. Statements will be available on a publicly available register published by the Australian government. In February, the Australian Institute of Criminology estimated that there were up to 1900 victims of modern slavery in 2015/16 and in 2016/2017, and that only one in five victims are actually detected. “It is still very early days, but we have seen increased awareness of and engagement around modern slavery since the introduction of the Modern Slavery Act, particularly from the business community,” says Carolyn Liaw, researcher at Anti-Slavery Australia, a legal and research center supporting victims of trafficking and slavery.

While supply chains have come into focus, advocates say still not enough is being done to help victims of slavery and trafficking. In Australia, Liaw says “limited awareness” among frontline staff and government workers of the warning signs and how to respond to modern slavery may have contributed to the estimated 80% of victims that go unidentified in the country. According to police, Australia is primarily a destination country for people trafficked from Asia, in particular Thailand, Korea, the Philippines and Malaysia

Critics say the U.K. legislation has not been implemented as well as it should have. As part of his role as anti-slavery commissioner in the U.K., Hyland traveled to Vietnam in 2015, one of the top source countries for foreign nationals who are trafficked to the Britain. Hyland says that a 2017 report he commissioned resulted in 35 recommendations for action the government should take to combat modern slavery experienced by Vietnamese nationals, but government officials responded that he had been overly critical. “I would entirely disagree,” Hyland says. “The data and intelligence material was sat there, and nobody was actually using it to identify crime routes, criminals and victims.” When Hyland resigned from his position in 2018; his letter addressed to former U.K. Prime Minister Theresa May suggested that his independence in the role “felt somewhat discretionary from the Home Office,” the government department responsible for immigration, security and law and order.

A truck in which 39 bodies were discovered in the trailer is driven from the site to a secure location where further forensic investigation can take place, on October 23, 2019 in Thurrock, England.
Leon Neal—Getty Images

A lack of support for victims

Experts say that despite the advances of the Modern Slavery Act in the U.K., child victims in particular are being left behind. The Act does not include a system of guardianship for all unaccompanied children in England and Wales, and government austerity measures have reduced access to foster care and mental health services. “It’s not entirely clear who is responsible for the child. Quite often, frontline workers have not been provided with the specialist knowledge around trafficking in order to support child victims,” says Laura Durán, senior research and policy officer at Every Child Protected Against Trafficking (ECPAT UK).

One in every four victims of modern slavery around the world are children, with women and girls disproportionately affected by forced labor. They account for 99% of victims in the commercial sex industry. For children arriving in the U.K. who may have been trafficked or victims of slavery, Durán says they face additional challenges like not being believed about their age, their background and their health history.

Even in the countries that seem to be tackling slavery the most, progress has still been ultimately relatively limited. “I think society needs to really understand how bad this is, and that it affects our whole way of life and our business,” says Hyland. “The entertainment and gratification that serves some people is built on a whole global society of human trafficking, modern slavery, and exploitation of others. That needs to change.” 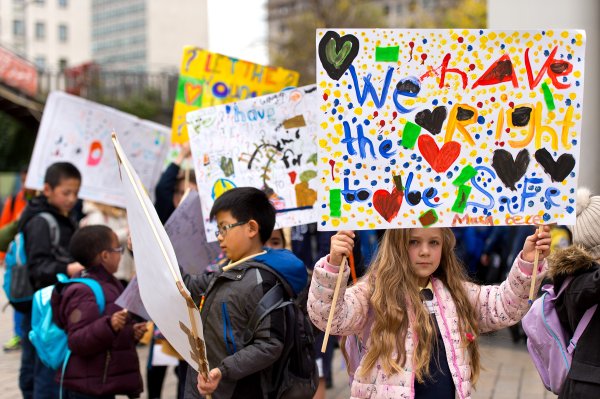 Angelina Jolie Interviews One of the Drafters of the U.N. Convention on the Rights of Children: ‘Children Need to Know Their Rights’
Next Up: Editor's Pick