India’s Supreme Court Orders a Review of Internet Shutdown in Kashmir. But For Now, It Continues

On Friday, India’s Supreme Court instructed the government of Prime Minister Narendra Modi to review the ongoing Internet shutdown in the disrupted region of Kashmir within a week, in a blow to the government. Parts of India’s only Muslim-majority state have been offline since Aug. 5, leaving some 7 million people without service.

But in a ruling that said “indefinite” suspension of Internet services would be illegal under Indian law, the court nevertheless stopped short of instructing Modi’s government to immediately restore connection.

In August, a few months after an emphatic victory in national elections for Modi’s Hindu nationalist Bharatiya Janata Party (BJP), the Indian government stripped Jammu and Kashmir of its long held semi-autonomous status. The region, which is claimed by both India and Pakistan, is the site of a decades-long conflict between separatist insurgents and the Indian army. Meanwhile, Delhi sent troops into Kashmir, imposed a curfew and cut cellphone, landline and Internet access in the Muslim-majority Kashmir valley, while largely sparing Hindu-majority Jammu. While phone services were eventually restored two months later, the Internet has remained suspended.

India shuts off the Internet more than any other country in the world, and the government has been turning to the tactic more frequently since the BJP came to power in 2014. In 2019, the Internet was blocked 106 times across the country — and 55 times in Jammu and Kashmir alone, according to the Delhi-based Software Freedom Law Centre. In December, amid widespread anti-government protests relating to a controversial new citizenship law, the central and state governments shut down Internet access in densely-populated parts of Delhi, Uttar Pradesh and West Bengal, among others, leaving 60 million people offline.

Although there were more individual instances of Internet shutdown in 2018 than 2019, last year the shutdowns lasted longer: the current shutdown in Kashmir is the longest ever recorded at 159 days and counting.

In Kashmir, where the Indian army has been accused of human rights violations and where many residents see it as an occupying force, the government insisted the Internet shutdown was a safety measure meant to make it harder for militants to plan riots or attacks in the aftermath of its decision to revoke Kashmir’s status. But 159 days on, the shutdown has hit the Kashmiri economy, strained the work of doctors in hospitals, and made it difficult for family members to contact one another. Internet shutdowns have cost the Indian economy more than $1.3bn in 2019, according to recent research.

In its ruling on Friday, India’s Supreme Court suggested exempting government websites, banking facilities, hospitals and “other essential services” from the blackout. And, in a paragraph that could hold great future significance, justices declared for the first time that Indians hold “fundamental rights” to freedom of speech and expression that extend to their use of the Internet.

The court also ruled that “repetitive use” of a government-imposed injunction in Kashmir known as Section 144, which makes public assembly of protesters illegal, would constitute an “abuse of power.” Section 144 has been repeatedly imposed in Kashmir since August, and was invoked in other areas of India in December during the recent protests. The court instructed the Indian government to review its continued use of Section 144 orders, but did not order them to be withdrawn.

Section 144, the court said in its ruling, “cannot be used to suppress legitimate expression of opinion or grievance or exercise of any democratic rights.”

But in a ruling likely to disappoint Kashmiris, in the preamble to their judgment Supreme Court justices said they did not intend to “delve into the political propriety” of instructing the government to act. “Our limited scope,” they wrote, “is to strike a balance between the liberty and security concerns so that the right to life is secured and enjoyed in the best possible manner.” 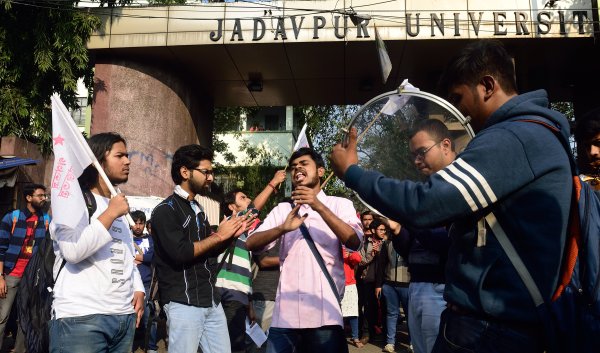 What I Saw During the Violent Attack on a Top Delhi University
Next Up: Editor's Pick