Impeachment Standoff Could Be Coming to a Close

The long standoff between Nancy Pelosi and Mitch McConnell that has held up the start of President Donald Trump’s Senate trial may be coming to an end.

Pelosi has declined to transmit the House’s articles of impeachment to the Senate in a bid to ensure that the trial rules provide for testimony from new witnesses. In an interview with TIME on Wednesday, the House Speaker said she is still waiting to see the rules, but indicated that once they are on the table she would be willing to move forward even if she didn’t agree with them.

“My next move is my first move. It’s what I’ve said all along: as soon as we see the arena our members will be participating in, we will send the articles,” she tells TIME. “That doesn’t mean it has to meet my standards. We just need to know what it is.”

Even if, as expected, Pelosi does not agree with McConnell’s stipulations, she argues the delay caused by withholding the articles was still beneficial. “We think progress has been made [as a result of the delay]. There has been further discussion on documents and witnesses. The American people have an expectation that that would constitute fairness as we go forward, also in terms of the constitutional responsibility for a fair trial,” she says. “All of this has moved us to a better place as we go forward. Now we will see what he puts on the table.”

Since the House of Representatives impeached the President on abuse of power and obstruction of Congress last month, Pelosi has argued that she could not name House members to present the case to the Senate until she was assured of a fair trial by McConnell, the Senate Republican Leader. “So far, we haven’t seen anything that looks fair to us,” she said.

Democrats have called for the trial to include testimony from four key witnesses who did not appear before the House and could shed light on Trump’s actions: former National Security Adviser John Bolton, acting White House Chief of Staff Mick Mulvaney, and White House officials Michael Duffey and Robert Blair.

In the weeks since the House vote, the Democrats’ case for more testimony has been bolstered by new reports swirling around all four officials. The New York Times reported on Mulvaney’s role in withholding aid to Ukraine, and an email obtained by JustSecurity from Duffey to a Pentagon official described the hold as a “clear direction” from Trump. On Monday, Democrats got their biggest boost yet, when Bolton, whose attorney has said was part of “many relevant meetings and conversations that have not yet been discussed” regarding the Ukraine allegations, said he would testify before the Senate if lawmakers issue a subpoena.

“Ambassador Bolton’s willingness to testify underscores Trump’s unprecedented obstruction of Congress, the second article of impeachment, and the fact that there is more evidence to uncover about Trump’s abuses of power,” said a Democratic leadership aide. “This demands a fair trial in the Senate.”

It wasn’t clear if 51 Senators – the necessary number for a subpoena – would get on board, but Senate Democratic Leader Chuck Schumer hinted this week that some Republicans had signaled to him privately that they were open to such cooperation with Democrats.

McConnell announced Tuesday he had amassed sufficient support within his conference to pass a rules package he says would be similar to the one the Senate formulated two decades ago during the impeachment trial of then-President Bill Clinton. Under those rules, decisions about witnesses and additional testimony would only come after the White House and the House prosecutors give their arguments for and against Trump’s removal from office.

“There will be no haggling with the House over Senate procedure. We will not cede our authority to try this impeachment. The House Democrats’ turn is over,” McConnell said Wednesday. “The Senate will address all these questions at the appropriate time, and that is for the Senate and the Senate only to decide, period.”

Some Democratic Senators just want the trial to start. “I’m ready, willing and able to begin a trial tomorrow,” said Sen. Richard Blumenthal of Connecticut. Delaware Sen. Chris Coons said he felt his Republican colleagues should be pushing McConnell to hear from witnesses. But, he added, “I also think it’s time for us to resolve this standoff and find a way to move forward.”

Pelosi said Wednesday she has yet to hear from McConnell. “We keep hearing rumors,” she said. “We’ll be glad when he does [make the rules public].”

It is still unclear whether McConnell would unveil the resolution before Pelosi sends articles of impeachment. But if he does, and Pelosi moves ahead with a resolution naming managers and handing the articles to the Senate, both sides may be able to claim victory. Republicans can argue they stuck together and did not cave to Democratic demands, while Democrats can maintain that they pressed the issue of forcing witness testimony and will continue to keep it on the table as the trial develops.

“There will be votes at the beginning on whether to call the four witnesses we’ve proposed and subpoena the documents we’ve identified,” Schumer said Tuesday. “America, and the eyes of history, will be watching what my Republican colleagues do.”

Write to Alana Abramson at Alana.Abramson@time.com, Philip Elliott at philip.elliott@time.com and Molly Ball at molly.ball@time.com. 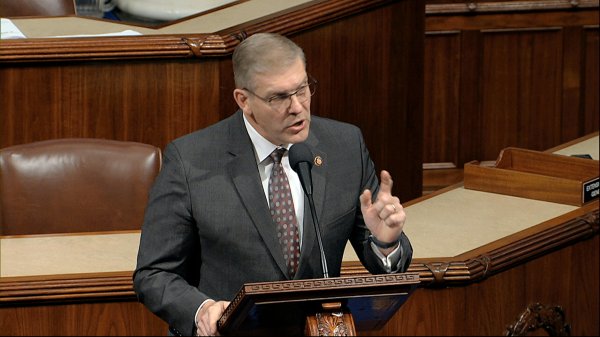 Republican Congressman Suggests Trump Is Being Treated Worse Than Jesus Amid Impeachment Debate
Next Up: Editor's Pick