66 People Have Died in Indonesia's Devastating Floods. Here's What to Know

The death toll from severe flooding in and around the Indonesian capital of Jakarta has risen to 66 as parts of the country continue to reel from heavy rain that began on New Year’s Eve. Landslides and flash floods have displaced more than 36,000 in Jakarta and the nearby provinces of West Java and Banten, according to the ASEAN Coordinating Centre for Humanitarian Assistance (AHA).

These are the worst floods Indonesia has seen since 2013, when at least 29 people died in the aftermath of torrential rains. The disaster, experts say, underscores the impacts of climate change in a country with a capital city that is sinking so quickly that officials are working to move it to another island. The floods are also threatening to exacerbate the already severe wealth inequality that plagues the Southeast Asian nation.

With more rainfall expected over the coming weeks, here’s what to know about deadly floods in Jakarta.

A rescue team evacuates residents from their flooded house at Jatibening on the outskirts of Jakarta, Indonesia, on Jan. 1, 2020.
Achmad Ibrahim—AP

How much damage has been caused?

The equivalent of 72,000 Olympic-size swimming pools came pouring down on Jakarta on New Year’s Eve, Elisa Sutanudjaja, director of the Jakarta-based Rujak Center for Urban Studies, told TIME. “That doesn’t even include the surrounding provinces.”

According to AHA, more than 1,300 homes have been heavily damaged, and 74 districts across Greater Jakarta flooded. Landslides and flash floods in the wake of the downpour affected 17,200 people across 12 villages in the Lebak district of Banten, according to local media outlet Tempo.Co. Police reported that 16 mosques were also destroyed. Drone footage showed a broken bridge in the district.

Structures damaged by floods stand along the Ciliwung River in the Mangarai district of Jakarta, Indonesia, on Jan. 4, 2020.
Dimas Ardian—Bloomberg/Getty Images

How have authorities and aid agencies responded?

The Indonesian Red Cross deployed 455 volunteers and staff to the affected areas, and is also providing first aid, health services and emotional support.

Indonesian President Joko Widodo has visited a number of the hardest-hit villages, according to BNPB. On Tuesday, he was in Bogor, located in the province of West Java, before traveling to Lebak district in Banten where 19 schools were damaged.

Last Friday, the country’s air force mobilized aircraft to seed clouds with salt, a weather modification technology that aims to break up clouds before they reach Jakarta and unleash more rain.

How does climate change fit into the conversation?

Experts say the devastating floods are a reminder that the world’s fourth-most populous country is highly vulnerable to climate change, which many blame for the severe downpours and extreme dryness that comes after a bout of heavy rain.

Certain areas of North Jakarta are sinking by 6 to 10 inches a year, according to the World Bank, and could fall up to 16 feet below sea level by 2025. Excessive extraction of groundwater for daily use is responsible for the fate of the city, which is home to 9.6 million. Indonesia announced last August that it would move its capital to the island of Borneo as overcrowding and pollution in Jakarta worsens.

Sutanudjaja, director of the Jakarta-based Urban Studies Center, criticizes the country’s leaders for inaction. “They know the crisis, but do not address it properly,” she says.

As the flood disaster threatens to persist, environmental groups are calling on leaders to face the challenge at hand and avert similar tragedies in the future.

A boy plays on a phone after the flood in Bekasi, Indonesia, on Jan. 3, 2020.
Sijori Images/Barcroft Media via Getty Images

What do the floods say about inequality in Indonesia?

The floods, which have disproportionately affected the poor in Indonesia, have ignited conversation about the nation’s income disparity. Indonesia has the sixth greatest wealth inequality in the world, according to Oxfam. Less developed districts that were badly hit by the floods in and outside Jakarta, where poorer families tend to live, lack access to infrastructure such as decent roads and electricity, the NGO reports. This makes them more susceptible when weather tragedies strike.

A photo on Twitter posted a day after the downpour had many commenting on how the floods laid the country’s inequality bare: the aerial shot shows the pristine swimming pool at Jakarta’s Shangri-la Hotel virtually untouched as the kampong—or village—just adjacent was submerged in muddy floodwaters.

Sutanudjaja says the hotel and other shiny development projects in the city are at least 3 feet higher than street level, causing floodwaters to flow down to areas that lack the infrastructure to drain it.

“The rich are able to save themselves at the expense of other neighborhoods,” she says. “In a climate crisis, they [the poor] are the first victims, and the last ones to get help.” 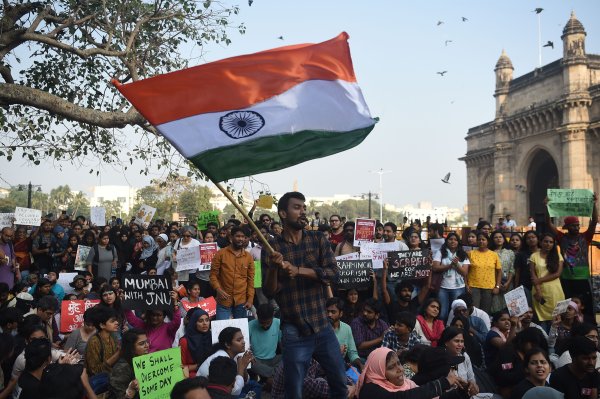 Students in India Are Protesting After Violent Attack
Next Up: Editor's Pick