Indonesia Plans to Move Its Capital to the Island of Borneo

A tug pulls a coal barge past the Islamic centre in Samarinda, Kalimantan, Indonesia on Aug. 26, 2016.
Ed Wray—Getty Images
By Arys Aditya and Tassia Sipahutar / Bloomberg

Indonesia will build a new capital city on the island of Borneo, home to some of the world’s biggest coal reserves and and orangutan habitats, as President Joko Widodo seeks to ease pressure on congested and sinking Jakarta.

The new administrative headquarters will be built between North Penajam Paser and Kutai Kartanegara in East Kalimantan, Jokowi, as the president is commonly known, told reporters in Jakarta on Monday. The relocation of the capital, some 1,400 kilometers away from Jakarta, will help spread economic activity outside the nation’s most-populous island of Java, the president has said.

Jokowi has displayed an urgency not shown by his predecessors in pressing on with the capital relocation plan, which has been periodically discussed for decades. With the greater Jakarta area, home to about 30 million people, nearing a gridlock and pollution levels reaching unhealthy levels, efforts to decongest the city have made little progress with tens of thousands of cars getting added to the roads every year.

With more than 15,000 people per square kilometer in Jakarta– twice the density of Singapore — there’s little space to build more without rehousing thousands of families. To make matters worse, two-fifths of the city is below sea level and parts of it are sinking at 20 centimeters a year.

Jakarta’s miserable traffic is a result of the city’s overwhelming importance in the nation’s economy. The metropolitan area generates almost a fifth of Indonesia’s annual gross domestic product. Gridlocks and public transport woes cost the city about 100 trillion rupiah ($7 billion) a year in economic losses, according to official estimates.

With Jokowi pitching the new capital as a symbol of Indonesian identity and progress, the project will be a significant part of his legacy. Authorities have talked about building a modern, smart and green city which can serve as the capital for a century.

The government plans to begin construction of the new city from 2021 and may start relocating some offices from 2024, according to Planning Minister Bambang Brodjonegoro. The project will be financed by the government as well as through private-public partnerships. 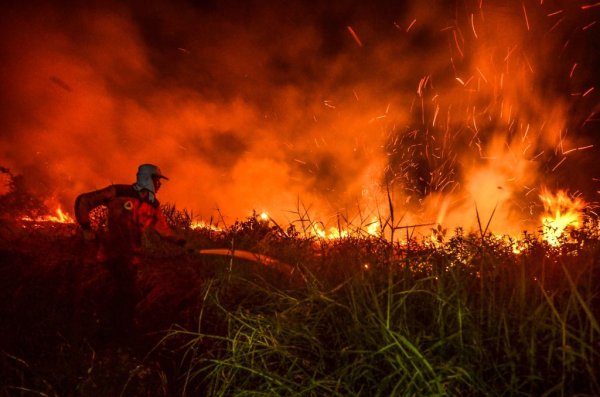 Indonesia Sends Thousands of Security Forces to Fight Fires
Next Up: Editor's Pick