With just weeks before voting begins in Iowa, the killing of top Iranian general Qasem Soleimani in a U.S. airstrike ordered by President Donald Trump has posed a new challenge to his Democratic opponents: how should the Democratic candidates react to the assassination of a terrorist whose death could draw the U.S. into another costly confrontation in the Middle East? In a race that has rarely zeroed in on foreign policy, the question has the potential to reveal fissures between Democratic rivals and possibly upend the wide-open 2020 nominating contest.

On the campaign trail, the Democratic candidates acknowledged Soleimani was responsible for bloodshed across the Middle East, including the deaths of Americans, while highlighting the potential consequences of Iranian retaliation and giving the contenders an opportunity to highlight what several said was a rushed move on the President’s part.

“[Soleimani] supported terror and sowed chaos. None of that negates the fact that this is a hugely escalatory move in an already dangerous region,” former Vice President Joe Biden said in a statement after the strike. “The Administration’s statement says that its goal is to deter future attacks by Iran, but this action almost certainly will have the opposite effect.”

Trump, Biden continued, “just tossed a stick of dynamite into a tinderbox.”

Biden’s statement was similar to those of some top Democratic rivals. Minnesota Senator Amy Klobuchar warned that the attack raised “serious questions and concerns about escalating conflicts,” while former South Bend, Ind., Mayor Pete Buttigieg said it raised questions about whether the country is “prepared for the consequences.” Klobuchar and Buttigieg also condemned the Trump Administration’s failure to consult leading lawmakers in Congress prior to the airstrike. (Senate Democratic Leader Chuck Schumer said the group of lawmakers typically briefed on intelligence matters by the White House, known as the Gang of Eight, had not been consulted beforehand.)

The top two progressive candidates in the race raised similar alarm bells about the prospect of war with Iran, but couched their criticism in stronger language. Massachusetts Senator Elizabeth Warren initially tweeted a statement calling the move “reckless,” but referring to Soleimani as a “murderer, responsible for the deaths of thousands.”

“Our priority must be to avoid another costly war with Iran,” she wrote.

On Friday, Warren sharpened her language. “Donald Trump ripped up an Iran nuclear deal that was working. He’s repeatedly escalated tensions,” she wrote on Twitter. “Now he’s assassinated a senior foreign military official. He’s been marching toward war with Iran since his first days in office—but the American people won’t stand for it.”

Warren’s rhetoric matched that of Vermont Sen. Bernie Sanders, who argued that the strike against Soleimani is analogous to the United States’ invasion of Iraq in 2002. “We face a similar crossroads fraught with danger,” he said at a town hall in Anamosa, Iowa on Friday. “Once again, we must worry about unintended consequences and the impact of unilateral decision making.” The populist Senator also noted that, should the U.S. officially enter into a war with Iran, it would be the working class who would face the most severe repercussions.

Sanders never mentioned Biden by name when discussing the strike on Soleimani at his town hall Friday. But his invocation of the Iraq War was telling. He and Biden are the only two presidential candidates who were in the Senate to vote on the Iraq war in 2002. By highlighting his own opposition to the war, he was subtly invoking Biden’s support for it at the time.

It’s a contrast that could prove pivotal as America’s confrontation with Iran unfolds. 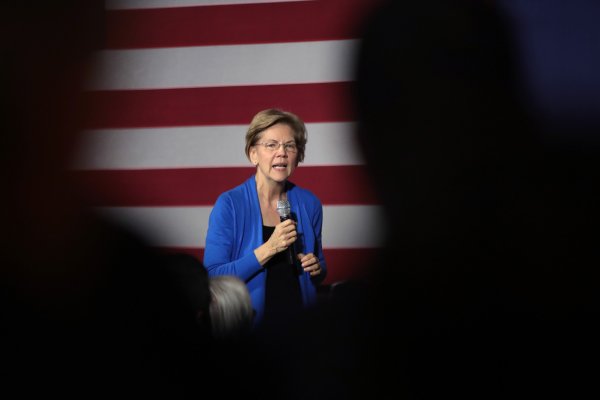 Elizabeth Warren Unveils Plan to Help People with Disabilities
Next Up: Editor's Pick