A 'Forever War' With Iran Is Unlikely. But More Death and Violence Seems Inevitable

The sudden, shocking killing of Iranian General Qasem Soleimani by a U.S. drone at the Baghdad airport is one of those moments when a big door swings violently on a seemingly small hinge. How can the death of one man, largely unknown to the U.S. public, cause such an extraordinary range of potentially dangerous outcomes? What are the options, both for Iran and the U.S. moving forward?

Suleimani was part Niccoli Machiavelli, part Cardinal Richelieu, and part battle-hardened special forces foot soldier. Revered in Tehran, he was despised throughout much of the region. The hackneyed phrase, “he had blood on his hands” doesn’t begin to describe the level of death and destruction he left in his wake across the Middle East. Taking his piece off the chessboard is a tactical success for the U.S., especially given his talent and devotion to the hardline regime. But what is missing is any sense of a strategic direction forward, either for the U.S. or Iran.

Let’s start with Iran, which has the more immediate set of choices to make. Given Soleimani’s role as leader of the Iranian military establishment and his significant political aspirations, Iran’s mullahs will be compelled to respond significantly. Their range of options within the Middle East is wide, and the most obvious one would be direct attacks against US personnel in Afghanistan (where the Iranians have deep pockets of influence in the west of the country), Iraq (doubling down on taking out the U.S. Embassy or targeting personnel), Syria or Saudi Arabia. These could be done with improvised explosive devices, surface-to-surface missiles, or direct combat missions by Iranian special forces.

The Iranians could also turn to the sea, striking U.S. warships of the 5th Fleet in the Arabian Gulf, using diesel submarines, cruise missiles, or so-called “swarm attacks” of small boats or closing the Strait of Hormuz to merchant shipping, something they have consistently threatened and signaled through much of 2019.

They can also attack US allies, unleashing their surrogate Hezbollah against Israel, perhaps using the massive surface-to-surface rocket inventory based in southern Lebanon; renewing attacks against Saudi oilfields, increasing the level of the fall 2019 strikes against oil infrastructure; or seize another tanker from the United Kingdom or other U.S. partners.

Finally, they can also choose less conventional options, perhaps a targeted assassination of a senior U.S. military diplomat or military figure in the region or closer to the U.S. itself, claiming they are responding proportionally. And almost certainly they will attempt to use offensive cyber capability to degrade U.S. military command and control, destroy or manipulate key data in the U.S. financial sector, sow chaos in our transportation infrastructure, or attack the electric grid.

Most likely, they will choose some combination of these options, all designed to give President Trump a bad set of choices – either he will have to take further military action, pushing the U.S. toward another “endless war” that he campaigned on ending; or if he doesn’t act, appearing weak in the face of Iranian action. The Iranians want some form of sanction relief before returning to re-negotiate the failed nuclear weapon accord, but that seems very far away at the moment.

On the U.S. side, the first imperative is to improve defenses across the large threat surface described above. Expect additional deployments of sensors and intelligence gathering systems; missile defense around key U.S. bases such as Al Udid in Qatar; specialized U.S Marine detachments to our embassies around the region; substantial ground troops (the first elements of the 82nd airborne division are en route to Kuwait now); more precision guided air munitions and additional fighter-bombers; perhaps another carrier strike group (an aircraft carrier with an air wing of 70 combat aircraft); and a Marine Expeditionary Unit. That set of deployments is underway now, and more will be planned.

Additionally, the Pentagon and U.S. Central Command in Tampa, Florida are working round-the-clock to build options for the President on the offensive side. While it appears the U.S. will at least pause for the moment and assess the Iranian response to Soleimani’s death, the National Security Council should be gaming out U.S. response if these is an Iranian attack. Some of the U.S. options under consideration would likely include attacks against Iranian conventional military facilities (naval and air bases); strikes on the Iranian fleet at sea; destruction of Iranian oil facilities to include refineries; the Iranian electrical grid; offensive cyber-attacks on key Iranian infrastructure; attacks on Iranian militias in the field in Syria and Iraq; or further targeted attacks against individual members of the Quds force. An important element in this drama is the way Iraq–already a highly divided society–will be crushed between the U.S. and Iran. For the Iraqis, this will represent the ultimate “no win” scenario, and it will only inflame the internal tensions.

Both Iran and the United States will generate competing strategic narratives and attempt to influence global opinion. For the U.S., this means gathering what support is possible from our European partners (which will be scarce) and more likely combining options with the Israelis and Gulf Arabs. On the Iranian side, Russia and China will be important partners at least in the diplomatic sense – particularly as the three nations just completed significant naval exercises together in the north Indian Ocean.

The chances of a climb-down appear remote at this point. The nuclear accord is irreparably broken, Iran will respond strongly to Soleimani’s killing, and likely there will be more U.S. casualties. The Trump administration will then likely escalate, and this all could tumble into a prolonged period of combat – probably not another “forever war” with a large ground troop deployment, but a series of combat encounters of increasing violence that deepen the already deadly animosity between Tehran and Washington. All of this, of course, is occurring with an impeachment as backdrop and an election year in the U.S. 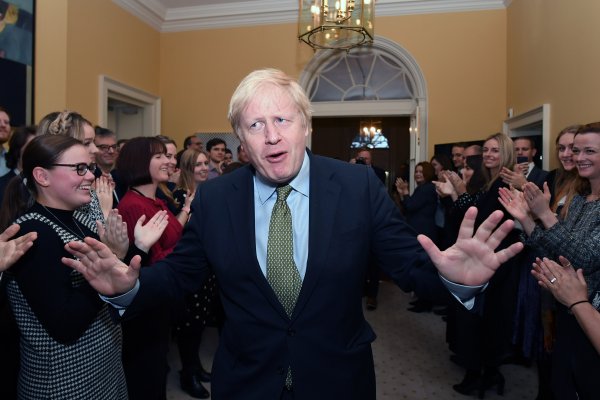 What Happens Next in the U.K. After the Election
Next Up: Editor's Pick