Rian Johnson put together a star-spangled cast for his murder mystery film Knives Out, including Daniel Craig, Jamie Lee Curtis, Lakeith Stanfield, Toni Collette and a chunky sweater-wearing Chris Evans. Yet despite their incredible on-screen performances (and the movie’s many twists and turns along the way), somehow they were all out-shined by an inanimate object — yes, that simple cable-knit.

The cream-colored pullover, which Evans’s character — the spoiled playboy Ransom Drysdale — wore in some of the film’s most-crucial scenes, has caused an online fashion frenzy, with adoring pieces devoted to its insouciantly-distressed impact showing up in The New Yorker and Elle. And while costume designer Jenny Eagan told The Hollywood Reporter that she doesn’t even remember where she got the piece (nor what has happened to it since), Evans has managed to pick up its pet-sized turtleneck twin for his dog, Dodger.

It’s a “who wore it best?” quandary with no wrong answer, really.

The actor posted photos of Dodger showing off his best angles while decked out in his holiday attire, captioning them with a Christmas tree emoji. The look in the pup’s eyes shows that he knows he could never be accused of murdering his wealthy grandfather, nor indeed even a single misdeed, because he is clearly a very good boy. 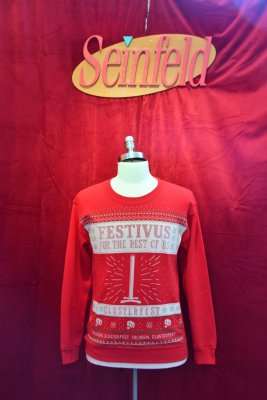 People Are Really Into Celebrating Festivus on Twitter Because There's No Better Place to Air Grievances
Next Up: Editor's Pick