Trump May Be Acquitted in a Senate Impeachment Trial. That's Not the Same as Being Exonerated

Imagine this scenario in a courtroom: The prosecutor and defense lawyer speak to the judge in advance of a trial for an attempted bank robbery. The indictment, voted on by the grand jury, recites that the defendant tried to rob the bank by demanding money from a teller and threatening her if she didn’t give it to him. But the crime was interrupted by others in the bank who saw it in progress and the defendant wasn’t able to finish the robbery.

During the investigation, the defendant was able to keep people who were around him while he was planning the robbery from talking with investigators. He denied that he had ever wanted to rob the bank. The defendant ignored subpoenas for documents that could have shed light on his thinking or proven his innocence. Fortunately, some witnesses did come forward and some documents came to light. Prosecutors obtained enough evidence to get an indictment, which requires probable cause to believe a crime was committed, despite the defendant’s efforts to obstruct their work.

Now, as they discuss the trial with the judge, the prosecution learns the usual rules won’t apply. It won’t be able to put on any evidence at trial to support the allegations against the defendant. None of the witnesses it interviewed will be permitted to testify. None of the withheld information will be available. And although newly discovered evidence suggests that the defendant may have asked some of his friends to help him carry out the robbery, it won’t be admitted, and witnesses that the prosecution has requested to testify about that won’t be permitted to testify.

Also, some of the jurors have already committed to vote for the defendant. They will still be permitted to participate and vote in the trial.

Of course, this could never happen in our criminal justice system. But apparently, it can in the Senate impeachment trial of President Donald John Trump. That’s because under the Constitution, the Senate (or at least the party that holds a majority in it) gets to make decisions about more than just the facts.

In a criminal trial, the judge, a neutral professional with no personal stake in the outcome of the trial, makes decisions about legal issues. Jurors make decisions about what facts the evidence proves. But during impeachment, Senators sit as sort of supersized jurors who not only decide the facts, but also make the rules. For instance, they get to determine what the process will be, whether witnesses can be called, which ones, what the burden of proof is and what kind of conduct by a President rises to the level of high crimes and misdemeanors so as to be impeachable. So far Senate Majority Leader McConnell hasn’t agreed to let House Democrats put on any witnesses and there’s no word on what, if any, other evidence will be permitted. Yes, the Chief Justice of the Supreme Court oversees the proceedings, but precedent in this area, most recently from the Clinton impeachment, suggests he’ll play a very limited role, more of a custodian than a judge of the law. In any event, his decisions can be overruled by a vote of 51 Senators. The Republicans hold 53 seats in the Senate.

The founding fathers anticipated potential issues that might necessitate the removal of a President – they foresaw the possibility that a President might be corrupted by foreign influence or that he might use the office to accumulate personal wealth or other personal benefit. But as House Speaker Nancy Pelosi said last week, they did not foresee a complicit Senate, unwilling to check a President who was acting in his own best interests instead of the country’s.

Allegations that the President tried to get Ukraine to announce an investigation into a political rival to benefit his own reelection chances are serious. The evidence that became public during House proceedings is compelling. But there are still many unknowns, largely because the President has refused to permit those closest to him to testify. Presumably, if they had anything helpful to say in support of the President’s case, we would have already heard from them. The White House continues to maintain the President’s innocence, claiming he never threatened to withhold aid and that the aid itself was ultimately provided.

Late Friday evening, damaging new evidence against the President was revealed. That’s when the Center for Public Integrity, a nonprofit newsroom, received documents it requested from the government under the Freedom of Information Act (FOIA). The documents were provided on the very last day allowed pursuant to a court order, late in the evening on the Friday before Christmas.

Included in those documents is an email from Michael Duffey, a Trump political appointee at the Office of Management and Budget. A mere hour and a half after President Trump got off the phone with Ukraine’s President Volodymyr Zelensky on July 25, Duffey sent an email ordering the Pentagon to withhold aid to Ukraine. The government aggressively redacted the documents it turned over, but based on this email alone, it’s clear that Duffey, who is on Senate Minority Leader Chuck Schumer’s list of four witnesses he wants called at the Senate trial, has material information and must be permitted to testify under oath and be subjected to cross-examination. OMB is already claiming that the timing was just coincidence and the decision to withhold aid was made earlier, but the purpose of a trial is to find the truth and the insistence by the White House that important witnesses like Duffey not testify signifies that they do not want the public to learn the truth.

Trump was impeached for both abuse of power and obstruction of Congress. We all understand that people who have done something wrong usually want to keep any proof from coming to light. That’s why our criminal justice system makes obstruction of justice a separate crime. People who are successful at suppressing evidence of their misconduct shouldn’t escape accountability.

If a defendant is acquitted in a proceeding against him where vital witnesses can’t testify, where relevant evidence is “unavailable,” and where some members of the jury declare their allegiance to the defendant instead of to a fair process, it’s hardly justice. Trump may be acquitted by the Senate, but if the process is fundamentally deficient, a mockery of a system designed to seek the truth, that acquittal will not exonerate him. No matter what he says, everyone will know it’s not true. 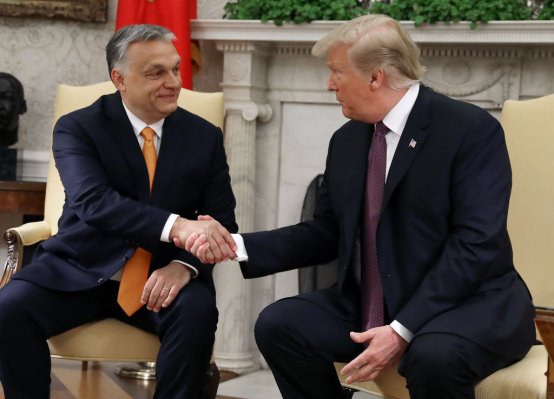 Trump's Anti-Abortion and Anti-Immigration Policies May Share a Goal
Next Up: Editor's Pick