25 Years Later, Dumb and Dumber Is More Than Just the Gold Standard for Toilet Humor

Toilet humor is probably as old as mankind. There could be a cave painting somewhere depicting one of our forebears stepping into a giant pile of dinosaur poo, but at the very least we know that Chaucer was into it in the 14th Century: In the Miller’s Tale, the mischievous scholar Nicholas lets “fly a fart as loud as if it were a thunder-clap.” If it’s good enough for Chaucer, it’s good enough for us.

You would think, then, that intelligent critics and moviegoers would have had plenty of time to prepare themselves for Dumb and Dumber, released 25 years ago this December. The reviews at the time were generally dismissive—or at least as lukewarm as a pop bottle full of pee—though in my experience, allegedly sophisticated grownups who hadn’t even seen the film were its most vocal detractors: I recall, around the time of its opening, how often its conveniently descriptive title came up in casual conversation, as evidence that Hollywood movies were truly going down the tubes.

But Dumb and Dumber—and the sibling duo who conceived and made it, Peter and Bobby Farrelly—got the last laugh when the picture became the biggest hit of that year’s Christmas season. The New York Times, in a box-office report at the time, lamented the film’s climb to the top, identifying it dismissively as “a picture aimed at 16-year-old (or far younger) boys.”

Well, yes. But maybe there’s a 16-year-old boy inside each of us. The movie’s popularity grew even further after its release on home video, and today it’s considered a cult favorite, and not just among people who were little kids when they first saw it. There’s no doubt that many of the allegedly sophisticated grown-ups who dismissed it at first eventually came around—because, to put it plainly, it’s irresistible.

Even if the appeal of toilet humor is universal, not all of it is created equal, and Dumb and Dumber may be the closest we’ve got to the gold standard—the gold-toilet standard, if you will. Lloyd (Jim Carrey) and Harry (Jeff Daniels) are best friends, roommates and sworn partners in dumbness, living in a drab apartment in Providence, R.I. (the Farrellys’ home stomping ground) and toiling away at modest jobs in the hopes of one day opening a pet store together. Harry grooms dogs—not very well—and drives them around in a van that is itself disguised as a dog. (It’s covered with shag carpeting on the outside.) Lloyd is a bumbling chauffeur, and as the movie opens, he falls in love-at-first-sight with a very pretty and obviously very rich client, Mary (Lauren Holly, a superb straightwoman). She’s headed to the airport. Lloyd, smitten, asks her where she’s going; the answer is Aspen. “Mmmm, California! Beautiful,” he responds, and proceeds to engage this sweet but rather distracted young woman in a weirdly graceful stream of idiotic small talk. Every sentence is loopier than the next—he tells her the name of his future pet store will be I Got Worms, because its specialty is going to be worm farms—yet he just keeps prattling on, supremely confident in his ability to navigate life with aplomb.

It’s a brilliant opening: Harry and Lloyd are dumb, but they don’t know that they’re dumb—their optimism, their unerring certainty that they’ve got all it takes to get ahead in the world, is both charming and grating. These are brilliantly broad performances, with deeper shadings of subtlety than you’d think. Harry, with his cap of frizzed-out, straw-colored hair, his mouth arranged in an almost perpetual frown of slack-jawed skepticism, has the hotter temper, and also seems to be the more worldly of the two, though that’s debatable. When we first meet him, he’s delivering a passel of messily groomed dogs to their uptight owner just in time for a dog show. As she rages at him, he calls her “Mrs. Loogyburger” for no discernible reason. (Her name is Mrs. Bourne.) There’s an aggressive edge to his sloppy innocence—one of the keys to the movie is that you like these characters, but they never play the pathos card. The Farrellys aren’t going for sappiness here. Lloyd and Harry’s most aggravating qualities keep coming to the fore. Sometimes they antagonize one another openly. But their friendship is hardy and true. They need one another badly; no one else would have them.

Lloyd is one of the great comic creations of Carrey’s career, which, at the time of Dumb and Dumber, was just blasting off. (He had two other hits that year, The Mask and Ace Ventura: Pet Detective.) As Lloyd, Carrey’s sleek brown hair appears to have been cut around the rim of a bowl, most likely a sly homage to the Three Stooges’ Moe Howard. (Later, we see a barber giving him a trim using a steel mixing bowl as a template—but of course.) His ingratiating, devilish grin is marked by a raffish chipped tooth. According to lore, that’s Carrey’s real tooth and not a prosthetic. As he told Entertainment Weekly at the time,“ Clark La Prairie jumped on my head in grade-school detention. The nuns sent me home with my tooth in an envelope.” Carrey simply had his dentist remove the cap that had long been hiding the jagged remnant.

Carrey’s performance style owes a debt to his idol, Jerry Lewis, and you can see that here in the precision of his movements, and in the control he maintains over every muscle, from head to toe—sometimes a gag announces itself gradually, breaking across his face like the sun rising over a mountain range. During the course of the movie—in which Lloyd and Harry set out on a road trip to Aspen, to return the briefcase Mary has left behind in Lloyd’s limo—Lloyd, seemingly so innocent, repeatedly nudges Harry to the edge of his patience. He’s also flagrant about spreading misinformation. While flipping through a tabletop jukebox at a diner, he informs his friend authoritatively that the Monkees were a huge influence on the Beatles. Earlier, when he’s trying to convince Harry to set out on that road trip, he describes Aspen with a sense of malapropian wonder: It’s “where beautiful women flock like the salmon of Capistrano.”

What a dumb joke! But it’s one you’d never see coming, and that’s what makes it so funny. In fact, the small, tossed-off gags are the ones that hold Dumb and Dumber together. Tiny, absurd and ticklish, they fly at you like little gnats. Dumb and Dumber was the Farrellys’ debut—it was co-written by the brothers and Bennett Yellin—and it’s beautifully written and made, particularly for a first film. The Farrellys clearly paid close attention to the movie’s rhythms and tone, without drying all the life out of the thing. Although they’ve come under fire for some of the choices they’ve made—they were criticized for putting Gwyneth Paltrow in a fat suit for Shallow Hal (2001), and Peter Farrelly is the director of last year’s Oscar winner Green Book, beloved by many but decried by many others for being tone-deaf about race issues—the Farrellys are genuinely open-hearted filmmakers, and Dumb and Dumber signaled that. Some of the jokes may be prankish, but there’s no cruelty in them. And the directors always show affection for their characters, making allowances for their flawed humanity.

Which brings us to the movie’s signature scene: If a diarrhea explosion isn’t a metaphor for flawed humanity, I’m not sure what is. Lloyd has become angry at Harry, because he believes Harry has been putting the moves on Mary—which he has. Lloyd wreaks revenge by secretly pouring laxative into Harry’s drink: It’s in a bottle that’s marked, with Wile-E-Coyote obviousness, Turbo Lax. Harry drinks up, then sneaks off to see Mary. By the time he gets to her house, he’s ready to explode, but he makes it to her luxuriously appointed guest bathroom just in time. He lets it all out—his face is a rainbow of relief and surprise, even as the sounds emitting from the other end constitute an ungodly aria of fwaps and toots and graaaaaaaws.

Then he learns the toilet is broken.

Toilet humor is the great leveler. Our bodily functions may sometimes be a source of humiliation, but they also unite us. As that extremely useful children’s book assures us, everyone poops. Yet as grownups, we’re not supposed to talk about any of that, at least not in polite company. Dumb and Dumber is a glorious symphony of moronic gags, a work of absurdity that’s deeply intelligent at its core—you have to be a genius to make humor this brilliantly dumb. But it also reminds us that none of us are above feeling embarrassment. The only solution is to laugh at the things we can’t help. And then open a window. 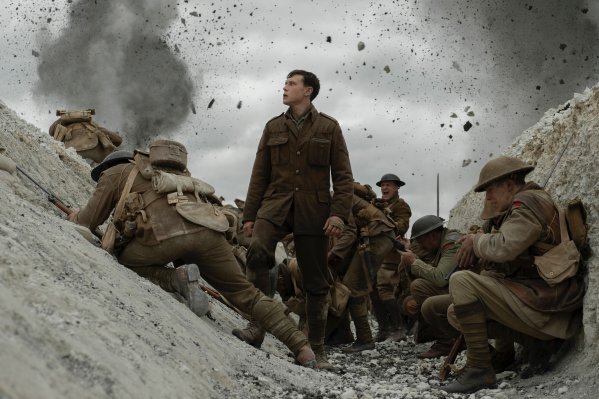 The True History Behind the Movie '1917'
Next Up: Editor's Pick