I Argued That Narendra Modi Was India's Best Hope for Economic Reform. Things Have Changed

As the U.S. gears up to test the limits of its democracy, India has been busy showing off the limitations of its own. Make no mistake: from a humanitarian perspective, what’s happening right now in India is tragic, particularly for the country’s roughly 200 million Muslims. But it’s also tragic for India’s future—both as a functioning and inclusive democracy, and as a modern and complex economy capable of delivering the kinds of services and opportunities its 1.4 billion citizens need.

For a TIME cover package ahead of India’s elections in May, I wrote this column arguing that Prime Minister Narendra Modi represented the country’s best chance at much-needed economic reforms. That would have been true…so long as Modi kept focused on the economics, as he largely did throughout his first term from 2014-2019. During those years, Modi was able to radically simplify the country’s arcane tax system and institute a comprehensible goods and services tax (albeit one that still needs to be further simplified). By modernizing the country’s bankruptcy laws, Modi helped transform India into a serious destination for foreign investment. Significant infrastructure investment in roads, airports, public transportation and sanitation improved the lives of literally hundreds of millions of people in just the span of a few years. Modi was able to channel India’s gains from globalization into actionable policy; for the first time in generations, India had a leader who seemed to transcend the country’s sclerotic and corrupt politics to tangibly improve the lives of everyday Indians. Even his policies that didn’t pan out as expected—like pulling 86% of the country’s hard currency out of circulation in an ill-fated attempt to quash the country’s black market—still underscored that India was being led by a politician with both ambition and strategic vision.

The events of the last few months have irreparably tarnished that image. Of course, there have long been troubling undercurrents to Modi’s rise as a national political figure. His time as leader of the state of Gujarat displayed—at best—a striking indifference to violence targeting the region’s Muslims. (If you haven’t read the recent piece by Dexter Filkins in the New Yorker, I highly recommend it). His Bharatiya Janata Party’s (BJP) party has long focused on Hindu nationalism as the foundation of their political movement (nearly 80 percent of the country is Hindu), but when Modi and his BJP stormed to national power in 2014—as much a result of their own brilliant campaigning as widespread disgust with the establishment figures of Indian politics—some held out hope that the responsibility of governing all of India would push Modi away from the Hindu nationalism that had animated his rise.

But then India’s economy began to slow, a product of the external global market environment, continued structural challenges on the domestic front and short-sighted government policies. Modi opted to turn to Hindu nationalism to bolster his poll numbers, a decision that helped him perform better than expected in national elections in spring 2019. And after securing reelection, Modi continued leaning his shoulder into Hindu nationalism, while neglecting issues like land reform or reducing trade barriers. As that nationalism has taken a more prominent role in government policy, it has begun directly threatening the country’s constitutionally mandated secular democracy. (Secularism in India means the equal treatment of all religions by the state.)

In August, Modi’s decision to end the special status of Jammu and Kashmir—the country’s lone majority Muslim state—and arrest regional leaders while shutting off the Internet (which recently became the longest internet shutdown in a democracy) grabbed international headlines. Then came the decision to implement a National Register of Citizens (NRC) in the state of Assam to identify any residents who arrived in India after Bangladesh’s civil war commenced in 1971. Nearly 2 million people have lost their citizenship as a result of this new register; of them, 1.2 million were found to be Hindus, which helped prompt the BJP’s efforts to push forward this week’s passage of a law providing a fast-track lane to citizenship to immigrants from neighboring countries—as long as they are not Muslims. For the Muslims who lost citizenship thanks to the NRC, the government is building detention centers to house these newly stateless people. (While the BJP has insisted illegal Muslim immigrants will be deported, Bangladesh is unlikely to accept them.)

Modi seems to figure that once he solidifies his political hold on the country with his emphasis on Hindu nationalism, he will then be able to spur the Indian economy by striking one-on-one free trade deals with countries who don’t find his methods objectionable, the U.S. chief among them. And while a mini-trade deal with a U.S. president desperate for international wins headed into an election year is possible, there’s little chance that a fully-formed free trade agreement (FTA) will be struck between the two sides given India’s well-established history of trade protectionism. Striking an FTA with Europe was always a long shot; even more so now given these recent developments. And for international investors who had been hoping for a stable investment environment, the waves of unrest caused by this nationalist turn make them even more wary of taking the plunge into India’s market.

While the economy was responsive to Modi’s moves, the Prime Minister was not so drawn to Hindu nationalism. Now that this is no longer the case, he is falling back on identity politics to capture political momentum. The problem is that while this strategy has obvious dividends for him and his BJP party, it is dooming an Indian economy that is already falling behind China’s. Investors have long-known China is repressive, but still do business with it given its size, efficiency and predictability (much of that a result of its centralized system of governance). India has the size, but nowhere near the efficiency or predictability. For the last half decade, the hope was India’s move towards openness and inclusivity would provide some of that productivity and reliability. With recent anti-Muslim developments over the last few months, that’s a much less realistic bet. India, and Modi in particular, had a window of opportunity to take the bold decisions needed to remake India’s economy competitive for the 21st century. They’re now closing that window, and India is poised to fall even further. 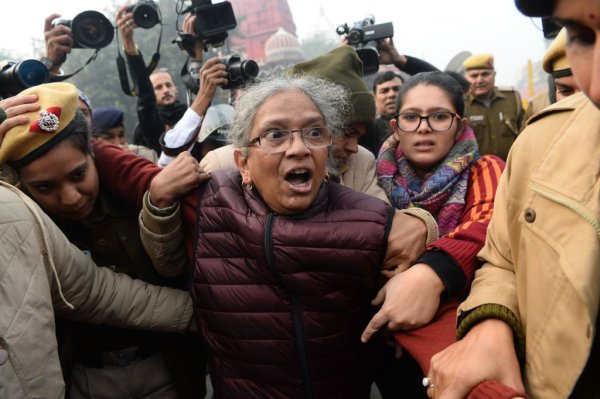 India Bans Public Protests as Part of Sweeping Effort to End Unrest Over Citizenship Law
Next Up: Editor's Pick