Christmas is just around the corner, but it can’t come soon enough for the kids around the world, and that includes Prince George of Cambridge. The little member of the British royal family is just one of many children putting together lists of what they hope—or, perhaps, expect—to see under the tree come Christmas morning.

According to his father, Prince William, Duke of Cambridge, the little future king is very excited for Christmas and has already penned his letter to Santa, listing his demands. Prince William shared the story on the BBC’s holiday special, A Berry Royal Christmas, which was hosted by former Great British Bake Off host and culinary star, Mary Berry.

“George has already written his list for Father Christmas,” the Duke of Cambridge shared on the show. While the contents of the letter are between George and Father Christmas, the little prince tends to know his mind. When he was just four year’s old, he asked for a police car for Christmas. This year for his birthday, England’s future king, according to Us Weekly, he asked for “a pair of binoculars for birdwatching and an electric kids’ car, which many of his school friends have.”

As for what Prince William and wife Kate Middleton plan to gift their six-year old son, it will most likely be related to his love for art and soccer or, as the Brits call it, football. “He loves his drawing – he’s a very good drawer,” Prince William said. “We might get him something for drawing. Or football. He is loving his football as well.” His father noted that his son is already showing a royal rebellious streak, at least when it comes to choosing which English soccer team he supports. “I said you can support anyone but Chelsea. So naturally, he supports Chelsea,” William said on the show. Hopefully that’s not enough poor behavior to make Prince George wind up on Santa’s naughty list.

His parents are working hard to set a good example of charitable behavior for their son. During the holiday special, Prince William and Catherine, Duchess of Cabmbridge visited several charities that are particularly close to the hearts of William and Kate. 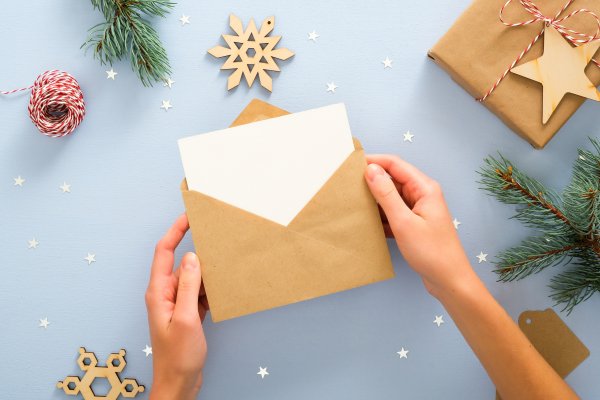 Parents Have Officially Won the Holidays With These Chaotic Christmas Cards That Got Better Each Year
Next Up: Editor's Pick