All the Questions We Still Have After the End of Watchmen

The biggest revelation in Watchmen came just two episodes before the finale: Doctor Manhattan had been hiding inside the body of Angela’s husband Cal all along. It was hard to imagine that creator Damon Lindelof could wrap up the series so quickly after re-introducing the most powerful and popular character from the original graphic novel so late in the game. But the season finale of Watchman tied up most of the loose threads in the series.

We learned why the Seventh Kavalry was collecting batteries — to create a prison for Doctor Manhattan — and why horseshoes kept popping up on Europa — so that Ozymandias could eventually dig his way out of prison and stab his captor with one. We learned that Looking Glass was undercover with the Kavalry. We discovered that Ozymandias was, indeed, Lady Trieu’s father and that it was she who saved him from space. We found out that Lady Trieu’s Millennium Clock was designed to steal Doctor Manhattan’s powers, and that Doctor Manhattan, having foreseen his demise, put his powers into an egg that Angela could later consume to become all-powerful herself.

But some mysteries still remain, namely and crucially, who is Lube Man? Lindelof isn’t currently planning a second season, so Lube Man’s identity hangs in the balance, as do these other lingering questions.

What crash landed in Tulsa?

In the episode in which Lady Trieu offers a seemingly barren couple a baby, we see something that looks like a meteorite land behind the couples’ house. We never get a clear explanation for the crash, but most likely that was Ozymandias arriving in the spaceship Lady Trieu sent to save him from Europa. Lady Trieu then turned him into a statue and displayed him in her atrium until it was time for her to confront Doctor Manhattan.

Why was the Seventh Kavalry obsessed with romaine lettuce?

The racist New York Klansman owned a grocery store filled with the greens. The modern-day Seventh Kavalry member tossed a head of lettuce into the police car of a cop that he shot in the very first episode. It’s unclear why everyone in the Kavalry seemed to sell lettuce and/or use it as a harbinger of death.

Where did the white supremacists get the technology to teleport Doctor Manhattan?

And a related question: Who is funding the Seventh Kavalry? It’s clear that Senator Keane and his father are well-off men able to fund political campaigns and the like. But it seems seriously questionable that they would be able to independently develop teleportation technology that only Ozymandias seems to have in secret.

It’s sort of odd that Doctor Manhattan and Laurie never have a moment of reconnection before he dies. After all, she was his longtime girlfriend. In fact, Senator Keane brought Laurie to that very spot to watch Doctor Manhattan die because she was so close to him.

Throughout the show, we got hints that Laurie might sense that Doctor Manhattan was inside Cal’s body. She keeps referring to Cal as hot — maybe some latent desire for her old beau — and they seem to trust each other, even when Angela is wary of Laurie. Still, once Doctor Manhattan has returned to his senses, the two never share a moment to reminisce. Instead, Doctor Manhattan spends his last moments on earth reliving his memories with his current wife, Angela.

Why did Doctor Manhattan create a planet where babies are fished out of the river?

That seems like a strange way to populate Europa, no?

Where is Nite Owl?

Dan Drieberg, a.k.a. Nite Owl, is the only living member of the original Crimebusters (Captain Metropolis, the Comedian and Rorschach are all dead) who did not appear in the HBO series. We did, however, get a glimpse of some of his tech, now apparently standard issue for Tulsa PD, including night-vision goggles that look like owl eyes and the ship that Judd flies in the first episode of the show.

We get a hint as to Dan’s whereabouts in the third episode of the show, when Senator Keane suggests to Laurie that he could get “her owl” — her old boyfriend who used to dress up as an owl, not her literal pet owl — out of prison if she helps him in Tulsa. So Dan is locked up. And now that Keane has melted away, so has his get out of jail free card. Still, it’s strange that Laurie never brings up Dan or his potential freedom in the show again.

Who was Lube Man?

We never got an explanation for a silver-jumpsuited bandit that Angela nicknamed “Lube Man.” We saw him one time, watching Angela conducting police work in her “Nut With the Gun” outfit. He escaped her by pouring lube on his body and slipping down a sidewalk grate. Based on his stature, our best guess is Agent Petey got a little too caught up in his superhero thesis work and tried to become one himself. He goes largely missing from the last few episodes of the show, so it’s possible his reveal was originally planned for the finale but simply got cut. 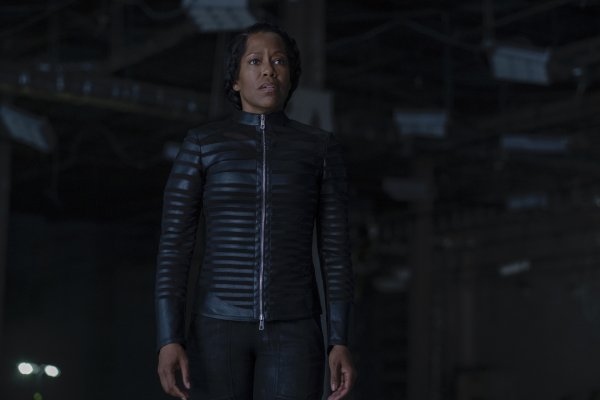 Let's Talk About Morality and Superpowers in the Ending of Watchmen
Next Up: Editor's Pick