Let's Talk About Morality and Superpowers in the Ending of Watchmen

Angela eats the egg. We should have seen it coming: After all, we first met Angela cracking an egg into the shape of the iconic Watchmen smiley face. Little did we know in the opening minutes of the first episode that eggs would show up repeatedly in the series, and that the final one, which Angela would consume, might contain god-like powers and possibly make her a deity.

Whether we’re supposed to applaud Angela’s decision to eat the egg or worry over the second coming of Doctor Manhattan is a complicated question.

Even though Watchmen is, in theory, a superhero series, only one character on creator Damon Lindelof’s show has real superpowers: Doctor Manhattan. Doctor Manhattan dies in the final episode of the show, which has become a quiet hit for HBO, but Angela divines that he has transferred his powers to an egg, based on a series of clues he gave her earlier in their relationship.

Some of those clues: The first night they met, Doctor Manhattan told Angela he could transfer his powers into organic matter while holding an egg. When the white supremacists tracked down Doctor Manhattan and Angela woke him up from her husband Cal’s body, Doctor Manhattan immediately moved to the kitchen and removed eggs from the refrigerator. He told Angela to “watch the eggs,” and she smashed them on the ground. Really, it had been a clue. Later, she goes back and realizes that one egg didn’t crack — the egg that, presumably, contains his powers.

The egg was always going to be an important symbol of life throughout the show. Angela cracks eggs in the shape of the iconic smiley face that appears on the cover of the graphic novel when demonstrating how to bake to her children and their classmates in the first episode. Later, Hooded Justice reaches into a boiling pot of water to retrieve an egg with his hand. And in the penultimate episode, Doctor Manhattan discusses the “Which came first, the chicken or the egg?” paradox with Angela, explaining that both came to be at the same time.

The series seems decidedly mixed on whether anyone should be endowed with god-like abilities. In the final episode, many characters justifiably point out that Doctor Manhattan should have used his powers to stop global warming or destroy all the nuclear weapons in the world. (Doctor Manhattan’s reasons for not doing so have to do with his ability to see all time, including the future, at once, and can be summed up as: “He doesn’t save the world from evil because in the future he won’t save the world from evil.” His path is predetermined, which is frustrating from a narrative perspective.)

And every character who seeks to steal Doctor Manhattan’s power is ultimately shown to be evil, which complicates the message of the final scene when Angela consumes the egg into which Doctor Manhattan transferred his powers and tests whether she has gained superpowers by preparing to walk on water. (Another clue from Doctor Manhattan: When the two are fighting as the white supremacists approach their house, Doctor Manhattan tells Angela that it’s important “for later” that she see him walk on water now.) Notably, we never see her actually accomplish the Jesus-like feat, suggesting that the egg could have just been a normal egg.

The series certainly seems to believe that those who crave god-like powers do not deserve them, as it punishes them for their hubris. Ozymandias, Lady Trieu and Senator Joe Keane all prove themselves to be egomaniacs who want to rule over others. Ozymandias wants to be worshipped as a god on a planet that Doctor Manhattan created. But he soon finds the place to be a hell and gets his comeuppance by being forced to spend years on a planet with no intellectual equal — and later he’s arrested by Laurie and the FBI for trying to play God during the Cold War and kill millions of people “to save humanity.”

The white supremacists are unceremoniously murdered by Lady Trieu when they try to take Doctor Manhattan’s powers. Senator Keane, specifically, is turned into bloody mush. It’s hard to feel particularly sorry for them, given their belief system and the fact that they were literally trying to leach powers from a black man’s body in order to empower a white man, a plot that played like a sci-fi twist on Get Out.

Lady Trieu, Ozymandias’ daughter, seems to have inherited his megalomaniacal gene. She brings her father back from space to witness her successfully stealing Doctor Manhattan’s powers only to be killed by his inferior technology.

By contrast, the characters who have power foisted upon them seem to do the right thing with that responsibility. Doctor Manhattan, who escaped the Holocaust, is caught up in a horrific scientific accident that imbues him with powers he uses responsibly. Yes, he allows Nixon to use him to win the Vietnam War — and set off a series of events that will lead to horrible consequences, including the death of Angela’s parents. He tells Angela he regrets these actions — again using the “I always did it” explanation as a rationale for his decision to go to Vietnam. But he also has opted out of playing America’s nuclear device since then — for better or worse. Ultimately, he works to save Angela, stop white supremacy and prevent anyone who might not be worthy of holding his power from gaining it. Hooded Justice, perhaps the most noble masked vigilante on the show, deems him “a good man” — or as good as this series may offer.

While he doesn’t gain superpowers, Hooded Justice is pushed to become a masked hero after suffering terrible injustice at the hands of white supremacists, first as a child in Tulsa and then as a cop in New York. And even Laurie, whose mother pushed her to become a masked hero and who must overcome the horrifying revelation that her father sexually assaulted her mother, is made a hero through suffering. Both characters make morally complicated decisions, from killing Judd Crawford — illegally, but again, he was an influential white supremacist — to hiding a mass murderer’s secret for several decades before finally arresting him. Ultimately, though, they make complicated decisions not as a means to seek personal reward or recognition, but to protect their communities.

The unwilling hero isn’t a new concept. In fact, it’s a core tenet of stories like Spider-Man, Lord of the Rings, Game of Thrones and Harry Potter where orphans, castaways and seemingly powerless people understand and appreciate the value of their power when it’s unexpectedly forced on them. Think of the difference between a hero constantly dragged, resisting to take on the burden of power like Jon Snow, and those who seek to conquer, like Daenerys. Contrast their fates. (Or, to quote Dumbledore, “Perhaps those who are best suited to power are those who have never sought it. Those who, like you, have leadership thrust upon them, and take up the mantle because they must, and find to their own surprise that they wear it well.”)

Watchmen certainly seems to want audiences to cheer Angela on when she eats the egg. But does Angela fit the mold of an unlikely or unwilling hero? Angela has certainly suffered. She watched as her parents were killed in a bombing. She lost her partner in the police force, and almost lost her own life, on the White Night, the coordinated attack on Tulsa cops. But arguably all the Tulsa cops sought out outsized power after that night by donning masks. They use unethical means to interrogate suspects and gain information. It’s not ambiguous how we’re meant to feel about the white supremacists whose doors they knock down. And increasingly, the show moved from morally gray territory — with cops using questionable methods — to clearer black-and-white terms: White supremacists: bad. People who try to stop them: good. The greater the threat — and the further back their terror reached in Angela’s family tree — the more justified Angela’s methods to stop them seemed to be.

But even if we deem Angela a noble character, she chooses to consume the egg. She is not caught in a freak scientific accident nor does she decide to swallow the egg’s contents in a moment of panic and bravery, like when her children are being threatened. She simply realizes the egg’s potential and seizes the moment to eat it. What she will do with Doctor Manhattan’s powers is unclear. Lindelof does not, as of yet, plan to write a second season of Watchmen, so we may have to live with that question. 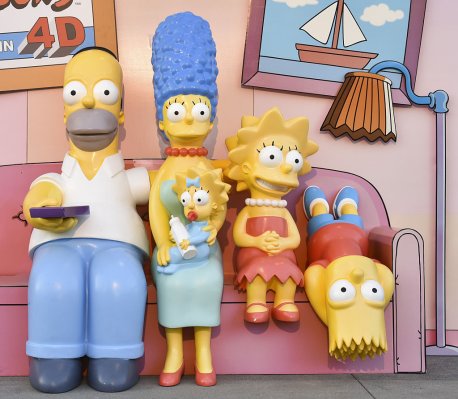 10 of the Most Memorable 'Simpsons' Episodes Ever, According to Experts
Next Up: Editor's Pick