HBO’s Watchmen is already shaping up to be one of the most mysterious, compelling and controversial shows of 2019. Showrunner Damon Lindelof (Lost, The Leftovers) has spoken at length about how he worshiped the 1987 graphic novel by Alan Moore (which originated as a 1986 series published by DC Comics). But his show is not a straight adaptation. Rather, it is a “remix” of the original material, set in the present day and dealing with modern problems, particularly the rise of white nationalism.

One could watch the show and follow the story without ever having read the book. That said, the show is a multilayered mystery. For those trying to put all the pieces together, it’s helpful to be able to parse which aspects are references to the graphic novel, and which puzzles are wholly new to the series.

Plenty of bizarre things happen in the first episode, including squid falling from the sky, the raid of a trailer park named Nixonville and an interrogation that takes place inside a pod flashing photo images at the suspect. None of these events has anything to do with the graphic novel — at least not directly. Nor do the horrifying opening scenes of the series, which depict the real-life massacre of hundreds of black business owners and residents of an area of Tulsa known as the “Black Wall Street” in June 1921.

But some aspects of the first episode — the black and white masks that the white supremacist group wears, the strange detour to visit an older gentleman in his castle and the advertisements for a show-within-a-show called American Hero Story: Minutemen, are pulled directly from the original novel and require some explanation.

Here’s everything you need to know about the Watchmen graphic novel in order to get the most out of the HBO series.

The show is not an adaptation, but a continuation

Lindelof has called HBO’s Watchmen a “remix” of the old story. The graphic novel takes place in an alternate version of 1985 New York City where costumed heroes — some with superpowers, some without — run rampant. The comic is rooted in Reagan-era social and class anxiety and depicts men and women of varying degrees of morality fighting to do what they think is right or contracting themselves out to serve the missions of others.

Lindelof’s show takes place, for the most part, in an alternate version of 2019 Tulsa, Okla., and an America in which Robert Redford is president. Everything that happened in the 1985 graphic novel is canon, and there is even a show within the show that depicts many of the events from the graphic novel. Those events have clearly impacted the American society depicted in the 2019 of the series.

Here’s the plot of the original Watchmen

Watchmen is a complicated graphic novel, and it’s difficult to summarize Moore’s efforts to interrogate and complicate the typical superhero narrative. But here goes:

The graphic novel jumps between the 1940s and the events of 1985. In the 1940s, there is a crew of masked men and women called the Minutemen who work together to stop crime — or hire themselves out for dangerous missions like fighting in the Vietnam War or helping to control race riots. Differing political and social views lead them to break up.

Fast forward to 1985, where someone is killing masked men. The first victim is a morally compromised mercenary named The Comedian. A man who calls himself Rorschach (he wears a mask that resembles the Rorschach test) investigates his death. Even though Rorschach shows himself to be a racist, sexist, homophobic maniac (who apparently also doesn’t shower), two other retired masked fighters called Nite Owl and Silk Spectre reluctantly team up with him to solve the mystery. Meanwhile, another former superhero-turned-successful businessman, Ozymandias, barely escapes an assassination attempt.

Silk Spectre’s boyfriend, Doctor Manhattan, is the only hero in the book with actual superhuman abilities. During a radiation accident he gained basically every superhero ability in the book — teleportation, creation or destruction with the snap of a finger, etc. The only downside is he’s blue and therefore not very good at hiding. Shortly after the Comedian’s death, Doctor Manhattan is publicly accused of spreading cancer with the radiation in his body. He exiles himself to Mars.

Rorschach and Nite Owl discover that Ozymandias is behind the killings of the Comedian and other masked men (he faked his own assassination attempt) as well as the Doctor Manhattan cancer rumors. The two men travel to Ozymandias’ hideout in the Arctic to confront him. Ozymandias admits to trying to eliminate the masked men in order to carry out his ultimate plan.

He explains that he is plotting to prevent nuclear war by attacking New York City using a fake squid-like alien created in his lab. He unleashes the faux alien on the city, killing three million people — who Ozymandias believes are necessary casualties to prevent millions more deaths. The U.S. and Soviet Union call a ceasefire in response and team-up to face the alleged alien invasion. The Cold War ends.

In the first episode alone, Lindelof lays out his intentions to deal with issues of race, with which the graphic novel was less concerned. The television show begins with the 1921 Tulsa Massacre, a real-life event that was not in the book.

The legacy of that assault on a flourishing black community continues to scar the community in Tulsa in 2019. Descendants of those killed in that massacre seem to have received some sort of reparations from the government — as referenced by the kid who is “on his way to being a racist” in the classroom in the first episode.

The police, meanwhile, have begun to hide their faces in response to a coordinated attack by a white supremacist group wearing Rorschach masks years before. The main character in the show is one such cop, policewoman Angela Abar (Regina King), a hero with complicated morals. While she fights against the masked men who spew racist, sexist and homophobic slurs — most of whom seem to live in an area they’ve dubbed Nixonville, after the president — she and her colleagues use questionable methods to capture and interrogate them.

The most famous image from the Watchmen graphic novel is a drop of blood that falls on the smiley face pin the Comedian is wearing when he is killed. The smiley face shows up again and again in the show, beginning with a shot of Angela breaking eggs in a smiley formation in the first episode.

Then there’s the tagline for the graphic novel, “Who watches the Watchmen?” That line immediately signaled readers that the so-called heroes of this story would be morally complicated and not always trustworthy. Similarly, the show forces us to ask who has the prerogative to decide what is right and wrong.

You also may notice clocks constantly ticking in the show. There are countless clocks hidden in the panels of the Watchmen comic, including a literal doomsday clock ticking down until midnight. The story is imbued with a sense that the characters are running out of time and that something horrid is scheduled for a specific moment. Similarly, the Watchmen TV show is filled with clocks ticking, conveying a sense of dread to the viewer. On top of all that, there are the men in Rorschach masks literally chanting “tick, tick, tick” like a bomb about to go off.

White supremacists have taken on Rorschach as a symbol

It’s no surprise that Rorschach would become a symbol for bigots in America, much like the white hoods worn by the Ku Klux Klan. (After all, the KKK uniform is another form of the vigilante’s mask.) Rorschach lived by what he believed to be an unassailable black-and-white code of conduct, but that code was colored by his own misogyny (born from a complicated relationship with his mother, who was a prostitute) and personal prejudices.

While he seems to be a Batman-like hero at first, it’s slowly revealed that he spouts homophobic and sexist slurs, murders dogs for the crimes of their owners and enjoys committing violent acts. To embrace Rorschach as a hero — as many people, including Senator Ted Cruz, have done — is sort of to miss the entire point of Watchmen. The graphic novel confronts the reader’s heroic conceptions of superheroes with the harsh and ugly reality of crimefighting.

But Rorschach did not exist as a critique of superheroes in the world of Watchmen. He was a real person, who sometimes did the right thing for the wrong reasons. He’s a complicated symbol and an aspirational figure for a vicious army of racists who adopt all the worst aspects of his ideology and channel them toward acts of pure evil.

Ozymandias is living in a castle with strange servants

While Rorschach may only live on in memory, Ozymandias lives on in reality. Adrian Veidt, the businessman who plotted the faux alien attack on New York City, is declared dead, according to a newspaper headline in the first episode of the show.

Yet he seems to be alive and well, having decamped to some old castle and acquired himself servants who look human, but certainly don’t act human. (For example, one of his servants hands him a horseshoe to cut a cake rather than a knife, like he’s been misprogrammed.) The circumstances of his living situation remain a mystery for now.

His fake alien plot seems to have persisted, though: Characters in the show reference an extraterrestrial attack, and some even believe it was a government hoax, which isn’t all that far from the truth.

We learn in the early episodes that the characters in the Watchmen TV series believe Doctor Manhattan to still be alive, but living on Mars. In trailers for the show, we see masks that look like Doctor Manhattan. It’s unclear whether or not he will return to Earth.

Silk Spectre shows up in the trailer

Laurie Blake, the former Silk Spectre, shows up as some sort of investigator or authority figure in the trailer, asking what the difference between a cop with a mask on and a vigilante is. She seems to have gone into mainstream crimefighting work after the events of the Watchmen graphic novel.

The show-within-a-show recounts the now fabled deeds of the morally complicated Minutemen from the 1940s, in all their gory horror. It heavily features a hero from the graphic novel called Hooded Justice, who wears a noose around his neck, a particularly potent costume in the context of the 1920s lynchings that set the stage for the show.

It’s clear that the events of the graphic novel serve as history, inspiration and entertainment for the characters in the television series. 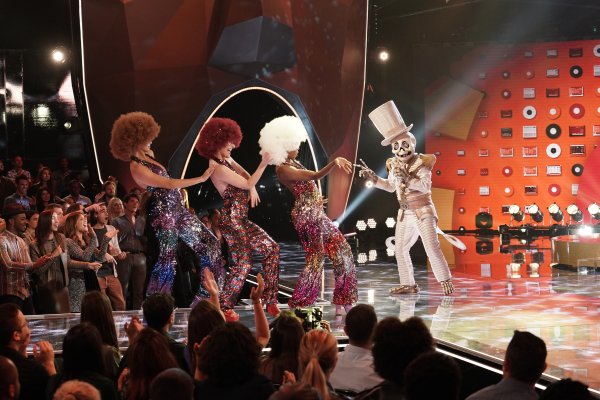 Flamingos, Eggs, and Trees: Who's Competing on The Masked Singer Season 2, What Are They Wearing, and What Is Even Happening?
Next Up: Editor's Pick