'This Thing Will Come to the Senate and It Will Die Quickly.' GOP Leaders Moving to Reject House Democrats' Impeachment Case

The House of Representatives has yet to impeach President Trump and send articles of impeachment to the Senate, but two of the highest ranking Republican Senators have already made it clear that they’ve decided not to remove the President from office.

In a pair of interviews this weekend, South Carolina Sen. Lindsey Graham, Chair of the Senate Committee on the Judiciary, declared that he feels it’s important for the impeachment trial to be over quickly if it reaches the Senate.

Graham told CNN International’s Becky Anderson on Saturday that he won’t “pretend to be a fair juror” during a trial in the Senate, saying that he’s made up his mind. While the White House has pushed for a forceful defense with testimony, Graham said that he doesn’t want to permit live witnesses — so that the trial will be over quickly.

“This thing will come to the Senate and it will die quickly. And I will do everything I can to make it die quickly,” Graham told CNN.

On Sunday, Graham reiterated that he wants to “get this thing over with” in an appearance on CBS’s Face the Nation.

“I’m not trying to hide the fact that I have disdain for the accusations in the process. So I don’t need any witnesses,” Graham said.

“Everything I do during this, I’m coordinating with the White House counsel,” McConnell said on Fox News. “There will be no difference between the president’s position and our position as to how to handle this, to the extent that we can.”

After McConnell’s comments, some Democratic legislators raised concerns about how a Senate trial could be conducted fairly if Republicans are working with the White House. Rep. Val Demings of Florida, a member of the House Judiciary Committee, even went so far as to demand that McConnell recuse himself from the trial.

“Senator McConnell has promised to sabotage that trial and he must recuse himself. No court in the country would allow a member of the jury to also serve as the accused’s defense attorney,” Demings said in a statement. “The moment Senator McConnell takes the oath of impartiality required by the Constitution, he will be in violation of that oath. He has effectively promised to let President Trump manage his own impeachment trial. The Senator must withdraw.”

Rep. Pramila Jayapal of Washington, also a House Judiciary Committee member, called McConnell’s comments “disrespectful to the Constitution,” and said his intentions would render any trial “a sham.”

Sen. Sherrod Brown also criticized the effort to end the trial quickly, telling CNN, “For the leader of the United States Senate… to say he’s coordinating with the White House to make sure he’s not convicted and removed is — I just — it really is part of this ‘see no evil, hear no evil,'” Brown said.

Sen. Dick Durbin of Illinois said that the Senate is also on trial during an impeachment trial in an appearance on Face the Nation Sunday, noting that the process is a “constitutional responsibility.”

“You know, what it boils down to is [that] we may interfere with some tee times here, but we ought to really stand up for the demeanor, the history, and the traditions of the Senate in terms of doing this in the proper way,” Durbin said.

The White House, meanwhile, has indicated that it would be happy to work with Republican Senators.

Pam Bondi, a special adviser to President Trump and a member of his impeachment defense team, said that the White House plans to work “hand and hand” with GOP Senators on Fox News on Sunday. 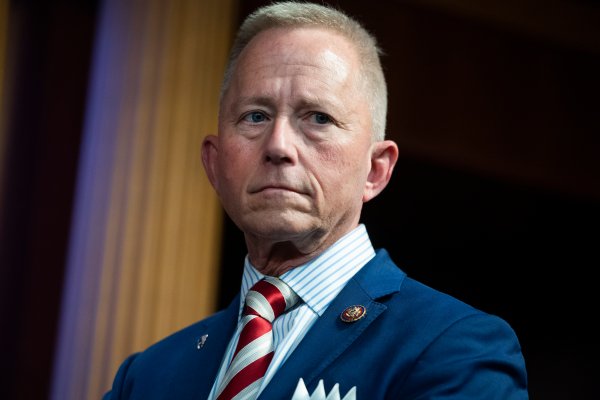 Dem. Congressman to Switch Parties as Impeachment Looms
Next Up: Editor's Pick