A male runner who slapped a female reporter’s backside in the middle of her live broadcast was arrested Friday and charged with sexual battery, according to records from Georgia’s Chatham County Sheriff’s office.

Thomas Callaway, who turned himself in, was later released on a $1,300 bond, according to the reporter’s employer, WSAV.

Alex Bozarjian was reporting live on the Enmarket Savannah Bridge Run in Savannah, Ga., on Dec. 7 when a runner in a blue shirt passed her and slapped her backside — prompting Bozarjian to pause and look shocked at the encounter. Video of the encounter quickly viral, and has been viewed more than 12 million times on Twitter.

Bozarjian later addressed the incident on Twitter, writing that “To the man who smacked my butt on live TV this morning: You violated, objectified, and embarrassed me. No woman should EVER have to put up with this at work or anywhere!! Do better.”

“Tommy deeply regrets the situation, and we hope to resolve this matter in the near future,” Callaway’s lawyer, Joseph Turner, tells TIME. “We were notified of the arrest warrant on Friday and Tommy immediately turned himself in to local authorities.”

Prior to his arrest Callaway, 43, apologized to Bozarjian in an interview with WSAV, saying “I’m thankful for this opportunity to share my apology to her and to her family, her friends and her co-workers. It was an awful act and an awful mistake.”

Bozarjian has since become represented by famed feminist lawyer Gloria Allred, and Bozarjian tweeted out a statement from Allred on Saturday.

“Alex Bozarjian is glad that law enforcement is taking this matter seriously,” Allred said in the statement. “She feels that a reporter should be able to do her job without being assaulted. Alex wants to thank the members of the public who have reached out to her to offer support. If this case goes to trial, she will be a witness. For that reason, she will have no further comment until the case concludes, but she does hope that there will be a just result.”

WSAV also defended Bozarjian in a statement. “The conduct displayed by one man toward Alex Bozarjian during her live coverage of Saturday’s Savannah Bridge Run was reprehensible and completely unacceptable. No one should ever be disrespected in this manner. The safety and protection of our employees is WSAV-TV’s highest priority. WSAV continues to support Alex completely as this case moves forward.”

After the video went viral, Bozarjian went on CBS This Morning Tuesday to speak about her experience, adding that this type of behavior might have been socialized as normal a decade ago, but is unacceptable today.

Callaway also told WSAV he didn’t mean to smack Bozarjian’s backside, but instead meant to raise his arm to wave his hand and accidentally hit her as he ran past. “Yes, I touched her, I did not know where I touched her, because I just kept running,” he said. He added that he had seen her face and reaction he would have immediately come back and apologized.

“I am not that person that people are portraying me as,” he also said. “I make mistakes, I’m not perfect and I’m asking for forgiveness and to accept my apology.” 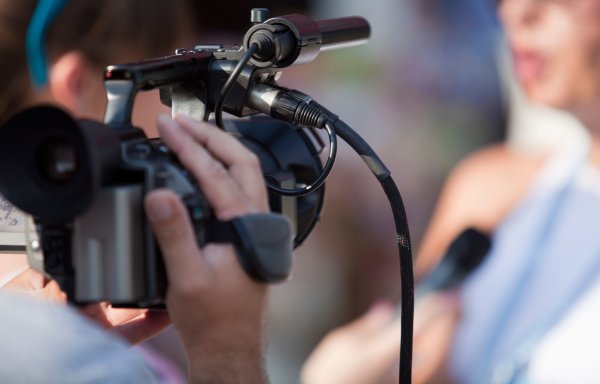 Reporter Calls Out Runner Who Groped Her on TV
Next Up: Editor's Pick