Just 24 hours before the U.S. House moved to approve articles of impeachment against President Trump, his daughter and Senior Advisor Ivanka Trump claimed a win for the White House.

“We want the United States to be the best place in the world to live, to work, and to raise a family,” she announced triumphantly to a small crowd of Administration staffers, Members of Congress, and families at the White House’s inaugural “Summit on Child Care and Paid Parental Leave” on Thursday morning.

The day before, Congress had reached an agreement to provide 12 weeks of paid parental leave to the government’s 2.1 million federal employees. The $3.3 billion provision, embedded in the National Defense Authorization Act (NDAA), passed the House on Wednesday and is anticipated to pass in the Senate next week.

Congressional Democrats, who have long pushed for paid parental leave provisions, struck a deal with the White House earlier this year: Democrats gave Trump his proposed Space Force in exchange for including federal employee paid leave in the NDAA.

Ivanka Trump, President Trump, and the 2020 Trump campaign all touted the provision as a personal win for the embattled President. It “was only made possible by” President and Ivanka Trump, the campaign said in a press release. “Wow! All of our priorities have made it into the final NDAA,” Trump tweeted Wednesday, including a reference to paid leave.

Ivanka Trump, who has made national paid parental leave one of her chief priorities in the Administration, also appeared to take personal credit for the new parental protections. “After three years of relentless advocacy, Congress agreed to finally offer paid parental leave to all federal employees. It’s amazing,” she said. “As the country’s largest employer, we must lead by example.”

Democrats, who had pushed for a much broader paid leave program that would have included adults taking time off to care for the elderly or sick, were circumspect about the progress. The NDAA paid leave provision, while poised to extend new benefits to federal workers, will exclude millions of state and municipal employees as well as the 88% of private sector employees whose companies don’t provide the benefit.

Democratic Rep. Chrissy Houlahan, who was not at the summit but worked on the House version of NDAA, called the NDAA inclusion “a really, really critical first step” towards a national paid leave policy.

Whitney Pesek, the legislative director at Paid Leave U.S., also described the NDAA inclusion as a good start. “We look forward to the Administration and Congress building on this momentum for a comprehensive policy solution for the 113 million people who still have no paid family and medical leave,” she told TIME over email.

Sen. Kirsten Gillibrand, who has been pushing for a national paid leave policy since 2013, was more critical. In an opinion piece published Thursday on CNN, she called the White House summit a “photo op” designed to “push plans that don’t even come close to being adequate.”

Vicki Shabo, New America’s senior fellow on paid leave policy and strategy, said the new NDAA inclusion was not going nearly far enough. “When voters are asked, and working people are asked how they would most benefit from a national paid leave law, it’s the caregiving and the personal medical leave pieces that people are more likely to say,” she said, noting that most FMLA usage is for personal medical leave. “We have to address the needs that caregivers have to be able to take leave from work without sacrificing their income or losing their job.”

The lack of a national paid leave mandate is unique to the United States, the only industrialized nation on the planet that doesn’t guarantee paid parental leave through a federal law. Mothers in Bulgaria get 59 weeks; mothers in Chile get a minimum of 18 weeks; and new moms in Iraq get 14. In the U.S., one in four moms return to work within two weeks of giving a birth, with many citing financial necessity.

Ivanka Trump helped launch the White House Summit in an effort to address this gap. The summit on Thursday included panels of business leaders who support paid leave and lawmakers who have introduced bills to assemble a national policy. Sens. Marco Rubio, Mitt Romney and Joni Ernst, who all attended the summit, have introduced proposals in the last year that would give new parents the option to delay or reduce their eventual Social Security benefits in exchange for one to three months off when they first have or adopt a child.

“Flexibility is key in any plan that goes forward, not necessarily mandates, we certainly don’t need additional government mandates,” Ernst said while speaking on a panel at the summit. “It should be allowed for mothers and fathers to take that opportunity to spend time at home with their new newborn child or newly adopted child, and of course, for the American taxpayer [it should be] as budget neutral as possible.”

Some Democrats argue those proposals are unfair. Speaking to TIME in the Spring, Gillibrand said, “I don’t think it’s fair that you have to choose between your retirement and paid leave.”

In 2013, Gillibrand and Democratic Rep. Rosa DeLauro first introduced the FAMILY Act — a bill that would ensure new parents and caregivers who have to provide care to older children or ailing loved ones get up to 12 weeks off with 66% wage replacement. It would be funded through a 0.2% payroll tax on both employers and employees.

Their version would enable parents like Staci Lowry to have taken time off when her 4-year-old daughter Bailee suffered a serious stroke. Instead, when Lowry exhausted all of her unpaid time off afforded to her under the 1993 Family and Medical Leave Act, her customer service position was terminated. “They fired me while I was still in the hospital with her,” she told TIME earlier this year. For now, none of the Republican plans include adults who need to take time off to care for sick loved ones.

Still, the advancement of paid leave as a serious policy consideration is undeniable as more Republicans start to join the cause. “If you did this two years ago, there wouldn’t be one Republican sitting up here today. Today, There’s six,” Sen. Rubio said of the panel he spoke on, though it was comprised only of Republican Senators.

At the conclusion of the summit, President Trump took the stage to declare that American families are “thriving like never before.” He went on: “I have to say, other nations are not doing well. Other parts of the world are not doing well at all.”

In her introductory speech Thursday, Ivanka Trump acknowledged her chief of staff, Julie Radford, who was in the audience and delivered a baby only four weeks ago. “Julie, I’ve been fighting for this for you and for so many others for a long time,” Trump said, then joked: “We’re going to have to make it retroactive.”

-With reporting by Alana Abramson from Washington 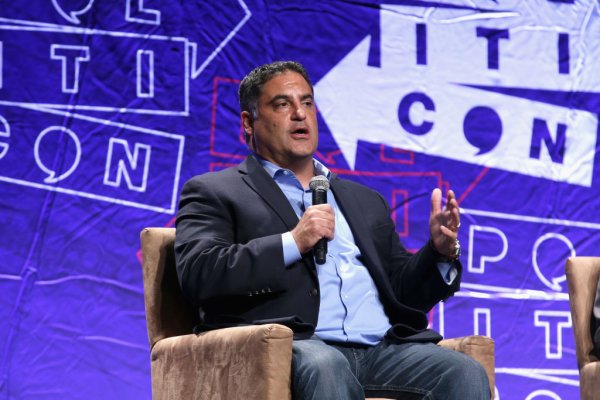 Why Bernie Sanders Walked Back His Endorsement of Cenk Uygur
Next Up: Editor's Pick