The True Story Behind the Movie Richard Jewell

That self-justified sense of virtue isn’t just the driving motive of the Richard Jewell’s action; it’s an attitude that suffuses the filmmaking project itself. The movie unfurls a stark morality tale about what happens when the powers that be—law enforcement, the media, the entire world, it seems—gang up on a couple of lionhearted little guys.

But that’s not the only view of what happened. Leading up to Richard Jewell’s release, controversy has erupted over perspectives seemingly deprioritized in the film’s telling, especially in its portrayal of real-life journalist Kathy Scruggs (Olivia Wilde) as a man-eating, less-than-ethical scoop artist. For those looking to separate fact from creative license, here’s the true story behind Richard Jewell.

Based on a 1997 Vanity Fair article by Marie Brenner, Richard Jewell’s broad narrative cleaves closely to reality. Jewell, a former sheriff’s deputy and later a campus police officer, was working security at the 1996 Olympics in Atlanta when he came across a suspicious backpack near his post at a light and sound tower at Centennial Olympic Park. There was an ongoing concert, but suspecting the worst, Jewell and police began clearing the immediate area around the bag. The progress was slow. “The young, jolly revelers, many waving cups of beer, didn’t take directions very well,” reported the 1996 TIME cover story on the bombing. Within minutes, the bag’s contents, a pipe bomb loaded with nails, exploded, killing one person and injuring more than 100 others.

Without Jewell’s watchful eye, the tragedy could have been many times worse. After the bombing, the security guard had a moment in the spotlight, appearing on CNN and landing a Today Show interview with Katie Couric. Apparently he was also approached for a book contract. But that moment of fame was about to turn sour, as law enforcement and the media began searching for a likely suspect, and settled on the rent-a-cop who had been first to spot the bomb.

“Profile of the lone bomber”

Shortly after the bombing, Jewell was labeled the principal suspect in the FBI’s investigation. According to Brenner, a tip-off came from one of Jewell’s former employers, Piedmont College president Ray Cleere, who had had disagreements over campus policing with Jewell. Cleere suggested that Jewell himself might have been the bomber, planting and then “finding” the explosive in a clumsy plot to achieve law-enforcement stardom.

Within days, the Atlanta Journal-Constitution reporters Kathy Scruggs and Ron Martz published the scoop: Jewell, the heroic security guard, was the focus of a federal investigation. As the paper wrote: “Richard Jewell, 33, a former law enforcement officer, fits the profile of the lone bomber.” CNN quickly broadcast the story, and other news organizations followed suit. Soon, Jewell was a reviled national laughingstock. Reporters were camped outside the apartment where Jewell was living with his mother. The FBI had him under 24-hour surveillance. On television, Jay Leno labeled him the “Una-doofus.”

Through those trials, Jewell benefited from an unconventional partnership with his lawyer Watson Bryant, as depicted in the film. According to Brenner, the two had met 10 years earlier, when Jewell worked in the mailroom at Bryant’s office. Bryant wasn’t exactly a hot-shot defense lawyer—at the time, he was practicing real-estate law. But enraged by what he saw as the unfair treatment of Jewell, he took up his friend’s defense with ferocious intensity.

When the FBI finally cleared Jewell after three months of investigation, he and Bryant went on the offensive, suing NBC, CNN, the New York Post. All three cases were settled out of court. The Atlanta Journal-Constitution, which had originally reported the story, fought back against Jewell’s suit. That case was eventually dismissed by the Georgia Court of Appeals in 2011, after the bench concluded that the paper’s reporting had been “substantially true” when it went to print.

In real life, it took many more years and a good deal more police work to bring the real bomber to justice. The culprit, Eric Robert Rudolph, wasn’t captured until 2003, after evading the FBI for five years and perpetrating three other bombings. In an 11-page confession released in 2005, he claimed to be motivated by hatred of gay rights, abortion and the federal government.

No character in Richard Jewell more thoroughly embodies the film’s view of an amoral, mercenary media than Kathy Scruggs, the cackling, trash-talking crime reporter who breaks the story on the FBI’s Jewell probe after (as the movie strongly implies) offering a liaison with Hamm’s Agent Shaw.

That version of events has garnered controversy leading up to the film’s release, especially from Scruggs’ former employer, the Atlanta Journal-Constitution. In a December 9 letter to the filmmaker, lawyers for the Journal-Constitution wrote that Richard Jewell’s depiction of Scruggs, who died in 2001 at 42, “makes it appear that the AJC sexually exploited its staff and/or that it facilitated or condoned offering sexual gratification to sources in exchange for stories.” That implication, they wrote, “is entirely false and malicious, and it is extremely defamatory and damaging.” They asked that the film include a prominent disclaimer saying that it took dramatic license in portraying some of its events and characters.

“Clint Eastwood portrays journalists in a way that plays to a lot of misconceptions about how professional reporters work,” Kevin Riley, editor of the AJC, told TIME earlier this week.

Warner Bros., the studio behind the movie, responded, calling the paper’s claims “baseless” and defending the film, which they say was “based on a wide range of highly credible source material,” according to a statement obtained by Variety. Actor Olivia Wilde also defended her character in the same publication. “I think it’s a shame that she has been reduced to one inferred moment in the film,” she told a Variety reporter during a red-carpet interview. “She was also a woman working in the news in 1996; yeah, she had relationships with people she worked with. That’s pretty common in any industry.”

Wilde later elaborated on Twitter, saying that she has “deep respect for the essential work of” journalists, and that she understood her character and Hamm’s to be “in a pre-existing romantic relationship, not a transactional exchange of sex for information.” She added: “I do not believe sex-positivity and professionalism are mutually exclusive. Kathy Scruggs was a modern, independent woman whose personal life should not detract from her accomplishments.” 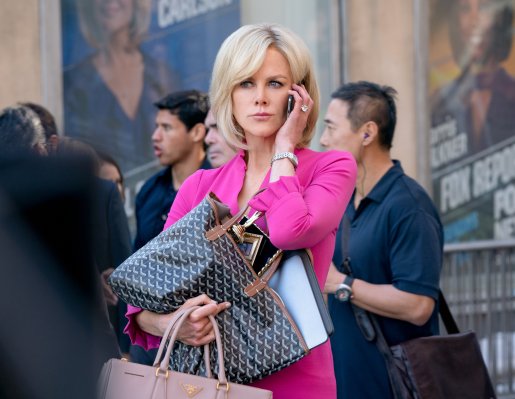 Bombshell Is a Story of Bravery That Might Leave You Cold
Next Up: Editor's Pick