It began when TIME’s editors needed to pick the Man of the Year — as the franchise was then called — for 1950. Which individual had the most influence, for better or worse, on the year’s events? For the first time since 1927, when the inaugural Man of the Year was chosen, there was no answer.

Instead, “the Man of the Year was best expressed in a symbol: the American Fighting-man,” the magazine’s publisher noted in the issue.

And once the mold was broken, the idea of a single “Man of the Year” grew to take on new meanings. (Before 1950, one couple had been chosen — 1937’s General & Mme. Chiang Kai-shek — but never a larger group.) Soon, another symbol was chosen to hold the title, inspired by that 1950 choice. At the end of 1956, a year of revolution in Hungary, one reader perfectly captured the editors’ views in a letter to the magazine: “I thought of the sacrifices the men and women and children of Hungary were making for freedom. They were a symbol, I thought. And then I remembered that TIME had picked the G.I. in Korea as a symbol, and I knew they must pick a Hungarian now.”

Other groups followed, some composed of specific people and some symbolic. For example, 1960’s pick was a group of 15 scientists. On the other hand, for 1966 the editors chose “Americans under 25,” with the explanation that “occasionally no one person seems to dominate current history as much as the embodiment of a group,” and in 1969 they selected “Mr. and Mrs. Middle America.” In 1975, the group was both symbolic and literal: a dozen women who “accomplished much in their own right” that year and “also symbolized the new consciousness of women generally.”

It was no coincidence that the period around the 1960s saw a wave of symbolic selections. In times of great change, the most influential person of the year can seem, as the magazine’s editors put it in explaining their 1969 choice, to transcend a specific individual. In those moments, world events can feel dictated not by a single speaker but by a swelling chorus.

So perhaps it should be no surprise that TIME has made more symbolic choices for Person of the Year in recent decades. For 2002, it was the whistleblowers. The next year, the first group choice was reprised, as the American soldier held the title. For 2005, there were Good Samaritans, a trend personified by Bill and Melinda Gates and Bono. For 2006, it was “You”—a single person, in some senses, but also the most all-encompassing choice so far. In 2011, it was “the protester” and in 2014 “the Ebola fighters.”

Not every Person of the Year has wielded positive influence; perhaps most notably, 1938’s Man of the Year was Adolf Hitler, with the added ominous prediction that he “may make 1939 a year to be remembered.” The first multi-person choice was 1937’s — Gen. and Mme. Chiang Kai-shek were “Man & Wife of the Year” — and the first symbolic group was 1950’s choice of “the American Fighting-man.” The first inanimate object chosen was 1982’s Machine of the Year, the personal computer. And of course, You were Person of the Year in 2006. In 2018, TIME’s editors picked the Guardians—Jamal Khashoggi, the Capital Gazette of Annapolis, Md., Maria Ressa, Wa Lone and Kyaw Soe Oo. 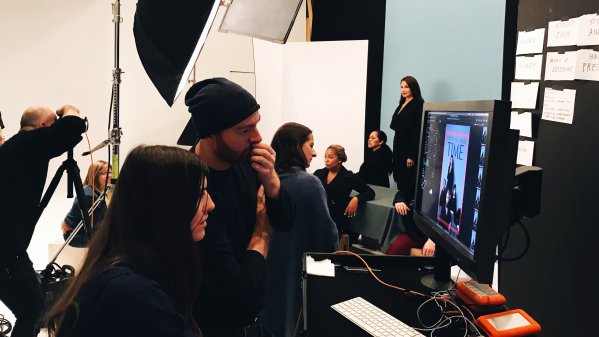 Behind the Powerful Portraits of 'Silence Breakers' in TIME's Person of the Year Issue
Next Up: Editor's Pick