Haley was speaking about the 2015 mass shooting at a church in Charleston, S.C., in which Roof murdered nine Black churchgoers in in the name of white supremacy. Photographs emerged of Roof posing with the Confederate flag. In the aftermath of the shooting, Haley pushed to remove the Confederate flag from the South Carolina state house grounds, where it had been since the 1960s.

A clip of Haley’s comment went viral, as many on social media argued Haley was not fully acknowledging the flag’s Civil War and segregationists origins.

“South Carolina fell to our knees when this happened. This is one of the oldest African-American churches. These 12 people were amazing people. They loved their church. They loved their family. They loved their community,” Haley said. “And here is this guy that comes out with this manifesto holding the Confederate flag and just hijacked everything that people thought of.”

“We don’t have hateful people in South Carolina. There’s always the small minority that’s always going to be there. But people saw it as service and sacrifice and heritage. But once he did that, there was no way to overcome it,” she continued.

Haley also spoke about how she felt the national media tried to connect the massacre to questions around racism, gun control and the death penalty. “And I really pushed off the national media and said there will be a time and place where we talk about this is but it is not now, we’re going to get through the funerals we’re going to respect them, and we will have that conversation,” she said.

“We had a really tough few weeks of debate, but we didn’t have riots. We had vigils,” Haley said. “We didn’t have protests. We had hugs. And the people of South Carolina stepped up and showed the world what it looks like to show grace and strength in the eyes of tragedy.”

A tweet of Haley’s comments went viral, although the text of the tweet didn’t mention that Haley was speaking to other’s perceptions of the flag, not her own.

The Confederate battle flag was originally flown in the Civil War as American Southern states attempted to secede from the U.S. Once the Confederacy was defeated, the flag did not reemerge in the South for several decades. It grew more popular in the 20th century, amid white Southern resistance to the the growing Civil Rights Movement and federally mandated desegregation. South Carolina Senator Strom Thurmond’s segregationist Dixicrat movement flew the Confederate flag, arguing it represented Southern history.

The Confederate flag’s placement at the South Carolina Capitol was confirmed by the state legislature in 1962. It was first raised the year before as part of an official commemoration of the 100th anniversary of the Civil War, but, as TIME reported back in 2015, historians say the emergence of the flag likely was meant “to symbolize Southern defiance in the face of a burgeoning Civil Rights Movement.”

Regardless, many pushed back against Haley’s characterization of what the flag has embodied for Americans. Other people on Twitter questioned which South Carolinian’s Haley was referring to when she said they saw the flag as heritage. The state is 27% African American, according to the U.S. Census Bureau.

Haley responded to the criticism on Twitter later on Friday, writing, “2015 was a painful time for our state. The pain was and is still real.”

“For many people in our state, the flag stands for traditions that are noble,” she said at the time. “Traditions of history, of heritage, and of ancestry. The hate filled murderer who massacred our brothers and sisters in Charleston has a sick and twisted view of the flag.”

When announcing the decision to remove the flag from the Statehouse grounds in 2015, Haley also said, “I think the more important part is it should have never been there… these grounds are a place that everybody should feel a part of. What I realized now more than ever is people were driving by and felt hurt and pain. No one should feel pain.” 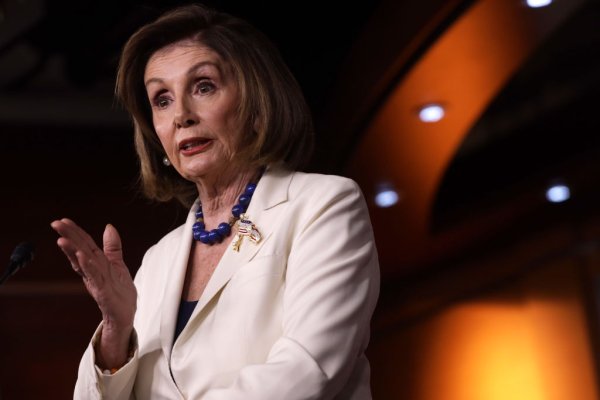 'I Pray for the President All the Time.' Nancy Pelosi Had an Angry Response When Asked If She Hates Trump
Next Up: Editor's Pick