The confederate flag flies over the State capitol building in Columbia, S.C., on Feb. 18, 2000.
Mark Wilson—Getty Images
By Justin Worland

On Monday afternoon, South Carolina Governor Nikki Haley became the latest person to urge the South Carolina legislature to remove the Confederate battle flag from the state’s Capitol. In the wake of a shooting that left nine black churchgoers dead, national debate over the controversial symbol has been reinvigorated. Below is a brief guide to South Carolina’s recent history with the potent emblem.

South Carolina has not always flown the flag. The state’s first modern hoisting of the standard came in 1961, as part of official commemorations of the centennial anniversary of the beginning of the Civil War. As K. Michael Prince notes in his book about the relationship between the state and the flag, Rally ’round the Flag, Boys!, the celebrations kicked off in Charleston, where the fighting had begun 100 years earlier. The flag’s place at the Capitol was officially confirmed by the state legislature the following year.

Still many historians say the appearance of the flag likely had a more nefarious purpose: to symbolize Southern defiance in the face of a burgeoning Civil Rights Movement. The move was, TIME later noted, “a states’-rights rebuff to desegregation.”

“The Confederate flag symbolizes more than the civil war and the slavery era,” wrote James Forman Jr. a professor at Yale Law School, in a law journal article about the flag’s history at state capitols. “The flag has been adopted knowingly and consciously by government officials seeking to assert their commitment to black subordination.”

The decision in South Carolina didn’t attract much attention at the time. Civil-rights activists were more concerned with securing voting rights and ending legal segregation than a flag, and the state legislature relied on a concurrent resolution, which is typically reserved for uncontroversial measures, to order the flag placed atop the statehouse. Because concurrent resolutions don’t require much debate, there’s little record of what arguments were used in favor of flying the flag.

But there was also little question about the segregationist views of some South Carolina political leaders at the time. South Carolina Senator Strom Thurmond famously launched a 24-hour filibuster of the Civil Rights Act in 1957. And the state’s governor, Donald Stuart Russell, fought to keep African Americans out of state universities.

Indeed, the 100-year commemoration of the Battle of Fort Sumter, the first battle of the Civil War, quickly turned into a struggle over contemporary race issues rather than a celebration of history. A hotel refused to allow black attendees, prompting President John F. Kennedy to move the event to an integrated navy base. But the change in venue did little to stifle the brewing conflict over racial equality. Speaking at the celebration, State Senator John D. Long reminded the crowd that hanging the Confederate flag in the state house, which he supported, was about more than regional heritage. According to the remembrances of Daniel Hollis, who participated in the planning of the state’s Civil War anniversary celebration, Long said that Reconstruction had been “more insidious than war and equally evil in consequences, until the prostrate South staggered to her knees assisted by the original Ku Klux Klan and the Red Shirts who redeemed the South and restored her to her own.”

The battle over the flag flared again nearly four decades later. In 2000, following a lengthy fight between the state and the NAACP, lawmakers reached a compromise to move the flag from the Capitol dome to a monument for Confederate soldiers on the statehouse grounds, and to replace the large flag with a smaller battle standard.

If Monday is any indication, it may soon disappear from the grounds entirely. 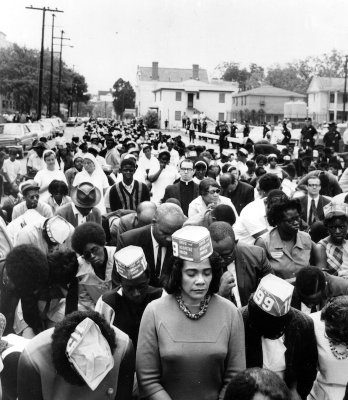 Charleston’s Place in the Civil Rights Movement
Next Up: Editor's Pick