Three people were killed and multiple were wounded in a mass shooting Friday morning at Naval Air Station Pensacola in Florida.

A total of eight people were taken to local hospitals, where one person succumbed to their wounds and died, law enforcement officials told reporters at a press conference Friday. Two officers who responded to the shooting were among those injured.

The suspected gunman was a Saudi military member who was going through aviation training at the Navy base, Florida Gov. Ron DeSantis said Friday. The gunman died in the shooting, said Escambia County Sheriff David Morgan, adding that a county officer “negated the threat” after responding to the scene.

President Trump said he spoke with Saudi King Salman in a tweet Friday afternoon. The king said he was “angered by the barbaric actions of the shooter,” Trump said.

This is the second shooting at a U.S. Navy installation on American soil in three days. On Wednesday, a Navy sailor opened fire at Pearl Harbor Naval Shipyard, killing two people and wounding one before taking his own life.

Here’s what to know about the shooting at Naval Air Station Pensacola.

One shooting victim died after being transported to the hospital, according to officials. Two other victims were killed at the scene of the shooting. The Baptist Hospital in Pensacola said it received eight patients.

Two officers were taken to the hospital after sustaining injuries from confronting the shooter, Sheriff David Morgan told reporters. One was undergoing surgery after being shot in the knee, while the other was recovering from a shot to the arm.
Eleven people total, including the gunman, who is now dead, were affected in the shooting, officials said.

Morgan said walking through the crime scene felt as though he was on the set of a movie.

“This strikes home particularly hard for me as a retired military member,” he told reporters. “You don’t expect this to happen at home.”

The suspect was a member of the Saudi military, according to DeSantis.

The Associated Press, citing a U.S. official, reports the gunman was identified as Mohammed Saeed Alshamrani. He was a second lieutenant in the Saudi Air Force, according to the AP.

The suspected shooter was in aviation training the Pensacola base. Authorities are investigating whether the shooting was a terror attack.

Students from around the world attend NAS Pensacola, which trains people from across every military branch, the U.S. Coast Guard and foreign allies, according to the Navy.
Trump tweeted on Friday that he’d spoken with Saudi Arabian King Salman, who expressed condolences for the shooting.

What we know about the shooting

NAS Pensacola’s security and local law enforcement were notified of an active shooter on the Navy base at 6:45 a.m. Friday, Morgan said.

The gunman opened fire in a classroom building on the base. The exact building was not specified.

NAS Pensacola remained closed as of late Friday morning. Officials warned people to stay away from the base area.

What is Naval Air Station Pensacola?

Naval Air Station Pensacola, established around 1825, is one of the Navy’s main hubs for training Naval and Marine Corps. aviators and is also home to the Blue Angels, the Navy’s flight demonstration squadron. Overall, NAS Pensacola is one of the Navy’s largest training centers, with about 60,000 students who graduate each year from training programs, according to its website.

“It’s something we’ve been doing for quite a while. The cross-training that we do with our allies is something that we’ve done for a long time,” he said. “There’s always been international students training here.”

How politicians are responding

“All these brave warriors who wear the wings, they come through here for flight training. This is a very dark day for a very great place,” he said.

A White House spokesperson said President Donald Trump had been briefed on the shooting and was monitoring the situation. Vice President Mike Pence said in a tweet that he was “saddened to hear of the horrible shooting.”

Florida Rep. Matt Gaetz tweeted that he was closely monitoring the shooting.

Florida Sens. Marco Rubio and Rick Scott said they were keeping in close contact with officials to monitor the shooting and offer any assistance needed. 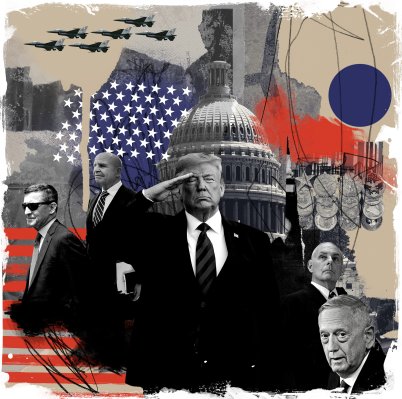 The Generals Tried to Keep Trump in Check. What Happens to Foreign Policy Now That They've Left?
Next Up: Editor's Pick