Two of the three shooting victims died, while the third is in the hospital, an official told reporters at a press conference.

“We have confirmed that two are deceased, one is in stable condition in a local hospital,” Rear Admiral Robb Chadwick, commander for the Navy in Hawaii, said according to Hawaii Now News.

It was not clear if the shooter, who was assigned to the USS Columbia, targeted the victims, or attacked shipyard workers at random, Chadwick added.

The Associated Press identified the shooter as 22-year-old G. Romero based on a tip from a military official who spoke anonymously. The U.S. Navy did not respond to TIME’s request for confirmation.

Authorities have not yet released the victims’ names, citing the need to inform next of kin. No motive or identifying information about the shooter has been released.

Following reports of an active shooting, Joint Base Pearl Harbor-Hickam was temporarily placed on lockdown around 2:30 p.m. Wednesday, three days before the 78th anniversary of the Japanese attack. Announcements and text messages reportedly called for personnel to shelter in place before the base reopened by 4 p.m.

“As a precaution the gates were secured, but they have now been opened,” Jim Neuman from Navy Region Hawaii Public Affairs told TIME.

The Honolulu base, which hosts both the Navy and Air Force, is the headquarters for the U.S. Pacific Fleet.

Hawaii’s Governor David Ige said in a statement that the White House has offered assistance from federal agencies. He also expressed “heartbreak over this tragedy and concern for those affected by the shooting.”

Queen’s Medical Center spokesperson Cedric Yamanaka said the hospital was treating one victim, reports the Associated Press. He did not confirm the patient’s condition.

Witnesses told Hawaii News Now that the sound of loud pops suddenly interrupted an otherwise uneventful workday. One service member said he was in the middle of a haircut when he received the active shooter alert by text message.

On Saturday, the Navy and the National Park Service will hold a commemorative event to mark the 78th anniversary of the 1941 surprise attack on the base by Japanese forces. WWII Veterans, family members and local officials will attend the ceremony. More than 2,300 Americans were killed in the ambush, which prompted the U.S. to declare war on Japan.

The shipyard where the shooting occurred is about 2 miles away from the Pearl Harbor National Memorial site. 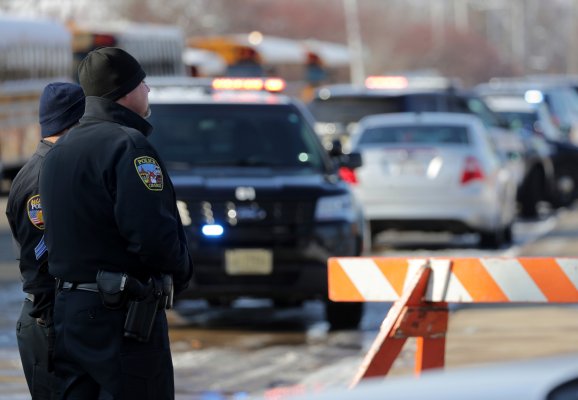 Officer Wounds Armed Student at Oshkosh High School — the Second Police Shooting in a Wisconsin School in 2 Days
Next Up: Editor's Pick