President Donald Trump said on Monday that a U.S. bill supporting human rights in Hong Kong would not make trade war negotiations easier, but he believes that China still wants to agree to a deal with the U.S.

The new legislation “doesn’t make it better, but we’ll see what happens,” he said, according to Reuters.

Trump was referring to the Hong Kong Human Rights and Democracy Act, which he signed into law last week as anti-government protests in the Asian financial hub entered their sixth month.

The move comes as world’s two largest economies try to agree on the first phase of a trade deal.

Trump’s comments come in the wake of reports that China has banned U.S. Navy visits to Hong Kong and will impose sanctions on several U.S. NGOs in retaliation for the passage of the law, which will require the State Department to annually assess whether Hong Kong retains sufficient political autonomy to justify favorable trading terms with Washington.

If the territory does not pass the yearly certification, it could lose its special trade status and find its exports subject to the same tariffs that the U.S. imposes on Chinese goods.

China warned that further retaliatory measures may be possible for U.S. action related to unrest in Hong Kong, a former British colony which was returned to Chinese control in 1997.

“We urge the U.S. to correct the mistakes and stop interfering in our internal affairs,” Chinese Foreign Ministry spokeswoman Hua Chunying said at a press conference in Beijing, according to Reuters. “China will take further steps if necessary to uphold Hong Kong’s stability and prosperity and China’s sovereignty.”

The NGOs targeted by Beijing — which has blamed the Hong Kong protests on foreign interference — are the National Endowment for Democracy, the National Democratic Institute for International Affairs, the International Republican Institute, Human Rights Watch and Freedom House.

“They shoulder some responsibility for the chaos in Hong Kong and they should be sanctioned and pay the price,” Hua said, according to Reuters.

U.S. naval ships have a long history of stopping in Hong Kong, but Beijing has denied several requests for U.S. ships to use the port since protests broke out in June.

Hong Kong protesters have overtly solicited help from foreign powers during their months-long campaign for greater political autonomy. Protesters have taken out ads in western newspapers asking for international support, and foreign flags, including those of the U.S., and photos of Trump, have been a common sight at demonstrations across the city over the past few months.

The day after the Hong Kong Human Rights and Democracy Act was passed, protesters held a rally to thank Washington for its support. 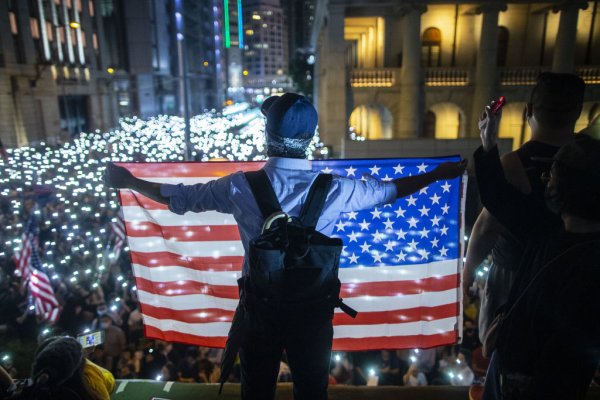