President Donald Trump has acknowledged that Mike Pompeo talked to him about leaving he Trump Administration to run for Senate, but said the Secretary of State told him he’d “rather stay” in Washington.

TIME reported on Tuesday that Pompeo has recently told three prominent Republicans that he plans to resign and run for Senate in Kansas in 2020. Pompeo had originally planned to stay in the Administration until early spring of 2020, but his involvement with the House impeachment inquiry has damaged his relationship with President Trump and hurt him politically. Sources told TIME that Pompeo is now trying and leave the Administration in the smoothest way possible.

But in an interview Friday morning on Fox & Friends, Trump appeared to give Pompeo a green light to run. “Mike would win easily in Kansas, great state, and it’s a Trump state,” he continued. “He loves what he’s doing… [but] he came to me and said look, ‘I’d rather stay where I am,’ but he loves Kansas, he loves the people of Kansas. If he thought there was a chance of losing that seat, I think he would do that. And he would win in a landslide.”

Trump said Pompeo assured him he’d rather stay in his job as Secretary of State and would only run if necessary. Pompeo’s aides have previous denied to TIME that he was planning a run, and declined to comment for the story on Tuesday. “Secretary Pompeo is only focused on executing President Trump’s foreign policy goals and completing the mission for the American people at the State Department. Anyone who says otherwise is just wrong,” a person close with the Secretary told TIME for the story.

Although originally from California, Pompeo made his money in Witchita, Kans., and represented Kansas in the House of Representatives between 2011 and 2017. He’s been in the Administration since first days Trump took office, previously serving as Trump’s CIA Director. 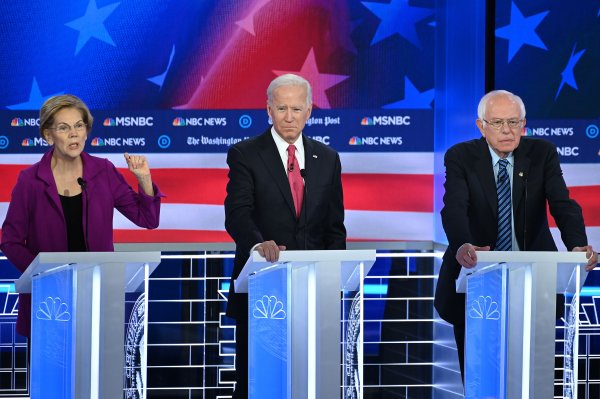 10 Takeaways From Wednesday's Debate
Next Up: Editor's Pick