As hazardous smoke from raging bushfires blanket Sydney’s landmarks on Thursday, the Australian Prime Minister refused to admit a direct link between the fires and the country’s carbon emissions, which are among the highest per capita in the world.

Health officials have issued warnings over “hazardous” air pollution levels as Sydney’s Opera House was shrouded with smoke. The smoke around Sydney and the north-coast is set to settle and remain in the area for the rest of Thursday, fire officials said. Members of the public, especially those with respiratory health issues, are advised to avoid all outdoor physical activities.

Fires have devastated large areas of the country since Oct. 20. New South Wales has seen the most severe and dangerous fires, with six people killed and around 1.7 million hectares burned. Climate Change has played a key role in the bushfires, Australia’s Bureau of Meteorology has said. They said: “Climate change is influencing the frequency and severity of dangerous bushfire conditions in Australia and other regions of the world.”

A fire rages in Bobin, 350km north of Sydney on Nov. 9, as firefighters try to contain dozens of out-of-control blazes that are raging in the state of New South Wales.
Peter Parks—AFP/Getty Images

However, amid the bushfire crisis, Scott Morrison, Australia’s Prime Minister has argued that there is no direct link between Australia’s greenhouse gas emissions and the severity of the fires burning across the country. He told ABC AU during a radio interview on Thursday that there was no “credible scientific evidence” that cutting carbon emissions could reduce the severity of the fires.

At first, Morrison acknowledged the contribution of climate change has had on the bushfires in Australia.

But, he then argued that the actions of Australia are not impacting the bushfires.

“The suggestion that in any way shape or form that Australia, accountable for 1.3% of the world’s emissions, that the individual actions of Australia are impacting directly on specific fire events, whether it’s here or anywhere else in the world, that doesn’t bear up to credible scientific evidence either.

“Climate change is a global phenomenon and we’re doing our bit as part of the response to climate change — we’re taking action on climate change,” he added. “But I think to suggest that at just 1.3% of global emissions, that Australia doing something more or less would change the fire outcome this season — I don’t think that stands up to any credible scientific evidence at all.”

Australia only accounts for 1.3% of global emissions when calculating the carbon dioxide released within a country. According to research by science and policy institute Climate Analytics, Australia also produces another 3.6% in global emissions as a result of coal, oil and gas exports. This latest research, published in July this year, argues that Australia is in fact responsible for nearly 5% of global emissions. In addition, Australia’s population is 0.3% of the global total, meaning this level of global emissions is highly disproportionate, argues Peter Thorne, a climate change expert at Maynooth University in Ireland. “[The 1.3% figure] doesn’t include exports either,” he said. “It ignores the fact that it makes Australia per capita one of the very worst offenders.”

Indeed, Climate Analytics argue that Australia remains one of the world’s highest per capita carbon dioxide emitters. On a per capita basis, they argue, Australia’s carbon footprint, including exports, surpasses China, the U.S. and India.

In February this year, Australia’s sparse drought-stricken lands featured on TIME’s cover. The conditions Australia experienced earlier this year count as the most severe in its modern history. Scientists have long warned that increasingly hot and dry climates, the result of the climate crisis, will lead to a worsening of wildfires around the world. And we are seeing the effects in Australia with unprecedented early fires. The wildfires also aggravate climate change by destroying treats that could absorb carbon in the atmosphere.

“Climate change is a likely factor,” argues Thorne. “It’s changing the odds because it’s hotter and is drier on average in the summer in Australia.”

Thorne said that while it is difficult to attribute particular events exactly to climate change, “what is undoubtedly true is that we are changing and shifting the odds of the events occurring to be much more likely.”

“Historically, Australian emissions have had a demonstrable impact, along with the emissions of other countries.”

The Bureau of Meteorology argue that in southern and eastern Australia, where the fires are currently spreading, they have observed more extreme conditions during the summer months, including an earlier start to the bushfire season. “These trends towards more dangerous bushfire conditions are at least partly attributable to human-caused climate change, including through increased temperatures,” they added.

Morrison has faced criticism this month of avoiding the issue of climate change a group of former Australian fire chiefs. They said that the government “fundamentally doesn’t like talking about climate change” and that politics is getting in the way.

“Just a 1 C temperature rise has meant the extremes are far more extreme, and it is placing lives at risk, including firefighters,” Greg Mullins, the former chief of NSW Fire and Rescue, said on Nov. 14. “Climate change has supercharged the bushfire problem.”

Politicians and mayors residing over areas affected by the bushfires have also been critical of Morrison’s response to the climate emergency. For them, there is no doubt that the devastating bushfires area a result of climate change.

Carol Sparks, the Mayor of Glen Innes, where two people died in early November, argued that the government, including Deputy Prime Minister Michael McCormack, needed to refer to scientific evidence. “I think that Michael McCormack needs to read the science, and that is what I am going by, is the science,” she said.

“It is not a political thing — it is a scientific fact that we are going through climate change,” she added.

Chris Bowen, the Australian Labor Party’s health spokesperson accused the Australian government and international community of not acting quick enough on climate change. “The world, and Australia, has failed to act with appropriate seriousness and haste, and so we will need specific policies to deal with the health impacts of climate change,” Bowen said at a lecture at Sydney University on Wednesday.

“The Australian government needs to be far more proactive in looking for climate solutions,” echoes Thorne. They could easily produce enough renewable energy from wind and solar, not just for themselves but for others.”

Australia’s greenhouse gas emissions continue to rise. Since Morrison’s government scrapped the national carbon price in 2014, total national emissions have increased each year, according to a report published by Australia’s environment department in August this year.

National emissions increased by 3.1m tonnes in the year up to March 2019 and are estimated to be 538.9m tonnes, according to the report. The 0.6% increase in emissions are largely due to the liquefied natural gas (LNG) export industry. 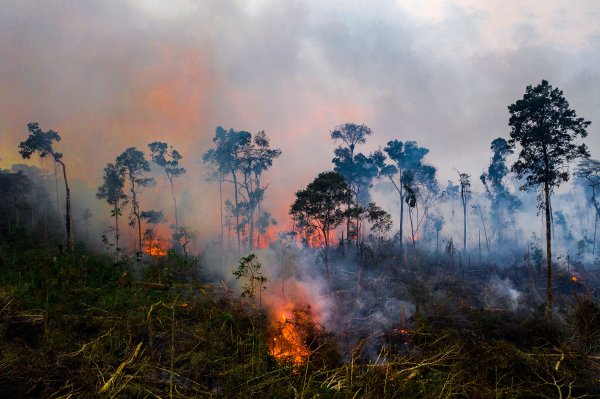 Terrified of Climate Change? You Might Have Eco-Anxiety
Next Up: Editor's Pick