Miami players take in a 59-10 loss to Baltimore on Sept. 8
Mark Brown—Getty Images
Ideas
By Sean Gregory
Gregory is a TIME senior editor.

We live in odd athletic times. Losing has never been this fashionable. Look no further than the 2019 Miami Dolphins, who, as the season was about to kick off, traded two starters for a haul of future draft picks. The Dolphins decided, in modern parlance, to “tank,” or sacrifice the present for the potential of a brighter future. The Fins suffered 59-10 and 43-0 shellackings in their first two games. Then they traded another starter.

Tanking is now an acceptable form of sports behavior, creating stark inequality in the standings. For only the second time ever, for example, four baseball teams lost more than 100 games in a single season. Not coincidentally, four teams won 100 games for the first time in history. The Cleveland Browns gutted their roster to finish 1-31 in 2016 and 2017. The Philadelphia 76ers won 19% of their games from the 2014 through 2016 seasons. “Trust the Process!” Sixers fans would chant, with some trademark Broad Street bitterness. Now, hoops pundits wait for the latest NBA bottom-feeders to emerge. Scouts for the dysfunctional New York Knicks and the injury-riddled Golden State Warriors will surely begin to rack up frequent-flier miles, as they scour the country for the top college prospects they’ll likely select in the 2020 draft.

A few success stories have given tanking its newfound cachet. The Houston Astros lost more than 100 games for three straight seasons earlier in the decade: the Astros won the 2017 World Series and reached the seventh game this year before falling to the Washington Nationals. Cleveland selected quarterback Baker Mayfield with the top pick of the 2018 draft: Mayfield set a record for touchdown passes by a rookie. The 76ers have morphed from a punch line into a playoff contender.

But the wisdom of tanking withers under scrutiny. Houston whiffed on a couple of draft picks and added star players along the way. (The Astros are also now under investigation for reportedly using a camera to decipher the opposition’s pitch signs during their championship season.) The main flaw with tanking in football: even if you are able to draft a future star or two, those players are unlikely to have the same impact on a team’s success as, say, a LeBron James can have on a basketball court. Even the best football players spend about half the game on the sidelines. Plus, those rebuilding Browns, who -finally seemed poised for success, started off the season 2-6. On Nov. 14, Cleveland defensive end Myles Garrett, the team’s top overall draft pick in 2017, struck the Pittsburgh Steelers’ quarterback on the head with a helmet. He’s facing an indefinite suspension.

Even in basketball, the sport where a superstar prospect can propel you to a championship parade, tanking is a suspect strategy. A 2016 study in the Journal of Sports Economics concluded that draft position, or the number of picks, does not predict an organization’s success. Strong talent evaluators, however, are key. “The pickers,” write the authors, “matter more than the picks.”

Finally, not even the tanking always goes as planned. This year’s Dolphins, again, are telling. Despite a front office that set them up to lose—the team’s league-low cash payroll of $141 million is more than $24 million less than that of the team with the second lowest, the Los Angeles Chargers—Miami’s players rallied to win two games in November. Are the Dolphins tanking on tanking? It’s all a bit confounding. Plenty of winners never failed to the top. How about just playing ball? 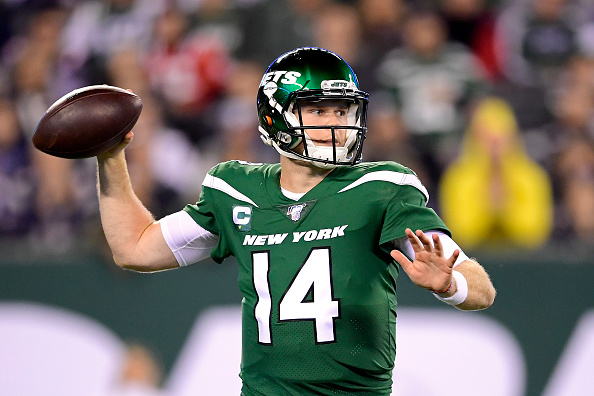 Of Course the Jets Quarterback's Perfectly Reasonable 'Seeing Ghosts' Comment Got Memed Until Dawn
Next Up: Editor's Pick