At least 600 protesters who had barricaded themselves inside a Hong Kong university have surrendered as of Tuesday, following a dramatic, days-long standoff that involved brazen escapes and some of the most violent confrontations seen in nearly six months of unrest.

Local media reported that half of the remaining people who had bunkered down at Polytechnic University since last week handed themselves in Tuesday morning. Cold, hungry and reportedly running low on supplies, the conceding protesters were transported to various hospitals across the city.

Six hundred people have left Polytechnic University since Monday, 200 of them minors, she said.

She added that she told the city’s new police chief Chris Tang Ping-keung to resolve the standoff peacefully.

“This object can only be achieved with the full cooperation of the protestors including of the rioters, that they have to stop violence, give up their weapons and come out peacefully and take the instructions from the police,” she said.

For days, protesters have kept police from breaching the campus, countering volleys of tear gas and rubber bullets with gasoline bombs, slingshots and bows and arrows. One police officer was stuck in the leg with an arrow, while students said some protesters suffered hypothermia after they were doused by water canons in the night.

On Monday, students tried unsuccessfully to break through a police cordon and flee. Wary of arrest and possible imprisonment on rioting charges, many initially defied orders to drop their weapons and emerge.

Their eventual capitulation comes after some got away in a daring escape staged late Monday night. In videos that circulated widely on social media, protesters were seen abseiling down makeshift ropes, hoses and whatever else they could find to waiting motorcyclists who whisked them away from the police encircled campus.

Outside the besieged university that night, hundreds of sympathetic Hongkongers including office workers, ordinary residents and family of those trapped inside came to the students’ aid. They took to the streets and transformed neighboring districts into battle zones, hoping to draw police away from the besieged institution.

Lawmakers, educators and religious leaders turned out to negotiate the release of the students. Sobbing parents and relatives staged a sit-in near a university entrance after they were blocked by officers from going inside.

Police said they arrested or took down information for 1,100 people Tuesday.

Lam said minors exiting the university were not immediately arrested but could be charged later on. Police collected their data and allowed them to go home, she said.

She also appealed to the public to halt violence so that elections for the city’s district council elections can be carried out as scheduled this coming Sunday. “It is the government’s continued, firm stance that we carry out this important election,” she said.

Police chief Tang, who was appointed Tuesday, said he is “heartbroken” over violence in the city. “I hope in the coming days [I] can protect our colleagues and support them in continuing to enforce the law,” he said.

But China’s top legislature claimed Hong Kong courts lack the authority to rule on the constitutionality of the ban, which aimed at preventing protesters from hiding their identity to evade arrest.

By insisting it has the sole authority to rule on constitutional issues, Beijing feeds into protesters’ fears of encroachment.

Hong Kong, which operates an independent judicial system, retroceded to China in 1997 after more than 150 years as a British Colony. The handover agreement permitted the freewheeling city of 7 million to retain considerable autonomy, but the protest movement was fueled in part by concerns that the city’s unique freedoms are being eroded as Beijing tightens its grip.

Skirmishes in Hong Kong have become particularly violent and disruptive in the past week and a half, galvanized by the death of a university student, who died from complications of a fall near an area where police were dispersing a demonstration. Although the circumstances of his death remain unclear, he has been hailed by some protesters as a martyr.

University students, who have been some of the most active participants in the protests which have convulsed the financial hub since June, began occupying five university campuses across the city last week.

Other protesters have shifted their demonstrations, which have convulsed the territory for 23 consecutive weekends, to key commercial areas during weekdays. Across the city, traffic has been gridlocked and businesses have shuttered. The city’s schools have been closed for more than a week. 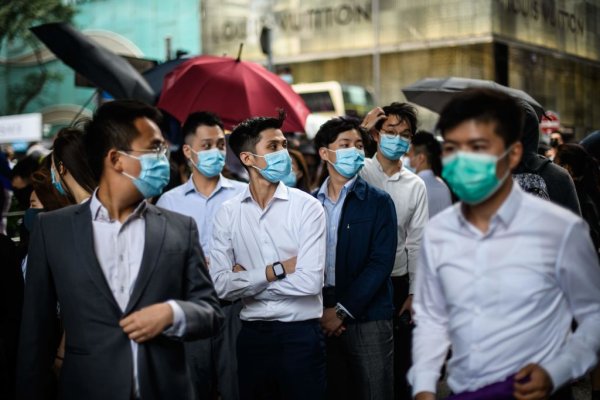 The Bankers and Lawyers Taking Part in Hong Kong's Protests
Next Up: Editor's Pick