The True Story Behind the Movie Ford v Ferrari

There are races, and then there is 24 Hours of Le Mans. For car manufacturers, the historic French competition is the ultimate test of their machines. Lap after lap, hour after hour, drivers at Le Mans negotiate tight corners and top 200 mph on straightaways in a brutal endurance test that pushes automobile engineering to its limits.

Director James Mangold’s new film Ford v. Ferrari (in theaters Nov. 15) tells the story of that competition in the mid-1960s, as American manufacturing titan Ford took on Italy’s Ferrari, the reigning champion of Le Mans. Despite its size, Ford wasn’t exactly a racing powerhouse, with a brand that brought to mind family road trips more than French endurance racing. To stand a chance in the 24-hour circuit, the American corporation brought on two racing legends, Carroll Shelby (Matt Damon) and Ken Miles (Christian Bale) to help them take the European title. Here’s the true story behind Ford v Ferrari.

Carroll Shelby wore many hats, among them designing legendary automobiles

If your goal were to, say, unseat an Italian racing giant, there would be few people better suited to the task than Carroll Shelby (Matt Damon). A WWII flight instructor turned chicken farmer turned race car driver turned builder of legendary automobiles, Shelby was a larger-than-life figure in the world of fast cars through the second half of the 20th century. He was known for his enormous personal magnetism, as a man of big ideas without much patience for details. “He is an entrepreneur who borders on the con man — he is a legitimate con man,” said a friend of Shelby’s in an Autoweek tribute. “It’s the old American success story.”

Shelby didn’t start out building cars — he raced them, and won. When he was still a farmer, he joined his first races in the early 1950s, winning competitions in the American Southwest. In 1954, he began racing for the Aston Martin team, eventually claiming victory at Le Mans for the British carmaker with co-driver Roy Salvadori. Heart troubles eventually forced Shelby to quit competitive racing. He decided that rather than driving fast cars, he would build them. In 1962, he founded Shelby American, an independent sports car manufacturer, which began importing English AC coupes and retrofitting them with powerful Ford engines, dubbing the new creation the Shelby Cobra.

By 1965, Shelby and his team were working on Ford’s new racer, the GT40, which would go on to capture the famous Le Mans title from Ferrari, a performance juggernaut that had won the famous race for six years running.

Ken Miles (Christian Bale), the other half of Ford v Ferrari’s motorsport bromance, was an English race car driver who became the winning man for an American automobile giant. Born in 1918 in Sutton Coldfield, England, according to Motorsport, Miles became an apprentice at an engine manufacturing company as a teenager before joining the British army at the start of WWII, eventually participating in the 1944 D-Day landings.

Miles began racing after the war, eventually racking up an impressive winning record. He joined Shelby’s team, not only to race cars, but also helping to engineering them. He began racing Ford’s new GT40 cars, winning the 1966 Daytona 24 Hours race among a collection of other top spots. In Le Mans that year, Miles led in a Ford GT40 MkII at the end of the race, with two other GT40s following. But in order to engineer a photo finish, Miles allowed the second two Fords to catch up so that they could cross the finish line together. It was a powerful bit of PR for the car manufacturer, but it also cost Miles his victory. The Fords finished in a dead heat, and the Le Mans timekeepers determined that the second GT40 behind Miles had actually started the race from farther back, and therefore won first place.

Le Mans 1966 would be one of Miles’ final races. Later that year, the driver died testing a new experimental Ford in California after the vehicle flipped at 150 mph.

As depicted in Ford v Ferrari, Ford had actually been interested in purchasing the Italian sportscar maker, according to Motorsport. When Ferrari rebuffed the sale at the last minute, Henry Ford II (the grandson of founder Henry Ford, played by Tracy Letts) decided he would have his revenge by taking the Italians’ most prized racing title. But after Ford Advanced Vehicles Ltd. failed to win in 1964, Ford brought on Carroll Shelby, who eventually captured the Le Mans win for the American motor magnate.

Carroll Shelby eventually moved on from the world of auto racing

Racing prospects took a dive in the 1970s, and Shelby, an avid entrepreneur, pursued other ventures, including safari expeditions, chili manufacturing and land development. He also worked with automakers on specialized projects, including a collaboration with Chrysler. Facing continued heart ailments throughout his life, Shelby underwent a heart transplant in 1990, an experience that led him to found a nonprofit committed to raising money for children in need of heart surgery. He died in Dallas in 2012 at 89 years old. 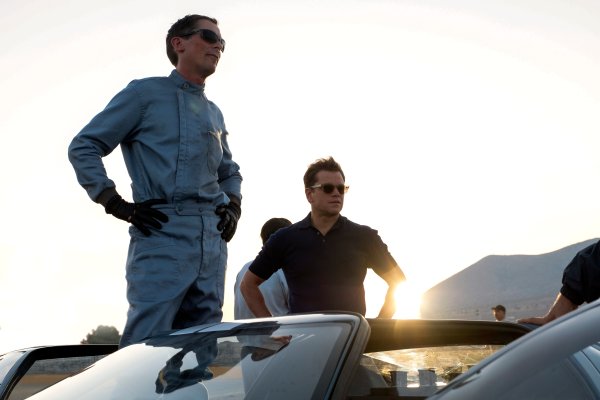 A Gorgeous Ford v Ferrari Demands a Drive to the Theater
Next Up: Editor's Pick