The Day Clocks Changed Across America: What Happened When the U.S. Adopted Standardized Time

Map of time zones into which the U.S. was divided after the adoption of Standard Time on Nov. 18, 1883. Dated 19th century.
Universal History Archive/Group via Getty
By Ainissa Ramirez

Nov. 18, 1883 was a chilly Sunday in New York City. In fact, cold days had become the norm across a swath of the nation, resulting from the sun-blocking ash in the atmosphere from a summertime volcano eruption in Indonesia. But the cold temperatures and this rare geological event were not what made this autumn day so remarkable.

As the sun reached its high point over Lower Manhattan, New Yorkers heard the bells at St. Paul’s Chapel near Wall Street ring 12 times. Then, these New Yorkers heard something peculiar about four minutes later. The bells at St. Paul’s rang again. The second instance was not an error, but the establishment of a new noon. This duplicate tolling of the bells marked the start of standardize time and time zones in the United States. The time in the U.S. was now coupled to Greenwich Mean Time in England.

Before the creation of standardized time, many cities had their own local times based on the position of the sun at high noon. As such, whenever a traveler went to a train station, they would read one of the multiple versions of train schedules based on different local times or they would determine the time of their destination from the numerous clocks mounted on the station’s walls. A person traveling from Boston to the west coast journeyed through 20 different time zones. “The confusion of time standards was the source of unceasing annoyance and trouble,” wrote the New York Herald. To reduce the confusion among customers over what time it was, the railroad managers adopted a standardized time. As such, Nov. 18, 1883 ended that temporal chaos since it was the death of local time.

As the east coast skipped a few minutes and the west coast lost a few hours, there was no fanfare for this occasion, nothing like the golden spike driven in by Leland Stanford, joining the transcontinental railroad in 1869. But the time-zone conversion had an equally lasting effect by connecting the U.S.—and the world—with a golden spike of time. “People joked about it; people fibbed about it; and altogether it afforded such food for Sunday gossip as is only offered by something that goes beyond the public pursuits of men and enters into their private lives as part of themselves,” reported the New York Herald. The New York Times commended the railroads for succeeded in pushing across a change for which “scientific men labored in vain for many years,” and editorialized that it wouldn’t be long before “all intelligent persons will ask why the change was not made years ago.” That this moment mattered was immediately clear, but it would take years to reveal the full impact of the change. This was the beginning of a deep, if quiet, shift within society.

Originally, the sun was the main means of timekeeping, with its broad settings of dawn, high noon and dusk. The creation of the clock moved society away from these designations, but early clocks were still linked to nature since they were set by the local position of the sun. In an effort to make sure a clock had the right time, a traveler would have to advance the minute hand of her clock one minute for every 13 miles she traveled eastward. In fact, a person on one end of Chicago had to set their watch nearly a minute ahead when they reached the other end of the city. The tyranny of the sun’s role in marking midday meant that states had multiple times. As such, newspapers listed various times schemes, since there were 27 local times in Michigan, 27 in Illinois and 23 in Indiana. However, with standardized time, a person knew what time it was across the nation and around the world. Just as today the Internet and telecommunications are believed to link the world, the identical position of the minute hand was a great unifier all over the globe (well, almost).

What happened to society on that day of Nov. 18, 1883, can be likened to a strange phenomenon in physics, which has perplexed scientists and mathematicians for generations. If two ticking metronomes with different rhythms are placed on a table, eventually these metronomes will beat in sync. (These objects are called coupled oscillators.) Christian Huygens, a polymath, inventor and clockmaker, noticed this unusual behavior in 1665. He observed that two pendulum clocks mounted on the wall next to each other had an “odd kind of sympathy” between them, when each started off ticking at their own rhythm but were soon ticking in sync. Why this happens is still an active field of research.

But metronomes and 17th century pendulum clocks are not the only objects that tick together. Modern day audiences have been found to clap in sync. The hearts of choir members have been found to thump as one. Crickets chirp in unison. Even fireflies flash together. What happened to the metronomes, audience members, choir members, crickets and fireflies is similar to what happened to all of society on that Sunday in November of 1883. With the institution of standardized time, our watches—and our actions—fell in sync. 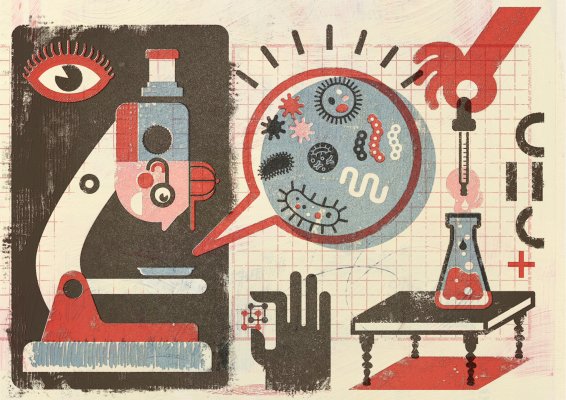 Science Isn’t Always Perfect—But We Should Still Trust It
Next Up: Editor's Pick