On Tuesday night, an American exchange student in Hong Kong received an email from her university back in the States. “Urgent & Important,” read the subject field. It said that because of protests at the Chinese University of Hong Kong (CUHK)—where 20-year-old Sandra had been living since August—her safety was in jeopardy and “mandatory repatriation” was being enforced.

In less than 24 hours, she and about a dozen other students from the same American university arrived at Hong Kong airport with their hastily packed suitcases. Soon after, they were on their flights home.

“In a snap second, everything changed,” Sandra says. The international business student had enrolled in a year-long exchange program at CUHK and was meant to be in Hong Kong until next summer.

Sandra is among the hundreds of foreign and mainland Chinese students in Hong Kong who are leaving the city amid a sharp escalation in protest violence. On Tuesday, CUHK was the site of some of the worst fighting Hong Kong has seen during its five months of anti-government unrest.

Protestors built flammable barricades out of felled trees and classroom furniture. Police dodged flying bricks and petrol bombs and responded with volleys of tear gas and rubber bullets. By the mid-afternoon, the campus was under a pall of black smoke.

On Wednesday, the campus was still occupied by hundreds of students preparing to defend themselves against the police. They erected improvised fortifications, converted the gym into a field hospital and set up a bomb-making factory that was turning out hundreds of Molotov cocktails.

Not surprisingly, the university announced the premature end of the semester. “CUHK had always been this safe haven. If I woke up at CUHK, I knew it’d be okay,” Sandra says. “But suddenly it wasn’t, and it wasn’t so fast.”

Read more: Inside ‘Rioters’ U,’ the University That Has Seen Some of the Worst Clashes in Hong Kong

Taiwan’s representative office in Hong Kong organized airport-bound coaches for 85 Taiwanese students on Wednesday, while the South Korean consulate also reportedly escorted over 40 students out of CUHK. Universities in the Scandinavian nations of Sweden, Norway and Denmark have all urged their exchange students in Hong Kong to consider leaving.

Besides CUHK, at least four other universities have announced an early end to their semesters. Severe vandalism to campus facilities, some students say, has made it impossible for classes to resume as normal. Some have arranged off-campus housing for non-local students until they are able to leave the troubled enclave.

Tiffany, a biology PhD student at the Polytechnic University, left for Shenzhen on Wednesday. With incidents of protestors attacking mainland Chinese become more and more common, the 30-year-old has grown increasingly concerned, as have other mainlanders in the city. She doesn’t like the term “fleeing,” however.

“[It makes us sound] like we are escaping with no dignity,” she says. “We are just worried about our safety. We did nothing wrong.”

Students argue with a Chinese exchange student as they occupy a canteen at the Chinese University of Hong Kong on September 23, 2019 in Hong Kong, China.
Billy H.C. Kwok—Getty Images

Protests have roiled Hong Kong for five months, but have sharply escalated this week, when protestors began a new campaign to cause maximum disruption to the city, in particular the transport network. On Monday, police fired tear gas on a university campus for the first time since the unrest began in June. “We’ve entered a new phase,” one student said.

An Indonesian student at the 108-year-old University of Hong Kong (HKU), who asked to be identified by his last name, Nagasena, flew back home on Thursday. He left because he feared that the violent confrontations that happened at CUHK would happen at his university too.

“When I encounter black-clad protestors, I get kind of scared,” the 19-year-old says. “I avoid eye contact with them.”

If the protests don’t subside, he adds, he will consider transferring to a university in another country.

On campuses across the city, protesters have been hoarding mountains of supplies—food, water, clothes and weapons—as if preparing for a weeks-long siege. At one university, a drained swimming pool became a practice range for protestors learning how to hurl petrol bombs.

The tension is too much for Joseph Tan. The 27-year-old teaching assistant at HKU has booked a flight for Saturday back to his hometown of Singapore. Most of his students, he says, have already left.

“It’s very quiet and calm,” he says. “But it’s not the peaceful kind of calm. It’s the ‘calm before the storm’ kind of calm.” 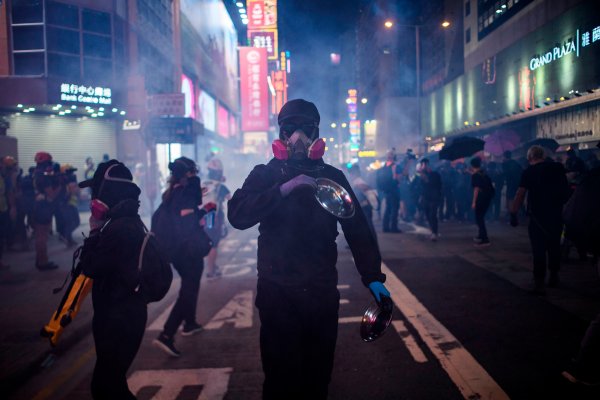 Here's What Travelers to Hong Kong Need to Know
Next Up: Editor's Pick