Even Before the Wall, Berlin's Zoos Were Already Cold War Rivals

The Tierpark in East Berlin in 1965
ullstein bild/Getty Images
By J.W. Mohnhaupt and Shelley Frisch

In early August 1961, a letter arrived at the Berlin Zoo’s administration office. A visitor’s annual pass had been taken away because she’d fed animals without permission. Not so very long before, feeding the animals had still been tolerated. Zoo director Heinz-Georg Klös had hesitated before declaring it forbidden, perhaps because he was afraid of public outcry.

The zoo administrators in West Berlin agreed that the woman ought to get her pass back. She was an elderly East Berliner, and the zoo could not afford to lose the few remaining regular visitors from the Soviet sector. Far too many of them had gone over to East Berlin’s Tierpark in recent years.

The Tierpark covered more than 200 acres, making it the largest zoo in the world—three times the size of its old counterpart in the West. There was a snake farm, which housed tortoises, crocodiles and poisonous snakes that were milked to produce serum from their venom. At the other end of the grounds, workmen had built a peninsula of dark gray granite from the ruins of the city’s central bank, a habitat for polar bears, surrounded by a 280-foot-long moat. “The installation looks so grim because the Stasi financed it,” some visitors joked. Sure enough, an adjacent enclosure bore a discreet metal plaque that read: “This bear ravine was built with a donation by the staff of the ministry for state security”—in other words, by the secret police.

By and large, though, Zoo director Heinrich Dathe was successful at keeping the political slogans and banners that had become typical in East Berlin away from the Tierpark, something Western media noted approvingly. The Tierpark was now the number one recreational attraction in the eastern part of the city and a popular destination for visitors from the West. Both the millionth and the two millionth visitors were West Berliners. In 1958, 1.7 million visitors passed through the eastern zoo’s gates—200,000 more than visited West Berlin’s zoo and aquarium combined. These throngs from the western part of the city tended to annoy East Berliners. Municipal authorities noted that some complained visitors from the West “snap up all the food and drinks,” and that “the way the locals see it, West Berliners get to the Tierpark in the early morning hours in order to lay claim to most of the restaurant seats for themselves.”

But not everyone in the West saw the Tierpark in such an exciting light. In March 1959, a letter from the Berlin Zoo to the president of the West German House of Representatives stated frankly: “The Tierpark represents a danger for us.” Large sections of the grounds had barely been developed, it was true, but Heinz-Georg Klös saw volunteer construction crews busily digging trenches and clearing out undergrowth to prepare for new enclosures. While he’d had to slowly clear his zoo of its run-down, makeshift postwar solutions, Dathe had been given funding to build a modern zoo from scratch. One construction site was particularly alarming: a huge skeleton of concrete slabs and steel fins rising high into the sky. This predator house, on a patch of land more than 50,000 square feet in size, was designed to offer space for as many as 70 big cats.

If Klös wished to outdo his competitor, he would have to add a feature that did not yet exist in the East. And he had something in mind. When West Berlin’s city steering committee next visited the zoo, he suggested pressing ahead with a new ape house. “Apes are hard to get without foreign currencies,” Klös explained. Not to mention that “iron bars are needed for their cages—and they might be even harder to come by than foreign currencies, given the current shortage of raw materials” in the Eastern Bloc.

But the need to entice West Berliners away from the Tierpark would be short lived. Just a week after the elderly woman who’d been illicitly feeding animals was permitted to return, West Berlin’s zoo lost its remaining visitors from the eastern half of the city for good.

In the early morning hours of Aug. 13, 1961, something began that no one had anticipated. East German workers’ militias and armed security forces closed off the border crossings to West Berlin and begun installing barbed wire along the border. In the days that followed, concrete blocks were hauled from all around East Berlin to construct a structure that would define the cityscape in the coming decades. The Berlin Wall ran right through streets and even houses. Wherever necessary the windows were filled with bricks and mortar. Families were separated, West Berlin sealed off. And block by concrete block, the front lines were drawn between the Tierpark and the Berlin Zoo.

In the years to come, their rivalry would become a proxy struggle for a larger battle between East and West, with each zoo an emblem of its city’s—and country’s—politics. And as Heinrich Dathe and Heinz-Georg Klös would, from their opposite sides of the wall, come to understand, victory in this war was no longer a matter of currying favor with visitors, but rather of pleasing the bigwigs in Bonn and East Berlin.

From The Zookeepers’ War: An Incredible True Story from the Cold War, by J.W. Mohnhaupt and Shelley Frisch. Copyright © 2017 by Carl Hanser Verlag München. Reprinted by permission of Simon & Schuster, Inc. 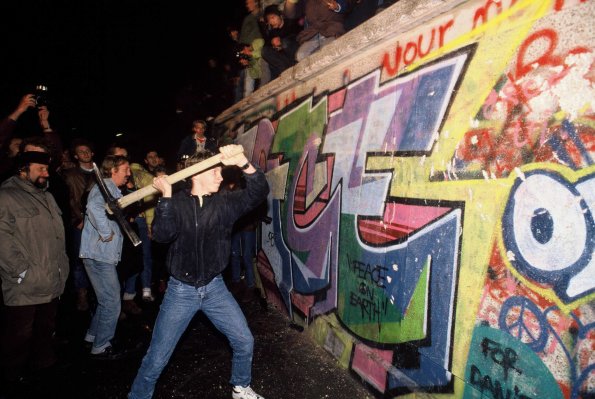 What Happened the Day the Berlin Wall Fell
Next Up: Editor's Pick