'The Gates in the Wall Stand Open Wide.' What Happened the Day the Berlin Wall Fell

On June 12, 1987 — more than 25 years after the Berlin Wall first divided the city’s East and West — U.S. President Ronald Reagan gave a famous speech in front of the Brandenburg Gate in Berlin, challenging his Soviet counterpart Mikhail Gorbachev by declaring, “Mr. Gorbachev, tear down this wall.”

Only a few years later, on Nov. 9, 1989, it was not Mr. Gorbachev but the German people who finally tore down the barrier. The story of the Berlin Wall is one of division and repression, but also of the yearning for freedom — and the events that led up to its toppling are no exception.

Following World War II, at the Yalta and Potsdam peace conferences, it was determined among the war’s victors that Germany’s territories would be split into four “Allied occupation zones.” The eastern part of the country went to the Soviet Union, while the western part went to the United States, Great Britain and eventually France. Berlin, as the capital, would be likewise split.

On May 23, 1949, the three Allied zones became the Federal Republic of Germany (FRG) while the former Soviet occupation zone became the German Democratic Republic (GDR) on Oct. 7, 1949.

Because the city of Berlin was located entirely within the Soviet zone of occupation, West Berlin became an island within Communist East Germany. The economy in West Germany, as a result of the help provided by its occupying forces, quickly grew. The opposite occurred in East Germany. Valuable assets were shipped back to the Soviet Union and economic recovery was slow and stagnant. With many East Berliners fleeing that situation, a physical barrier between the two sides of Berlin, known as the Berlin Wall (die Berliner Mauer), was built starting in August of 1961. It became an ugly scar on the German landscape and a symbol of division in the country.

In total, at least 171 people were killed attempting to get over, under or around the wall. According to German historian Hans-Hermann Hertle in his work Berlin Wall: Monument of the Cold War, between 1961 and when the wall finally came down in 1989, over 5,000 East Germans successfully managed to cross the border by jumping out of windows of buildings adjacent to the wall or climbing over the barbed wire. Some even attempted to cross in hot air balloons, by ramming through in vehicles at high speeds or by crawling through sewers.

But by 1989, the General Secretary of the Communist Party of the Soviet Union, Mikhail Gorbachev, was convinced that the Soviet Union needed reform. He instituted disarmament and a winding down of Cold War confrontations in Europe as preconditions to his reforms. Gorbachev was also in favor of a relaxation of censorship of the press and of the central control of economic matters. This new policy of openness had already resulted in contested elections in Poland in May 1989 as well as reforms in Hungary. It was becoming increasingly clear that the Soviet Union was no longer prepared to support hardline Communist regimes in Eastern Europe.

The Evening of the Fall

In was amid that atmosphere of reform that, on the evening of Nov. 9, 1989, Gunter Schabowski, an East German government official, made a surprising announcement at a press conference.

“Permanent relocations,” he said, “can be done through all border checkpoints between the GDR [East Germany] into the FRG [West Germany] or West Berlin.” This news was set out as an incremental change in policy. But, after reporter Riccardo Ehrman asked when the regulations would take effect, Schabowski replied, “As far as I know, it takes effect immediately, without delay.”

An Official of the Socialist Unity Party of Germany (SED), Gunter Schabowski gained worldwide fame for accidentally beginning the destruction of the inner German border at a press conference on Nov. 9, 1989
Eric Bouvet—Gamma-Rapho via Getty Images

Schabowski’s press conference was the lead story on West Germany’s two main news programs that night, at 7:00 pm and 8:00 pm, with the takeaway being that the Wall, while it still stood, was no longer the firm dividing line it had long been. Since the late 1950s, the two stations broadcast to nearly all of East Germany, and the programs appeared there as well. That night, anchorman Hanns Joachim Friedrichs proclaimed, “This 9 November is a historic day. The GDR has announced that, starting immediately, its borders are open to everyone. The gates in the Wall stand open wide.”

This was all the East German populace needed to hear. Citizens flocked to the border en masse sometime around 9:00 pm and found that, after initial confusion, the border guards were indeed letting people cross. This was a crucial flashpoint in the history between the two sides, as the guards could have easily fired on the crowd. However, according to historian Mary Elise Sarotte in her book The Collapse: The Accidental Opening of the Berlin Wall, no one among the East German authorities wanted to take the personal authority of issuing orders leading to the use of lethal force.

By 11:00 pm, Harald Jager, the commander of the Bornholmer Strasse border crossing, let the guards open the checkpoints, allowing people to pass without their identities checked.

To Jager, it was obvious that the five dozen men guarding the border were grossly outnumbered. He repeatedly attempted to contact his superior, Rudi Ziegenhorn, in order to ascertain how to handle the increasingly chaotic situation, as more and more people gathered at the gates. He was unable to get any clear guidance on how to proceed, but a superior in the background called Jager a coward for being unable to handle the situation. After 25 years of loyal service to the regime, according to Sarotte, Jager felt insulted and pushed to his limit.

Jager was instructed by his superiors to let the biggest troublemakers through on a one-way ticket. But many of these so-called troublemakers were students and other young individuals who briefly entered West Berlin and then returned to the checkpoint for re-entry into East Berlin. However, the GDR was serious in its warnings that this was a one-way ticket. Their angry parents began to plead with officials not to keep them separated from their children, and by that point Jager was unwilling to argue on behalf of his superiors. After Jager made an exception for the parents, others demanded the same treatment as well. Having gone that far, it was simply too late. Thousands of people were demanding that the gates be opened. He was facing a momentous decision — open fire on the civilians, or let them through.

At 11:30 pm, Jager phoned his superior and reported his decision: he would open all the remaining gates and allow the crowds to stream across the border.

West Berliners greeted their counterparts with music and champagne. Some citizens began to chip away at the physical barrier with sledgehammers and chisels. The crowd began to chant “Tor auf!”—Open the gate! By midnight, the checkpoints were completely overrun.

Over that weekend, more than 2 million people from East Berlin visited West Berlin to participate in the mass celebration.

A crowd at the Berlin Wall on Nov. 12, 1989
Thierry Orban—Sygma via Getty Images

Though the “fall” of the Berlin Wall did not mean its complete physical destruction, the consequences of its opening were indeed lasting. Gorbachev agreed on negotiations with the U.S. President George H.W. Bush and West German Chancellor Helmut Kohl to permit the reunification of the two German states, almost completely on West German terms. On a global level, the fall of the Berlin Wall marked the symbolic end of the Cold War, famously prompting the political scientist Francis Fukuyama to declare it the “end of history.”

On Oct. 3, 1990, 11 months after the fall of the Berlin Wall, East and West Germany became one state again. Despite the initial euphoria, the road to recovery for East Germany was long and difficult with economic and social dislocation. And the fallout from the fall continues to this day: citizens were still paying slightly higher taxes than before the merger in order to cover the costs of unification. 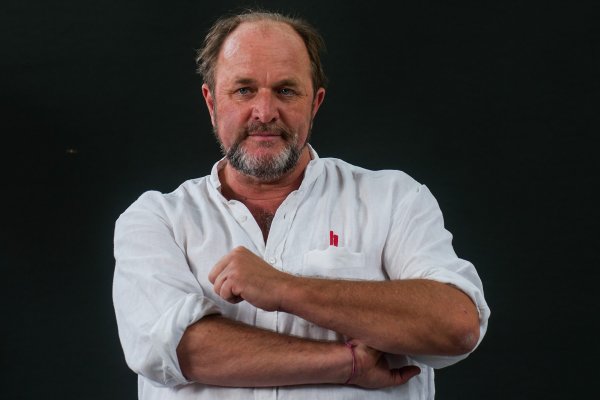 William Dalrymple Talks to TIME About the British East India Company
Next Up: Editor's Pick