Over 300 Killed as Hundreds of Thousands Take Part in Iraqi Protests. What's Behind the Violent Demonstrations?

Iraqi protesters draped in their country’s flag have been taking part in demonstrations since Oct. 1 that have left at least 319 people dead and at least 8,000 injured according to the U.N.

Many of the protesters wear face masks and helmets in the hope that this will protect them from security forces’ use of live bullets, tear gas, stun grenades and sound bombs to disperse the crowds of mostly young protesters. But many have been injured and hundreds of families are left searching for their injured loved ones in hospitals. Activists and physicians have been killed or kidnapped while giving aid to the demonstrators in Baghdad, Iraq’s capital.

Tens of thousands of demonstrators have marched over the past six weeks and the protests have spread across the country. Dr Renad Mansour, a Middle East and North Africa Research Fellow at London-based think tank Chatham House describes the protests as “one of the largest grassroots political mobilizations.” Many Iraqis are frustrated that they are without clean water and electricity, despite the country having large oil reserves. Angered by the lack of jobs and basic public services, many protesters say corruption is to blame; money is being placed in the hands of the few, rather than the many, according to Mansour. Violence quickly became part of the equation, as protesters were met with lethal force by security forces.

Apparently leaderless, the protesters have organized themselves using Whatsapp and Facebook. In response, Iraq’s Ministry of Communications repeatedly disconnected the Internet and blocked social media platforms for periods of time.

Here’s what to know about the protests in Iraq.

On Oct. 1, protests over unemployment, poor public services and corruption erupted in Baghdad, Iraq. As a result of the force used by security forces, the protests escalated and spread across Iraq to major cities including Karbala, Maysan and Basra.

For years, Iraq has been preoccupied in its fight against ISIS. Now that the battle has ended, and a new Iraqi government is in place since May 2018, citizens have looked to the government to deliver their basic needs. But Iraqis have left feeling frustrated about the country’s economic crisis. Many live in poverty, and unemployment levels reaching 8% in 2018 according to the World Bank, and the country is plagued by poor services, including a lack of clean water and electricity outages.

Iraq is the 12th most corrupt country in the world according to NGO Transparency International in 2018. According to Transparency International, since the overthrow of dictator Saddam Hussein regime in 2003, Iraq has faced “significant corruption challenges”. These include a weak capacity to absorb the influx of aid money and a lack of political will for anti-corruption efforts.

Anger has grown with the levels of corruption; protesters believe that money is not going to where it should. For example, despite sitting on a healthy current account surplus, and earning $65 billion in oil export revenue in 2018, Iraq’s government doesn’t provide clean drinking water to the oil-rich region of Basra.

Another factor in triggering the protests, Mansour says, was Iraq’s Prime Minister Adel Abdul-Mahdi’s decision to remove the commander of the country’s counterterrorism service from his post. Abdul-Wahab al-Saadi was popular among Iraqis because of his role in the fight against ISIS, and his removal from his post sparked outrage among his many supporters. “It was largely believed that he was demoted because he was refusing to allow corruption to happen, explains Mansour.

Whilst the protesters initially called for more jobs and basic services including clean water and electricity, the demands quickly became bigger in outlook. They now want to see their leaders held to account for corruption, as well as new electoral laws. Protesters have not only called for the resignation of the country’s political leadership, including the Prime Minister, but also for the entire political system of sectarianism to be overthrown. “It became about ending the system,” says Mansour. “They want a system of government that represents them.”

Tension has been rising between ordinary citizens and the political elite in Iraq. Reform was promised by the new government in 2018, but the same corruption has festered. The overriding feeling among Iraqis is of frustration and disillusionment — they believe the government doesn’t represent them or respond to their basic needs. “Iraqis have realized that all they are getting are new faces that just do the same thing as previous faces,” Dr Lina Khatib, a Middle East and North Africa expert from Chatham House, tells TIME.

“This disappointment is why, very quickly, demands for economic rights escalated into demands for fundamental changes in the political system,” Khatib added.

How many people have died and been injured?

At least 319 people have been killed and at least 8,000 injured since the demonstrations began on Oct. 1, according to details released by the Iraqi Human Rights Commission on Nov. 10. Videos circulating on social media have highlighted how deadly the security forces’ response has been. “All the evidence points to Iraqi security forces deploying these military-grade grenades against protesters in Baghdad, apparently aiming for their heads or bodies at point-blank range,” Lynn Maalouf, Middle East Research Director at Amnesty International on Oct. 31 said in a statement.

Speaking of the people he’s met in Iraq, Mansour says that they feel “depressed and scared”.

“They are in disbelief,” says Mansour. “They didn’t think that the government would shoot gas canisters directly into their heads or bring snipers to kill them and to injure thousands and thousands.”

There are reports that Iran have been involved in direct violence against the protesters in Iraq. “[Iran] have been supporting the security forces. And their loyalist militias in Iraq have infiltrated protests to try and crack down on them and force the demonstrators to go home,” says Khatib.

Protesters have since been protesting about the power Iran holds in Iraq. “Iran is the most powerful external actor in Iraq today. Iran is effectively the power broker,” says Khatib. “It is not in Iran’s interests for the protests to succeed, because it sees them as a threat to its own influence in Iraq.”

The Iraqi President Barham Salih has said he will draft a new electoral law designed to reduce some of the power of political factions, and when passed, Salih will call new elections. He has also said that Prime Minister Abdul-Mahdi has expressed a willingness to resign once political leaders agree on a replacement, but it remains uncertain as to whether this will happen.

But protesters continue to spill out onto the streets because they are no longer convinced by concessions from government. In 2016, protesters stormed the Parliament and Prime Minister Haider al-Abadi promised reform and that he would change his cabinet. “In the past, concessions were only cosmetic in nature and did not lead to a real solution to the problems that the protesters were demonstrating against,” says Khatib.

How has the international community responded?

The U.N. Assistance Mission for Iraq called on Iraqi politicians to take a series of measures to help end the crisis on Nov. 10. Among the measures were for the politicians to prosecute those responsible for the use of excessive force, to call on all regional and international parties not to interfere with Iraq’s internal affairs, as well as to submit a new electoral law to Parliament.

The U.S. has stressed its concerns over the deaths of protesters in Iraq on Nov. 10 in a statement. “Iraqis won’t stand by as the Iranian regime drains their resources and uses armed groups and political allies to stop them from peacefully expressing their views,” the statement read. “Despite being targeted with lethal violence and denied access to the Internet, the Iraqi people have made their voices heard, calling for elections and election reforms.

How does this demonstration fit in with Iraq’s history of protests?

Iraq has seen several waves of protest movements over the past decade, but the current protests are the largest in Iraq since dictator Saddam Hussein fell in 2003. The level of grassroots activism involved in the current protests is what makes it different, say experts. Instead of traditional forces, whether it’s a political party or leaders of groups, being behind the mobilization, this time it was the citizens of Iraq who made this happen. “It was sporadic,” says Mansour.

They are more widespread than the previous protest movement in August of 2018, which had the same demands but now there are calls not just for the resignation of the current government but protesters want to overthrow and change the entire political system.

What next for Iraq?

The protests will continue, experts argue. “As long as the ruling elites of Iraq do not seriously address the real issues that the protesters are driven by, Iraq is going to continue to see waves of street mobilization,” argues Khatib. She believes that even if the protests are eventually crushed by Iraqi security forces, the protests will erupt again. “This could threaten the stability of the country,” she added.

Across the Middle East region, citizens now believe that they are living under systems of government which don’t represent them, or respond to their basic needs. Instead, the system represents the interests of a small elite. In Lebanon, as in Iraq, leaderless protests are rising up to achieve their goal—to bring down the government and change the system. “So you’re seeing more protests and more contentious politics throughout the region,” argues Mansour. 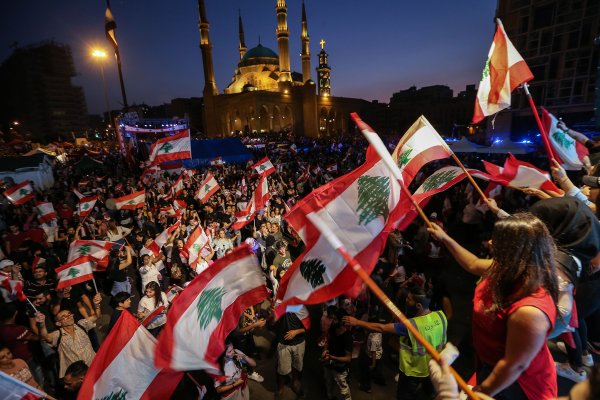 'This Revolution Has Raised the Bar.' How Lebanon's Protests Have Created a Surprising Space for LGBT Rights
Next Up: Editor's Pick