A member of the Iraqi antiterrorism forces waves the national flag in celebration after securing a checkpoint from Sunni militants in the village of Badriyah, west of the Iraqi city of Mosul, on Aug. 19, 2014
Ahmad Al-Rubaye—AFP/Getty Images
By Mark Thompson

A force of 30,000 Sunni and Shi‘ite fighters, both soldiers and militia, launched a large-scale offensive Monday to push the Islamic State of Iraq and Greater Syria out of Tikrit, Saddam Hussein’s hometown.

Eighty miles northwest of Baghdad, Tikrit could serve as a model for the coming — and much bigger — battle to retake Mosul. ISIS seized Iraq’s second largest city, as well as Tikrit, last summer in a humiliating defeat for the U.S.-trained Iraqi forces.

General Abdul-Wahab al-Saadi, the local Iraqi military commander, told Iraqi state television that the assault was “going on as planned,” primarily from the east. Iraqi warplanes were attacking targets in and around Tikrit, Iraqi TV added. A Pentagon spokesman said that while the U.S. government had received prior notice of the attack, no U.S. warplanes are involved. He also declined to comment on reports that Iranian forces are playing a role.

Pentagon officials said the Iraqi army’s success in retaking Tikrit is vital if the planned assault on Mosul is to remain on track. In recent months, the timetable for launching that counteroffensive has ranged from next month to next year, according to U.S. military officials.

Mosul is ISIS’s key Iraqi redoubt, and so long as it controls the city it will hold sway over much of northern Iraq. Tikrit, three hours south of Mosul on Iraq’s Route 1, is an important transit hub between Baghdad and Mosul. It would give the central government an important logistical hub from which to fuel its Mosul offensive.

Iraqi forces have failed in previous efforts to retake Tikrit. But Monday’s offensive comes after Iraq’s new Prime Minister, Haider al-Abadi, visited Iraqi forces on the eve of the operation and said “zero hour” for taking back Tikrit had arrived.

He addressed the Iraqi people in a televised address Monday. “Today, God willing, we start an important military campaign to liberate the citizens of Salahuddin province which includes Samarra, Dhuluiya, Balad, Dujail, al-Alam, al-Door, and Tikrit and other areas in the province from ISIS,” al-Abadi said. “Our goal is to liberate people from the oppression and terrorism of Daesh,” he added, using the Arabic acronym for ISIS.

Western Iraq’s population largely belongs to the Sunni Muslim sect, as does ISIS. The prior, Shi‘ite-dominated Iraqi government of Prime Minister Nouri al-Maliki, angered Sunnis with its oppressive governance that sidelined Sunnis. It is not clear whether or not the more inclusive approach of al-Abadi, also a Shi‘ite, since taking office in September has succeeded in easing those wounds.

On Feb. 19, a senior official at U.S. Central Command in Tampa, which oversees U.S. military operations in Iraq, told reporters that U.S. officials hoped an Iraqi-led attack on Mosul could begin as soon as April. “But by the same token, if they’re not ready, if the conditions are not set, if all the equipment that they need is not physically there and they are [not] trained to a degree in which they will be successful, we have not closed the door on continuing to slide that to the right” further into the future, the Central Command official said.

Despite that caveat, some U.S. military officials have derided any suggestion that the Iraqi military would be sufficiently trained and outfitted to storm Mosul as soon as April.

Rear Admiral John Kirby, the Pentagon spokesman, said last Friday that it still might happen. “This is going to be and must be an Iraqi-led operation, and that more critically, we’re not going to be able to go, nor do we want to go any faster than the Iraqis are ready to go,” he said. “I just can’t put a date certain on there and say it’s going to happen at a certain time, nor am I prepared to, you know, rule something out and tell you definitively, ‘Well, April’s out.’” 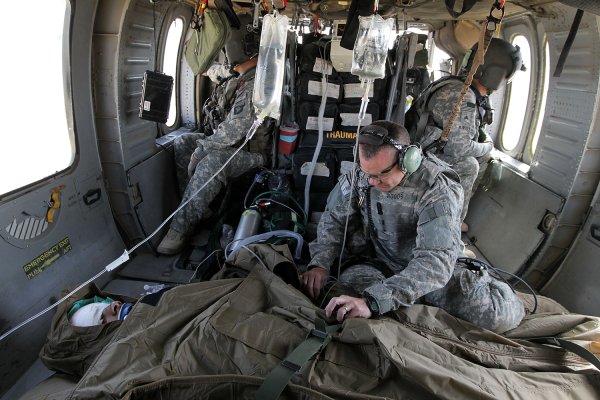 U.S. Has Longest Period Without Combat Death Since 9/11
Next Up: Editor's Pick