Hong Kong's Police Watchdog Is Unable to Do Its Job, Experts Say

Riot police secure an area in a shopping mall during a demonstration in Hong Kong on November 10, 2019.
Anthony Kwan—Getty Images
By AMY GUNIA / HONG KONG

Hong Kong’s police watchdog lacks the power to conduct an investigation into the police force’s handling of months of protests in the city, a panel of experts appointed by the enclave’s government said in a report issued Friday.

The report’s findings are a major blow to Hong Kong’s embattled leader, Chief Executive Carrie Lam, who has insisted that the Independent Police Complaints Council (IPCC) is capable of conducting an independent investigation.

The findings will also strengthen the hand of protesters, who for months have been calling for an independent probe into the police.

Hong Kong’s IPCC has a shortfall in “powers, capacity, and independent investigative capability necessary to match the scale of events and the standards required of an international police watchdog operating in a society that values freedoms and rights,” according to a statement posted on Twitter by panel member Clifford Stott.

“Structural limitations in the scope and powers of the IPCC inquiry remain, inhibiting its ability to establish a coherent and representative body of evidence,” the statement read.

It went on to add that the IPCC may only be able to provide an “interim report, with limited but sufficient facts to allow preliminary conclusions to be drawn on some of the divers of the protest, the handling of key events, and the evolution of the disturbances.”

An independent inquiry into the police force is one of Hong Kong protesters’ five key demands. Only one demand — the total withdrawal of a controversial extradition bill which would have allowed China to put criminal suspects on trial in the mainland legal system — has been met.

Experts say that the report’s findings may force the government to take further action.

“This will put additional pressure on the Hong Kong as well as the central government to agree upon setting up a true independent commission of inquiry,” Jean-Pierre Cabestan, a professor in political science at Hong Kong Baptist University, tells TIME.

“It has demonstrated that the IPCC is ill-equipped to conduct an independent investigation of police brutality — a lack of capacity [that] many in the Hong Kong community have suspected from day one.”

“These views are for the council of the IPCC to consider and it is not for me to comment in individual advice tended by overseas experts,” she told reporters. “What the IPCC is undertaking is a very difficult and complex exercise and I have confidence that the IPCC will spare no efforts.”

The panel — comprised of five experts on police tactics from the U.K., Australia, New Zealand and Canada — was appointed by the IPCC in early September to help provide advice on its practices and procedures.

Hong Kong’s police force has faced public backlash for its handling of the protests. Rights group Amnesty International has criticized the force’s “reckless and indiscriminate tactics” and the United Nations High Commissioner for Human Rights said that the extent of violence during the months of unrest warrants an independent and impartial investigation.

The panel’s statement was issued as Hong Kong was gripped by its 23rd straight weekend of anti-government protests. Tensions have escalated after a 22-year-old university student died on Friday, several days after sustaining injuries during a fall from the third story to the second story of a car park, near the scene of a street battle between protesters and police.

On Monday morning, a protester was reportedly in critical condition after police fired live bullets as protesters caused major disruptions to transport networks.

“After what happened the past weekend and this morning the commission is more necessary than ever as a first step to find a solution to the current crisis,” Cabestan says. 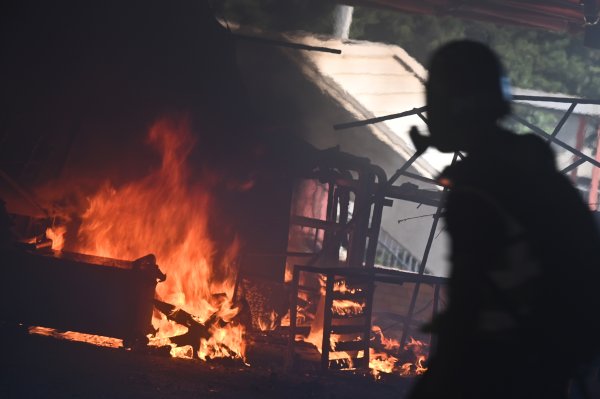 Unrest Across Hong Kong as Protesters Call for Strike
Next Up: Editor's Pick