Russian President Vladimir Putin attends a bilaterlal meeting at the Russian-Kazakh Regional Forum on in Omsk, Russia on Nov. 7, 2019.
Mikhail Svetlov—Getty Images
Ideas
By Peter Pomerantsev
Pomerantsev is the author of This is Not Propaganda: Adventures in the War Against Reality. He is a Visiting Senior Fellow at the Institute of Global Affairs at the London School of Economics, an author and TV producer. He studies propaganda and media development, and has testified on the challenges of information war.

On November 9th, 2019 we mark the thirty year anniversary of the fall of the Berlin Wall—a year synonymous with the end of the Cold War, the ideological defeat of the USSR, the victory of freedom of expression over censorship, democracy over authoritarianism. Thirty years later talk of Cold War with the Soviet Union have been replaced with “Information War” with Russia, referring to the mix of hacks and covert social media campaigns the Kremlin used to influence the 2016 U.S. election, a mere psy-op scratch compared to the larger campaigns it launches against its neighbours in the region. Barely a week goes by without some new policy report (I’ve authored at least two myself) or a former official warning the U.S. is losing the ‘information war’. But it’s a concept that should be treated with caution. Inside Russia ‘information war’ has grown to represent much more than a mere set of media tricks. It’s a worldview and an interpretation of history that annuls the values victorious in 1989, and it’s becoming more popular across the world. As I explored in my latest book, the most dangerous part of information war could be the idea of information war itself.

Using “information war” as a way to understand history first obsessed a certain breed of Russian geopolitical analyst looking to explain the failure of the Soviet Union. In the very late 1990s and the 2000s they began to assert the Soviet Empire collapsed not because of its poor economic policies, human rights abuses, lies, but because of “information viruses” planted by Western security services through Trojan horse ideas such as freedom of speech and economic reform. According to this revisionist version of history, alleged agents in the Soviet Establishment who posed as so-called modernisers, allied with a Washington-dictated fifth column of anti-Soviet dissidents, oversaw the dissemination of these ‘viruses’.

At first these grand ‘information war’ theories were not in the Russian mainstream. But as the Kremlin searched for ways to explain revolutions against kelptocrats and authoritarians abroad, as well as the growth of discontent at home, this all-pervasive information war philosophy became increasingly amplified by TV spokespeople and spin doctors, becoming something akin to state dogma in the aftermath of Russia’s invasion of Ukraine in 2014. Today, runs the argument, the West wages information war against Russia through everything from anti-corruption investigations of the Russian elite, anti-doping investigations of the Russian Olympic team, the support of human rights NGOs and public broadcasting into Russia. This is a world view where all values, ideals, ideas are mere fronts to subvert the other side, where there is no qualitative difference between independent journalism and a covert social media psy op. This September, for example, a Russian Parliamentary committee charged the German public broadcaster Deutsche Welle with “interference” in Russia for broadcasting coverage of protests in Moscow against Putin’s rule, as if to equate the Kremlin’s hacks and deceptive social media operations in the U.S. with genuine reporting.

Russia, so goes the logic, has to compete in this deeply rotten world. According to the editor in chief of the Kremlin’s international news network, Russia Today (RT) is needed “for about the same reason as why the country needs a Defense Ministry” and is capable of “conducting information war against the whole Western world,” using “the information weapon.” This ‘information war’ world view is used to pursue the Kremlin’s global policy goals. Russia (as well as China) increasingly advocates for a ‘sovereign’ internet where censorship is normalized, rationalized by the idea that freedom of expression is just a weapon wielded by the perfidious West. The “information war” world view is now used to argue for a “multipolar” world where there are no universal norms, just zones of influence. The ideals of 1989, with its dream of universal human rights values flourishing in a borderless world are undone in the framing of this “information war.”

And the bad news is that this world view is catching on across the world–and not just among authoritarian states such as China looking to explain away protests at home as part of a Western plot. The U.S. has long had its own fringe conspiracy “info-wars” media. But these days one also hears the U.S. President and his acolytes describe criticism against him as part of a vast media plot. This world view doesn’t stop at America’s borders. In recently released transcripts Donald Trump told the Russian foreign minister in 2016 he didn’t mind Russia’s covert social media campaigns in the US as America “did the same in other countries.” The U.S. President’s frequent assertions that the U.S. should not support democratic values across the world, his deeply transactional, ideals-free outlook rhymes perfectly with the Kremlin’s own.

But even for those who do not support the Kremlin or Trump the abundance of deceptive campaigns on the the internet makes it tempting to slip into a world view where one feels surrounded by endless manipulation. The use of bots, trolls, cyborgs across the world is booming. From China to Poland, Iran to Ecuador governments and political parties are creating covert campaigns to boost their side or subvert the other, the cumulative effect being to destroy any shared reality and erode trust. And it’s not just governments, anyone can play at info-warrior. On closed internet groups belonging to the Identitarian Movement, for instance, a European far right group that wants to rid the continent of Muslims, you can download an ‘Information War Manual’ where you will be instructed how to coordinate online in order to taunt mainstream journalists (known as “sniper missions”), post nasty comments on the Facebook pages of politicians and plan “dislike” campaigns on YouTube to ‘vote down’ videos of your opponents. If you get into an online “dog-fight” with the enemy, a debate you can’t win, then you post to the hashtag #Air Support and other Infokrieg members will come to your aid, spamming the conversation with their taunts.

Even as journalists and analysts expose such information operations, whether from states like Russia or extremist groups, do we risk reinforcing a world view the Kremlin wants—that all information is just manipulation? Even the language used in describing the Russian operations in the U.S., words like “meddling” and “interference,” carries with it an implicit criticism of information flowing across borders, one of the most hard fought victories in the Cold War.

This is the Information War Catch-22. We need to expose covert information operations–without starting to see information as something inherently dangerous. To truly win the information war you have to avoid the underlying cynicism and conspiracy thinking implicit in the very idea of information war itself 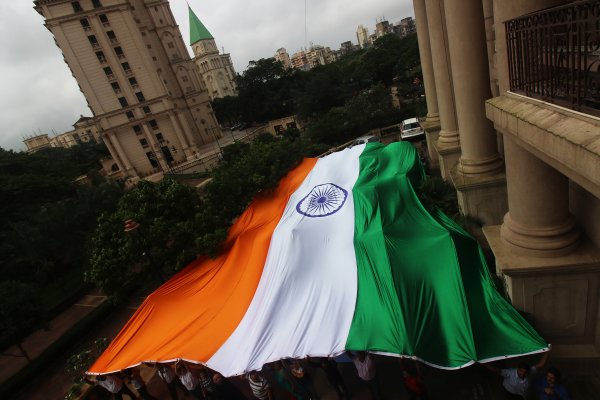 I am Indian. Why Is the Government Sending Me Into Exile?
Next Up: Editor's Pick