Mikhail Gorbachev: 'In 1989 the World Chose Peace; We Need That Vision Today'

Gorbachev attends a rally in East Berlin celebrating the 40th anniversary of the G.D.R. in October 1989
Jansson/Ullstein Bild/Getty Images
Ideas
By Mikhail Gorbachev
Gorbachev, a Nobel Peace Prize laureate, was the only President of the Soviet Union.

The Berlin Wall, which for decades had divided not just a city but a country, and all of Europe, fell in November 1989, and history accelerated its march. Such moments test the responsibility and wisdom of statesmen.

The long overdue changes in the countries of Central and Eastern Europe had received a powerful impetus from the democratic process already under way in the Soviet Union. The demands of the people were getting increasingly urgent and radical.

In the fall of 1989 the situation in East Germany–the G.D.R.–became explosive. Large groups of people were leaving the country; people were fleeing en masse through Hungary and Czechoslovakia, which had opened their western borders. In major cities, people took to the streets, protesting peacefully, but violence with consequences beyond anyone’s control could not be ruled out.

In October 1989, I attended the festivities in East Berlin marking the 40th anniversary of the G.D.R. As I stood on the rostrum, greeting the columns of participants in the parade, I felt almost physically the people’s discontent. We knew that they had been carefully pre-selected, which made their behavior even more striking. They were chanting: Perestroika! Gorbachev, help!

Subsequent events confirmed that the G.D.R. regime was rapidly losing ground. The protests and the political demands–from freedom of emigration to freedom of speech and the dissolution of government bodies to the reunification of Germany–were gaining momentum.

The fall of the Berlin Wall was therefore not a surprise for us. The fact that it happened on Nov. 9, 1989, was the result of specific circumstances and the evolution of popular mood.

In those conditions, the Soviet leadership’s first step was to rule out military force by the Soviet troops stationed in the G.D.R. At the same time, we did our utmost to make sure that the process moved along peaceful lines, without infringing on the vital interests of our country or undermining peace in Europe.

That was extremely important, because after the fall of the Wall the developments in the G.D.R. became increasingly turbulent. Reunification of Germany was now on the agenda, and this was bound to cause concern among Soviet citizens, many of whom were alarmed.

Their concern was understandable, both historically and psychologically. We had to reckon with the people’s memory of the war, of its horrors and victims. Of course the Germans had changed; they had learned the lessons of Hitler’s reign and World War II. But there are things that cannot be erased from history. I told Chancellor Kohl, it is important for the Germans, in managing unification, to respect the feelings of other peoples as well as their own interests.

We were not alone in our concerns. The Federal Republic of Germany’s (F.R.G.) NATO allies–France, Great Britain, Italy–did not want a quick reunification. I understood that from my talks with their leaders. In each of the countries that had suffered from aggression, there were fears–as though in their very genes–that the unification of F.R.G. and G.D.R. would increase Germany’s power. They had serious, though unspoken, historic and political reasons for such fears.

I think that NATO’s European members would not have been averse to using Gorbachev to put a brake on unification. But I understood that resisting a process that was objectively inevitable and, even more so, to use force in any form could lead to unpredictable consequences: an explosion in the center of Europe, a resumption of the Cold War, and who knows what else! It was the duty of all of us to avoid that.

Today, reading some comments and reminiscences of that time, one might get the impression that the process of reunification was a cakewalk, that everything came like manna from heaven, or that it all happened as a result of happy chance or even naiveté of some parties. But that was not the case.

The two plus four negotiations involving the two German states, the Soviet Union, the U.S., France and Britain could not be an easy ride. There were contentious discussions and clashes of opinion, and it sometimes seemed that misunderstanding would doom the negotiations.

But they ended in success, because the parties to this complex diplomatic process showed foresight as well courage and a sense of high responsibility.

Yet, when I am asked who I regard as the main hero of that time of drama and turmoil, I always reply: the people. I am not denying the role of the politicians. They were very important. But it was the people–two peoples–who mattered the most. The Germans, who declared their will for national unity decisively and, most importantly, in a peaceful way. And of course the Russians, who understood the Germans’ aspirations, who believed that Germany had indeed changed and supported the will of the German people.

Russians and Germans can be proud that after the war’s tragic bloodshed they understood each other. Had they not, the Soviet government would not have been able to act the way it did.

We drew a final line under the Cold War. Our goal was a new Europe: a Europe without dividing lines. The leaders who succeeded us have failed to achieve that goal. A modern security architecture, a strong mechanism for preventing and resolving conflicts have not been created in Europe. Hence the painful problems and conflicts that beset our continent today. I urge world leaders to face up to those problems and resume dialogue for the sake of the future.

Gorbachev, a Nobel Peace Prize laureate, was the only President of the Soviet Union 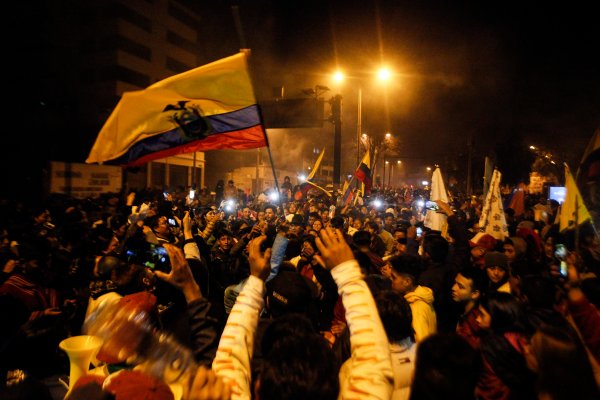 What Happens Next in Ecuador
Next Up: Editor's Pick