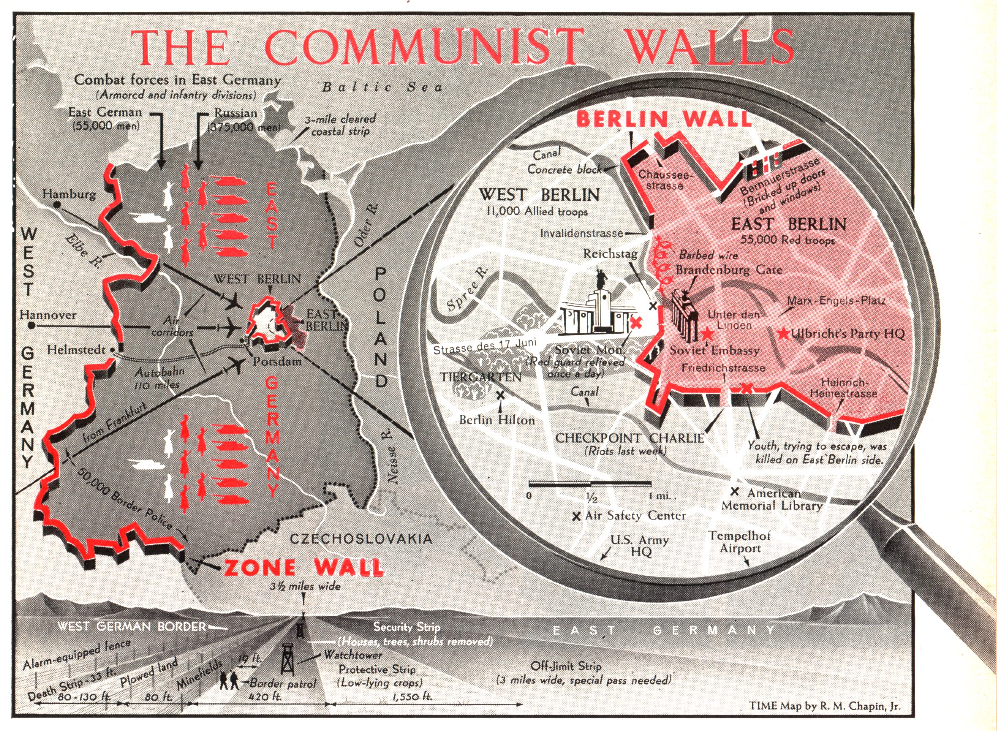 For a structure that stood only about 12 ft. high, the Berlin Wall left quite a mark on modern history. Throughout the 28 years during which it endured, TIME followed the wall’s surprise construction, those who died attempting to get across, and finally its fall and aftermath.

You can trace that tale through our timeline of the Berlin Wall’s history or, below, read how the wall went down in the words of those who were watching it happen:

The Berlin Wall went up quickly and with no warning on Aug. 13, 1961. Though it was at that point less a wall than a fence, it startled the world. For nearly a decade, Berlin — a divided city situated within the Eastern portion of a divided country — had been the easiest way to cross from East Germany to West, but the East had been facing a dwindling population and took drastic measures despite earlier promises to preserve freedom of movement:

A year later, protests erupted in West Berlin, sparked by cruel treatment of an attempted escapee named Peter Fechter — who was shot and left to bleed in the no-man’s-land between the two sides. TIME explored whether extended violence and further protest was likely to become a constant in the divided city, finding that many Berliners believed such an outcome unlikely but felt that the Wall would stand for the rest of their lives:

On the 25th anniversary of the wall’s construction, TIME checked in on the city and found that Germans on the two sides of the Wall had evolved into two very different groups of people. West Berlin was more modern, East Berlin was quieter, their economies were distinct — but Berliners from both sides still harbored hopes that they would one day be reunited. Even with a quarter-century of division under their belt, they felt that they could all get along:

The Berlin Wall had already been the site of much speechifying when President Ronald Reagan appeared there in 1987 — but by that point, something that changed. In the USSR, the words glasnost and perestroika had entered the political vocabulary. Mikhail Gorbachev spoke of openness, and his influence in East Germany presented a glimmer of hope that the Berlin Wall might not be forever. Reagan urged that hope on with one of the most famous lines of his career: “Mr. Gorbachev, tear down this Wall.”

On the occasion of Eat Germany’s 40th birthday, the Berlin Wall had begun to lose its oomph. Originally meant to prevent traffic between the two sides of the city, it was made far less effective when it became possible to get to West Germany by other routes:

Until the Wall fell at midnight on Nov. 9, 1989 — losing its power as suddenly as it had gone up, though it would take many months for the concrete to be dismantled — TIME had been planning to run a cover story about the election of the first black governor in the United States, Doug Wilder of Virginia. But, as then-managing editor Henry Muller recounted in a letter to readers, “then came the stunning announcement that East Germans be allowed to travel through the Berlin Wall and would be granted freer elections as well. Bonn bureau chief Jim Jackson called me to urge that we change the cover, but my fellow editors and I hardly needed to be persuaded.” The result was 12 pages of reporting and photography and, as Muller put it, “history as it is made, each day and each week”:

Coverage of the wall’s fall wasn’t all about serious pronouncements on the future of Europe. There were also some gems like this one, the story of some American entrepreneurs who were marketing chunks of the Wall as timely gifts for that holiday season:

About a month after the Wall fell, TIME gathered five experts on European politics and economics to predict what would be next for the continent — including whether the end of the Wall would inevitably lead to the reunification of Germany:

Read more about the fall of the Berlin Wall here in TIME’s archives, where the Nov. 20, 1989, cover story is now available.

HBO Thinks It Can Grab 5 Million Cord-Cutters With New Service
Next Up: Editor's Pick